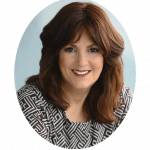 In her latest young adult novel, The Assignment, author Liza Wiemer asks readers what they would do to stop antisemitism—or any form of hate or injustice. Would they publicly speak up or stay silent? Published by Delacorte Press, The Assignment has won numerous state and national awards, including being named a Sydney Taylor Notable Book. Wiemer has spoken at over 150 events across the country including book festivals, book clubs, Holocaust centers, middle and high school classes, teacher organizations and women’s groups. She can be reached at lizawiemer.com and is interviewed below.

The plot of your book is about two teenagers who speak up against a Holocaust school assignment, defying their teacher, principal and classmates. Where did the idea come from?

In 2017, I saw a news story on Facebook about Jordan April and Archer Shurtliff, two teens in Oswego, New York, near Syracuse, who refused to do a school assignment on the Holocaust that included arguing for the extermination of the Jews. Neither teen was Jewish. After meeting Jordan in a chance encounter, I got in touch with them, saying I would like to write a novel about what transpired. I assured them, “It’s not going to be about you, it’s going to be inspired by your actions.”

What research did you do?

The book took a tremendous amount of research. I returned to Oswego and met up with Jordan and Archer. One of the places we visited was Fort Ontario, which housed 982 European World War II refugees, mostly Jews, and was the only refugee camp in the United States. The fort plays a pivotal role in the novel. I also interviewed numerous experts, viewed original documents and examined antisemitism on social media.

How does the book reach people who don’t care about tolerance, diversity or inclusiveness­?

Reaching students is key, and so I’m grateful The Assignment is being utilized in school districts across the country. In my home state of Wisconsin, Holocaust education will be mandatory for the 2022/23 school year. Our Holocaust Education and Resource Center feels so strongly that this novel makes a difference that they have already begun to provide free books to schools, and some schools incorporated the book into their curriculum this year. I also speak to teacher groups around the country.

Yes, the subject matter hits home with many of us on a deep personal level. However, I hear from as many non-Jewish readers as Jewish readers—from 11-year-olds to people in their nineties. Many say that they wonder what they would have done in this situation as a student or a teacher or a parent.

Why do you think so few people speak out openly against hate?

The number one reason, especially for young adults, is the fear of becoming a target for bullying and retribution. Another reason is that many people feel they need to be polite or to mind their own business. We also have the instinct to fight, flee or freeze. One of the reasons I wrote this book is to empower readers to rise above instincts and fears and become upstanders. It portrays how speaking out can be a challenge, but is critical for positive change.

Antisemitism is not new, so why are we so focused on it now?

Because it has become acceptable. Generally, there has not been pushback and we are not seeing many allies in the non-Jewish community stepping up to say, “This is wrong.” People today are able to hide their identities on the internet, spreading hate under a blanket of anonymity. Social media sites must do a much better job to remove it. Silence only allows antisemitism to grow.

There is also a lot of ignorance about what is antisemitic. At many of the schools I’ve been to, I am the first Jewish person they’ve met. Thankfully, The Assignment is having a direct, concrete impact on stopping antisemitism.

Assignments like the one in this novel are way more common than any of us could imagine.

People who’ve read the novel have reached out to tell me about similar assignments, leading me to intervene. The results have been rewarding. On several occasions, I’ve contacted the ADL, which has been instrumental.

How are parent and teen relationships portrayed in the book?

I include both positive and challenging relationships between teens and their parents. Parents should be role models, but they’re not always. It’s important to recognize the power adults have over children and young adults, and how they often silence them. We need to value the voices of our young adults.

What is your hope for readers of The Assignment?

Assignments like the one in this novel are way more common than any of us could imagine. This book not only brings awareness, but it’s my hope it will inspire and empower others to speak up against all forms of hatred, bigotry and injustice, promote allyship, and prevent assignments like this from being given in the first place. It’s also my hope readers will gain a new perspective on history. We hear, “If we don’t learn history, we’re doomed to repeat it.” History continues to inform, impact and influence us today. It’s as much a part of our present as our past. Seeing this connection is critical for positive change.