Kyiv Diary 3/20/22: ‘Heartbroken Adults Are Forced To Leave the Elderly Behind’

These last nights were quiet. But nevertheless, we stayed awake savoring the silence, the quietness of the night without the never-ceasing sounds of sirens and shelling.

Yesterday I met with Viktoria, a Croatian designer with whom I have been working for many years. Over that time we have built a very strong friendship. She arrived in Kyiv on business right before the war. When the war broke out, she had a chance to go back home to Croatia but decided to stay and volunteer.

She checked out of the hotel and moved in with an elderly man to take care of him. He is almost 90 years old, a Jewish widower with many health problems. She is sleeping on an inflatable mattress in the hallway of his one-room apartment, but I haven’t heard any complaints from her. His grown children left for Western Ukraine in fear for their own kids. They were forced to leave their grandfather behind. There are many cases like this. Families get separated and heartbroken adults are forced to leave the elderly behind because old folks have mobility issues and the journey to the west of Ukraine could be a life-threatening expedition for them. But there are many who stayed, and now we are all united and help each other get through the disaster.

So, Viktoria and I met in one of the central parks midway between our apartments. She looked out-of-this-world, like an alien, in all her own beautiful conceptual design outfits. But that’s all she has in her wardrobe to wear. We saw a couple of kids on the playground and the sounds of sirens didn’t seem to bother them. We sat on a bench but not just to chat. We had a project of making our “hairdos.” None of us is a professional hairdresser of course, and you would hardly call it a salon experience. Having come prepared with scissors, we managed to trim our hair right there on the bench in the park. Luckily it was sunny and our heads were washed with the daylight; unfortunately, it was very cold and our hands were freezing. Now we’ll be volunteering in style.

On our way home we saw a young man who went for a run. He was wearing shorts and a T-shirt. The temperature was below 32 degrees! Surrealistic picture: empty streets with a woman decked out in designer warm clothes and a fox fur hat with earflaps and a runner in a T-shirt. Too bad Viktoria didn’t let me take pictures. She was stopped twice by the block posts on her way to meet with me. Her documents were checked and questions asked. She worried that both of us having foreign passports and taking pictures in the city center would cause suspicions. The only picture I took was of the sculpture in the park. I feel it symbolizes the mood of the city today. 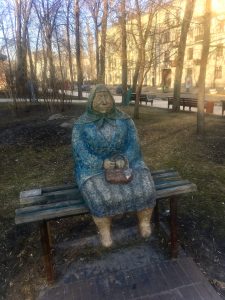 We dig our heels into each moment, each second passing quicker than the last.

My American friend sent me an email which says:
“In times of wars, the goodness reawakens.
These wars are real. We cannot ignore them. We have to fight wars and fight against them.
The greatest enemy of war is peace. We fight with kindness, openness, persistence and compassion.
We honor all beings. And are grateful for our existence.
We bow before Ukrainians. Your war is not ignored and not forgotten.”

I know he speaks for many Americans. It is so touching. I literally cried.

One thought on “Kyiv Diary 3/20/22: ‘Heartbroken Adults Are Forced To Leave the Elderly Behind’”