A MOMENT OF CONNECTION

“Over time, I’ve learned to honor words. To choose them carefully. To consider their journeys and stories. To harness their power….” These are Nadine Epstein’s own words (“From the Editor-in-Chief: Learning to Honor Words,” Summer 2022), and they are sheer poetry. I enjoyed and admired her piece, which served as an introduction to “The Making of a Jewish Word” (Summer 2022), as much as I appreciated the article itself. I thank Moment for continuing to inspire me and your readership with your remarkable literary gifts. Amos Oz once wrote that ours is not a bloodline but a textline. To this I would add: Every text has a context. I recall the power of both from my first arrival in the United States from Tel Aviv in 1954.

I was 13 years old. None of my family yet spoke a word of English, so as the eldest child I was assigned the responsibility of booking a flight for our family, from New York to San Jose, California. To the agent, I proudly identified our destination as “San Joe-see,” knowing neither the English nor Spanish pronunciation. This was met by the agent with confusion, then hilarity, then understanding and recognition. I have never forgotten that moment of connection when word became meaning. It was my first introduction to a new language and a new home. Text is defined by context. What makes a word Jewish? Every word is Jewish when it has a Jewish story to tell.
Uri D. Herscher
Founder, Skirball Cultural Center
Los Angeles, California

I enjoy Moment very much, and the edition on Jewish words was no exception. As a Yiddish-language professional, I would, however, request that you use YIVO standard transliteration when rendering Yiddish (which is written in the Hebrew alphabet) in the Latin alphabet. Please don’t use German spelling for Yiddish words or simply default to the most popular American/English spelling. This does a disservice to the Yiddish language, and reflects poorly on Moment, a publication founded by Yiddish speakers and named after a Yiddish newspaper.

The entry on “mensch” states that it “can also be spelled mentsh—the more correct romanization of the Yiddish” and that mensch (the less correct romanization, again) comes “straight from German, where it means person or human being.” “Straight from German” is also a bit misleading, as the approximately 1,000-year old Yiddish language comes from Middle High German (with Hebrew, Aramaic, Slavic and Romance elements), not from modern German.

As the article points out, words like mentsh take on a different meaning when used outside of their original language and context. There are many nuances, and spelling is just one of them.
Amanda (Miryem-Khaye) Seigel
Brooklyn, New York

In “The Making of a Jewish Word” you cite Moshe Waldoks on the term “Jewish geography” as saying, “It’s been around since the 1970s, perhaps.”

I can confirm that the term has been around at least that long. As a senior at Hofstra University in the mid-1970s I had a humor column in the student newspaper. I wrote one featuring courses that “didn’t make the course catalog.” One was named “Jewish geography.”
Kalman Socolof
Ilion, NY

Your mention of “Jewish geography” in your Jewish Word symposium instantly brought back a memory. I was at a college dance for Rutgers and Douglass students in September 1960, and when I returned to my dorm room, my new friends asked me how it went. I distinctly remember telling them, “I met a cute girl, and after we played Jewish geography for a while, I found out her aunt owns the ‘pink house’ in Deal near the ocean.”
Jim Berg
Egg Harbor Township, NJ

HE IS THE EGG MAN

The excellent article “A New Generation of Jewish Farmers Returns to the Land” (Summer 2022) brings back memories of when I was a child in the late 1940s and 1950s. We lived in Brooklyn with about 100 grandaunts and granduncles, aunts, uncles and cousins living in a ten-block radius. The center of family life was my grandparents’ house with a big side yard where we would gather on Saturdays and Jewish holidays. My mother and her sisters would go there during the week to help prepare for the Shabbat meals, and always the question would be asked: “Did the egg man arrive yet?” There was a weekly delivery of eggs from the Jewish farmer in New Jersey. When I asked my mother why they bought eggs from him instead of the local supermarket, she answered something like, “He’s a landsman, a fellow Jew.”

My wife’s family had a more direct connection to the egg farmers in New Jersey. Her uncle was a doctor in Mays Landing. After the war, he helped settle some of the Jewish refugees in the area around Vineland, and many were egg farmers. These included a cousin and my wife’s family. As a preteen and teenager, her older brother would work on the egg farm, during vacations and summers. By the time I met my wife in 1960, the family had left the egg farm, and within a few years the doctor and his family left rural New Jersey.
Jay Stonehill
Chicago, IL

In a quotation from the piece on Jewish farmers, Jonathan Dekel-Chen points out that the Am Olam movement (the wave of Jewish utopian communal farms in North America in the 1880s) paralleled the Hibbat Zion movement that led to the first agricultural settlements in Palestine.

Both movements were preceded, by almost a century, by the Russian government’s establishment of a handful of Jewish agricultural communities in the Crimean Peninsula. They were led by Nokhem Finkelshteyn of Shklov and populated initially by Jews from Moghilev in Lithuania—a hotbed of traditional Judaism and opposition to Hasidism—who maintained their rigorous Jewish observance on their new farmsteads.

This experiment in “Jewish agriculture” was described around 1806 in the journal Shulamit and treated fictionally by Joseph Perl, a champion of Haskalah (Jewish Enlightenment) in Galicia. It was in no way connected to the land of Israel.

The reimagining of Jewish life represented by the new wave of agricultural experiments in North America may reflect, as Phillips suggests, “the intersection of Jewish values, environmental sustainability and social justice,” but it is about neither national life and culture à la the Hibbat Zion movement nor transferring traditional religious observance to an agricultural setting, as was attempted in the Crimea.
Dov Taylor
Woodstock, Vermont

I found the article by Noah Phillips interesting, but with some important omissions. Anyone writing about Jewish farmers should start with Paths in Utopia (1949) by Martin Buber, because he discusses the utopian socialists and origins of the kibbutz in Israel, which is also important to Jewish communal farming in America. The other significant omission is a complete lack of information about Jewish communal farms in the 1960s and 1970s. Mike Tabor, for instance, started a Jewish communal farm in Pennsylvania [Licking Creek Bend Farm] and has been selling produce from his farm in the Washington, DC area for more than 50 years. He was part of a network of Jewish communes and communal farms for many years.
Tom Rose
Palm Harbor, Florida

ARE WE LOSING OUR DEMOCRACY? 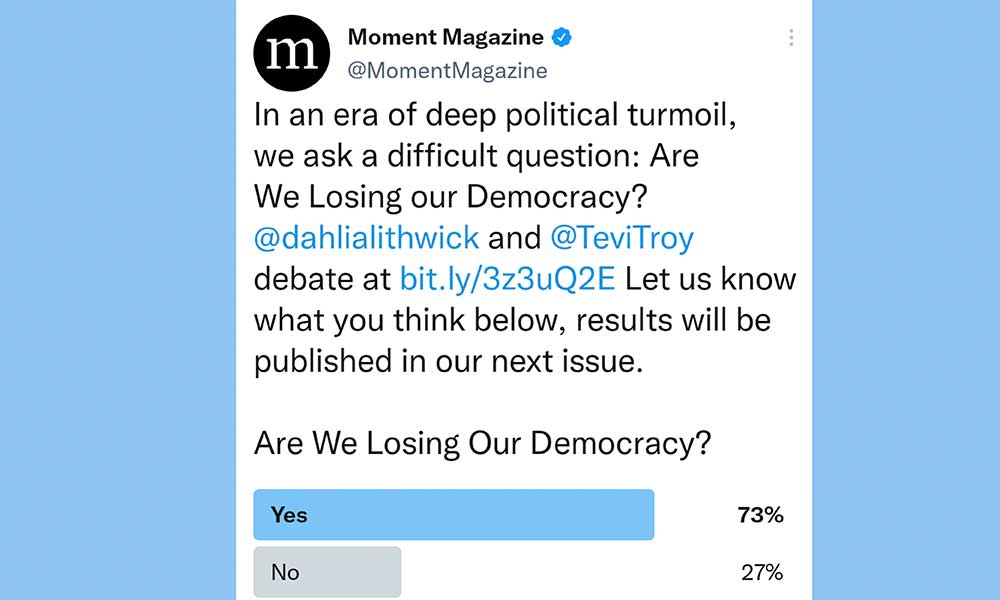 In the previous issue, Moment asked if we are losing our democracy. We asked Moment’s Twitter followers to weigh in. Yes won.

CORPORATIONS OWN US ALL

The question asked in the most recent debate (“Moment Debate: Are We Losing Our Democracy?” Summer 2022) presupposes that we have one. But the reality is that nothing gets through Congress without having a corporate sponsor. The lack of antitrust enforcement has produced powerful oligopolies [when a few companies exert significant control over a given market] in most industries. Most regulatory agencies have been captured by industry. The media that most Americans have access to are sponsored by large domestic and foreign entities. Money in politics keeps a check on anyone set on upsetting the status quo.
Harlan Levinson
Los Angeles, CA

FOR THE LOVE OF LOX

Memories of long lines outside Zabar’s on Saturday night came back while reading Gloria Levitas’s review “The Temple of Whitefish and Lox” (Summer 2022). I also remember The New York Times’ obituary for a longtime Zabar’s counterman who was deemed “the dean of American lox slicers.”
Avrom Jacobs
Jamaica Plain, MA

Thank you so very much for featuring the wisdom of Judea Pearl on your recent MomentLive! Zoominar (“Zionophobia: A Wide Open Conversation”). I was very pleasantly surprised that Moment would have chosen to do this program with him, since I imagine that many of your readers don’t agree with a number of his ideas on Israel.

I appreciate that the interviewer, Editor-in-Chief Nadine Epstein, allowed him to offer his opinions, even though she may not have agreed with everything he said.

I believe that it takes courage to not only feature ideas with which you do not agree but also to be willing to stand up to what may be severe criticism from Moment supporters. I applaud you! Thank you again!
Judy Goldman
Maale Adumim, Israel

To watch this Zoominar go to https://momentmag.com/zoominars/

After working for seven years at a Jewish parenting website, Molly Tolsky wanted to create a space for an audience she herself identified with: young Jewish women focusing on careers and their place in the world who weren’t necessarily thinking about marriage or children.

END_OF_DOCUMENT_TOKEN_TO_BE_REPLACED

Special Edition | The Making of a Jewish Word

Technology inexplicably fails us often enough that we need a word for the occasion.