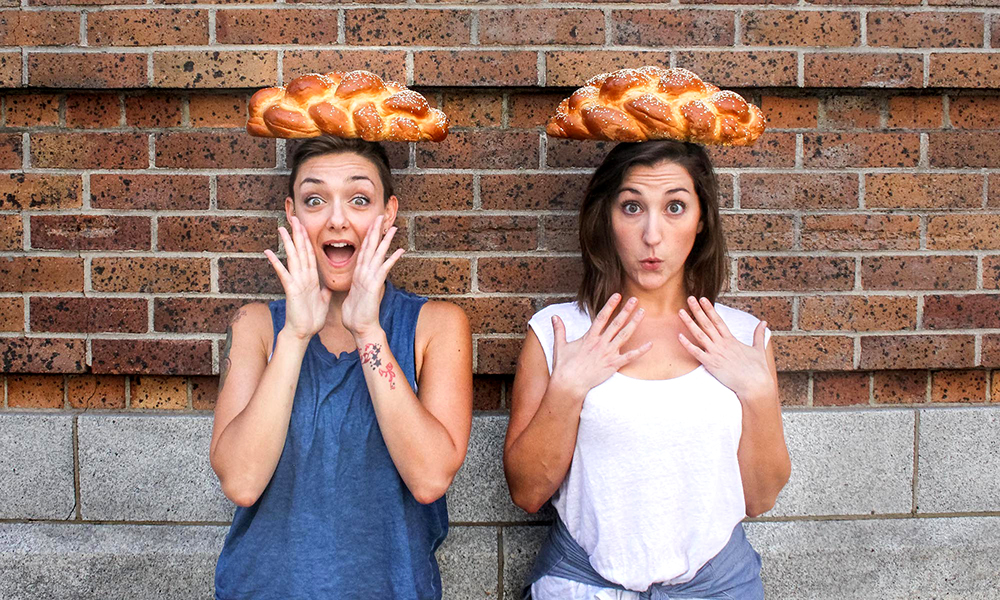 The word “challah” made its first appearance more than 2,500 years ago. Spelled chet-lamed-heh in Hebrew, it appears in several books of the Bible, including Leviticus, which states that 12 loaves—called challot—were to be placed each Shabbat in the desert tabernacle. According to the Mishnah, this practice continued in the time of the Temple, when unleavened challot were baked every Friday by the priests and displayed for a week in the Temple sanctuary before being eaten. But challah, the plump bread served on Shabbat tables, came many centuries later.

In Numbers, “challah” actually refers to “a portion of the dough”—about the size of a large olive—produced in the preparation of bread. After the Israelites entered the Land of Israel, God commanded them to take this portion and give it to the priests, a practice unrelated to the tabernacle. After the destruction of the Second Temple, when one could no longer bring a portion of the dough to the priests, Jews instead burned a small piece of their challah to maintain the holy ritual. But in either case, there was no connection to Shabbat. The same is true of the word’s etymology: The Hebrew root, chet-lamed-lamed, or hallal, means “hollow,” “space” or “pierced.”

So when did the term “challah” become the symbol-laden braided loaf of the Shabbat table? The first known connection appears in the 15th century, when Rabbi Joseph bar Moshe recorded the practice of the leading German sage of that time, Rabbi Israel Isserlein, of welcoming Shabbat with “three fine challot kneaded with eggs, oil, and a little water.” During this time, German and Austrian Jews’ Shabbat loaves copied the braided look from a German bread called berchisbrod or Holle—which sounded a lot like “challah,” according to the late Gil Marks’ Encyclopedia of Jewish Food. In a rite dating back to pre-Christian times, the Germans braided their bread to resemble the matted hair of a Teutonic demon named Holle. The bread was then thrown into the fire to escape the fury of the demon.

Whatever its origins, braided Shabbat challah soon evolved into an expressive art among Ashkenazi Jews. Families invented unique shapes and embellished their challahs with symbolic flourishes, initially, according to Marks, to help them recognize their loaves as they emerged from their towns’ communal ovens. Other symbolic ornamentation, still practiced today, included two challahs with six braids for the Shabbat table, evoking the Temple’s 12 display breads. Adding eggs or saffron suggested the double portion of yellow manna that the Israelites in the desert watched fall from the sky on Friday, enough to last them through the Sabbath. Claudia Roden writes in The Book of Jewish Foods that some Jews sprinkled their challah with poppy or sesame seeds, an allusion to the falling manna. Sephardi Jews typically omitted eggs and sugar, preferring spices, honey, seeds and oil, among other ingredients. And Shabbat loaves made by Middle Eastern Jews took an altogether different approach: They were generally simple and sometimes even flat so they could be dipped into a rich array of stews.

Only in the 17th century did challah become a Shabbat staple for Jews throughout Europe. But what it was called still varied by region: Among German Jews it was berches or barches, while Eastern European Jews used the Yiddish term khale. Lithuanian and Latvian Jews used kitke (which may have meant “weave”), the word South African Jews, many of whom came from Lithuania, would adopt much later.

In the 18th century, challah had become ubiquitous at other holiday meals as well. For the pre-Yom Kippur meal, it was shaped like birds to symbolize sins flying away. For Shavuot, it was shaped like a ladder, recalling Jews’ ascent up Mount Sinai to receive the Torah. For Rosh Hashanah, challah in the shape of a hand signified judgment.

As Yiddish-speaking Jews immigrated to America, challah took on new sets of traditions and cultural associations. The great Yiddish author Sholem Aleichem wove it into the myth of the American dream, imagining America as a paradise “where challah is eaten even on weekdays” in his 1892 poem, Shlof Mayn Kind (“Sleep, My Child”). By the 20th century, Jewish immigrants were putting their own spin on challah’s holiday variations; a non-dairy version filled with raisins or other goodies, for instance, became a Rosh Hashanah staple. For many years, these immigrants still used the Yiddish pronunciation, khale, with a short “eh” ending, says Sarah Bunin Benor, professor of contemporary Jewish studies at the Hebrew Union College. Later generations Americanized the ending as either “ee” (chally) or “uh” (challah). Eventually the “uh” form won out in most Ashkenazi communities.

Today, challah—as a word, an act and a symbol—is a bridge across the generations. It seems there are as many variations on challah as there are people baking it. Challah for Hunger organizes thousands of student volunteers every year at more than 80 college campuses across the country to bake and sell challah to support social justice causes. In Rockland, New York, 500 Jewish women gather annually for the Rockland Mega Challah Bake. Many bakers use challah to express their Judaism. A Vancouver woman, Lisa Spiegel, has been baking challah every week for 20 years in creative shapes, from lobsters to octopuses to camels. No longer just a mitzvah performed for Shabbat, challah is now an event and a form of art.