Hazel Homer-Wambeam will head to the Miss America stage in December.
Culture, Latest

Hazel Homer-Wambeam hails from a small but mighty Jewish community in Laramie, Wyoming. With only 1,150 Jews in the whole Cowboy State and no synagogue in sight, the Jews of Laramie gather in a local Masonic Temple for services, meet for potluck dinners and join in dance and song.

Homer-Wambeam took her deep-rooted love for dancing and singing from Laramie to the talent portion of the Miss Wyoming competition where, in June, she was named the first Jewish crown holder. In December, Homer-Wambeam will head to the national competition to vie to be only the second Jewish Miss America in the program’s history. The first was Bess Myerson, who competed as Miss New York during World War II in 1945.

“I can imagine that Myerson brought on a lot of hope for people, and sadly in the 2020s antisemitism is still prevalent in American culture and across the world,” says Homer-Wombeam, who is a college senior studying musical theater at the University of Wyoming. “And so, for me, looking at Bess Myerson and how she made an impact on the world as the first and, to this day, the only Jewish Miss America, it is very humbling to think that I could have that impact as well as the first Jewish Miss Wyoming.”

Myerson had an impact on the way Jewish people were perceived in the United States. “Her Miss America win transcended mere superficial beauty standards,” Emily Shire, a writer who specializes in covering religion and politics, wrote in the Daily Beast in 2017. “It marked a groundbreaking moment in how the country viewed Jews, especially Jewish women.” 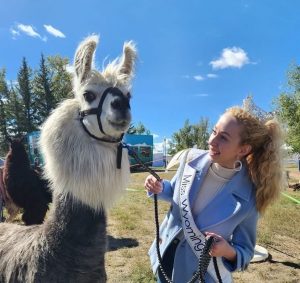 Homer-Wambeam has competed in several scholastic competitions, from National History Day from 2011 to 2018  to Distinguished Young Woman (DYW) of Wyoming in 2019. At DYW, she befriended DYW of Alaska and current Miss America Emma Broyles, the first Korean-American to hold the title.

The Miss America contest is not without critics. The franchise is trying to move away from its “beauty pageant” image; it eliminated the swimsuit portion of the competition in 2018 and now focuses more on public speaking, social issues, communication skills and volunteerism, in an effort to focus on its talent and scholarship portions. The bathing suit contest had existed since the competition’s origin in 1921.

Miss America has also historically lacked diversity in its contestants. The competition did not have its first Black contestant until 1970, and Vanessa Williams was crowned the first Black Miss America in 1984.

Myerson’s 1945 win, though significant for the Jewish community, was met with antisemitism from sponsors who did not want a Jewish Miss America promoting any of their products. In her personal life, Homer-Wambeam has also experienced comments about her “Jewish nose” and curly hair, which she was determined not to straighten for the competition.

“I just really want to be myself onstage and show off my personality, and I feel like my hair is a big part of that,” Homer-Wambeam says.

Miss America’s decreasing superficiality in its competitions and Homer-Wambeam’s experience with comments about her appearance inspired her social-impact initiative, EveryBODY Dance, which encourages people to celebrate their bodies no matter their appearance, she says. All contestants must have a social-impact initiative and Homer-Wambeam’s focuses on body positivity through dance. She teaches dance classes to people of every age, gender, body type and ability.

“I believe that if taught correctly, dance can be a great outlet for understanding the capabilities of our bodies, and then celebrating those capabilities,” Homer-Wambeam says.

Homer-Wambeam considers herself to be culturally Jewish. Her mother is Jewish and her father is not. She does not observe Shabbat nor did she have a Bat Mitzvah, but she grew up attending Hebrew school and celebrating Jewish holidays with her family and Jewish neighbors.

Wendy Berelson, lay cantor in Laramie’s Jewish community and the faculty adviser to UW’s Hillel, has known Homer-Wambeam since she was born. While there are not many Jewish students at UW, Berelson says that Homer-Wambeam, as the organization’s president, has increased the chapter’s social media presence to recruit more members.

Berelson believes Homer-Wambeam’s coronation as Miss Wyoming will expose the hidden diversity of the state. “It’s significant to show the diversity in the state that people maybe don’t recognize and that there are people of many faiths, backgrounds and ethnicities here,” says Berelson.

When Homer-Wambeam returns to school in the spring, after taking a semester off for the competition, she anticipates having an even closer connection to her Jewish roots. “I have this moment in time where I have a large following and people are listening to me because I have a crown on my head,” she says. “I want to take that opportunity to be proud of who I am.”

Traditionally, Miss Wyoming sends out Christmas cards to people within the Miss America organization, but Homer-Wambeam plans to post her Hanukkah celebrations all over social media instead. “It’s my duty to my culture to use that platform to speak up and represent my heritage,” Homer-Wambeam says. 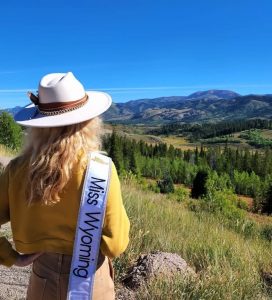 Homer-Wambeam will participate in preliminary rounds of the competition on December 12 and 13 in Connecticut. The Miss America finals will be on December 15.

Health care for all in Mali: A Jewish Call to Action with Drs. Ari Johnson and Jessica Beckerman

To address the child and maternal mortality crisis in Mali, Dr. Ari Johnson and Dr. Jessica Beckerman co-found Muso, a non-profit advancing child and maternal health which has developed a new, proactive model of universal health care in Mali. Today, Muso provides health care to more than 370,000 people and the communities it serves have achieved rates of child mortality lower than that of any country in Sub-Saharan Africa. Johnson and Beckerman join Moment Senior Editor George Johnson, who also happens to be Ari’s dad, for a conversation about the health care crisis in Africa and how the couples’ Jewish commitments have motivated and energized their inspirational work.

END_OF_DOCUMENT_TOKEN_TO_BE_REPLACED

Sharing the Narrative: How Muslims & Jews Can Remember the Holocaust Together

In January, the American Jewish Committee (AJC), in partnership with the Muslim World League (MWL), brought 62 Muslims and 20 Jews from 28 countries together for a two-day interfaith mission in Poland.

END_OF_DOCUMENT_TOKEN_TO_BE_REPLACED

Ask The Rabbis | How Has Pittsburgh Changed Jewish Life for Your Community?

Our reaction to the events in Pittsburgh began with mourning for the victims. From mourning we moved to the legitimate fear that comes from living in a nation where easily procured weapons of mass death terrorize people of color, Muslims, LGBTQ people and—as always—Jews.

END_OF_DOCUMENT_TOKEN_TO_BE_REPLACED

The Weird and Wondrous World of Jews and Magic

Facebook Twitter Pinterest linkedin Telegram
The first time I came face-to-face with Jewish magic was when I moved to Israel in my early 20s. It was the fall of 1995 and Jerusalem ...