James Frey's Messiah of the Subways 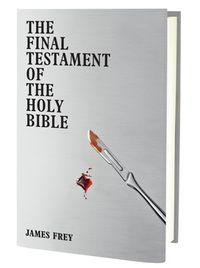 today? James Frey takes a stab at answering this question in his new book, The Final Testament of the Holy Bible. After revealing that his 2003 memoir, A Million Little Pieces was mostly fictive, Frey was swiftly ostracized by the literary community and, famously, by Oprah Winfrey, who had previously championed him. In a brave attempt to redeem himself, Frey has written an addendum to the most famous book of all time, revealing the second coming of the Messiah—this time, in the Bronx projects.

Pulling out all the controversial stops, Frey’s Christ character, Ben Zion Avrohom, also known as Ben Jones, is a former alcoholic who impregnates a prostitute, smokes pot, and engages in homosexual relations. After surviving a horrific work accident, Ben suffers from epileptic attacks in which he converses with God and gradually develops a band of devout followers who fearfully build a shelter in the Manhattan subway tunnels. Ben Zion preaches that the 2,000-year-old Bible is antiquated and that “stories that had meaning then are meaningless now…those books are dead.”

Having been dumped by his publisher after the Oprah snafu, Frey is taking precautions this time around, publishing only 11,000 copies in the United States and self-publishing e-books online. And just in case we didn’t understand that he was making a statement in the face of religion, the book was released on April 22: Good Friday. Frey is prepared to take criticism, saying, “I’m sure the religious right will go crazy because the story of Ben…is hardly the Messiah they have in mind. But I don’t really care. I just did what I always do — tried to write the best book I could.” However, with all of the controversy brewing before the book was even released, Frey must have anticipated that any hopes of praise for good writing would be overshadowed by passionate religious dialectic.

John Murray, Frey’s publisher in the UK, is using a “word of mouth,” or more specifically, a “word of YouTube” strategy to inspire an audience of readers. In one video, Frey expresses in a monotonous discourse: “I believe the first two volumes of the Holy Bible were written by people like me, storytellers, who wanted to create some piece of work that made sense of the world they lived in…I believe these books should never be considered pure fact or literal truth, but works of art.” Frey is quick to attack organized religion through the doctrines of Ben Zion, speculated to be Frey’s alger-ego. Ben Zion defines the institution as “a beautiful con, the longest running fraud in human history.” It is true that the scribes of the Bible could not have imagined the world we live in today, rife with nuclear power, cyberspace, advanced physics, and social reformations. But the power of the Bible lies in its ability to transcend generations and encapsulate values that speak to each human.

The UK’s Channel 4 released a review saying that for those who can get past the offensiveness, “It’s a sensitive and very moving exploration of the human need for love.” One of Ben Zion’s converts says, “God is what you feel when there’s love in your heart,” which may be the closest Frey gets to adhering with the messages of the Hebrew Bible and Yahweh’s notion of steadfast love. But if Frey is looking to stimulate acts of kindness, he may be going about it the wrong way by writing a book that invites readers to “Be enraged.” And if he is looking for redemption, as does his Christ character that is martyred by the media, he may only be placing himself on a higher pedestal. The Guardian wrote a scathing review, saying that Frey is “less of a writer than a professional celebrity, which means that he can count on being rewarded for behaving badly.” Considering the millions of devout followers garnered by Twittering celebrities, no matter how outrageous they may be, that claim may hold some truth.

Regardless of whether Frey finds success with this radical book, he certainly has chutzpah for writing something that he believes to straddle the line between religious text and fiction. If anything, he will create a dialogue by asking how much power we give to the fictive word and how much to the religious. Is there a fine line? Slapping the adjective “Final” before “Testament” not only presents Frey’s book as an addition to holy texts but also as a conclusive one. Frey nullifies all further attempts at creating pseudo “testaments”—that is, if you take his word as truth. Rather than prejudging a text that can be seen as folly, treason, or literary genius, the author first invites us to judge for ourselves. Stepping into the shoes of a modern religious scribe, Frey asserts that his goal was to “create a mythology, to tell a story, to make a work of art…whether I was able to do it or not will be determined by readers, and by time, and by history.”

Unearthing the Truth of Tall el-Hammam

A recent scientific paper presents new evidence for a real-life inspiration for the biblical tale of the destruction of Sodom and Gomorrah.

END_OF_DOCUMENT_TOKEN_TO_BE_REPLACED

Few literary figures have stirred readers’ imaginations as much as Kafka, his tormented life and early death. Indeed, he is viewed as a mythical figure as much as a renowned author. But above all, the bizarre story of how Kafka’s work survived and entered the canon has become a staple of literary legend.

END_OF_DOCUMENT_TOKEN_TO_BE_REPLACED

Welcome to Our Summer Books Issue

When I was in second grade my mother told me to read upside down. “You’re reading too fast,” she said, “it’s upsetting the teacher.” She had been instructed to do this as a child, and it was only natural for her to pass this wisdom on to me. Even now, I occasionally flip the book over in order to savor the story.

END_OF_DOCUMENT_TOKEN_TO_BE_REPLACED

Facebook Twitter Pinterest linkedin Telegram
Got some leisurely reading time on your hands this Hanukkah season? We've got you covered. As the year winds to a close, we asked our e...

END_OF_DOCUMENT_TOKEN_TO_BE_REPLACED

Facebook Twitter Pinterest linkedin Telegram
Each week, we'll take a look at what Moment editors are reading, from newspapers to novels. This week we hear from Eileen Lavine, a sen...

END_OF_DOCUMENT_TOKEN_TO_BE_REPLACED

A Brief Literary Guide to the History of Gaza

Facebook Twitter Pinterest linkedin Telegram
There's more to the long-suffering region than meets the eye. From visual journalism to history to cookbooks, here are four books to de...

END_OF_DOCUMENT_TOKEN_TO_BE_REPLACED

Facebook Twitter Pinterest linkedin Telegram
by Darren Pinsker When the Israeli writer Haim Hazaz died in 1973, his reputation was so lofty in the world of modern Hebrew letters t...

END_OF_DOCUMENT_TOKEN_TO_BE_REPLACED

One thought on “James Frey's Messiah of the Subways”