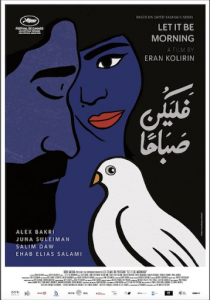 Let It Be Morning

That Let It Be Morning is the opening night movie on November 4 at the Marlene Meyerson JCC Manhattan’s Other Israel Film Festival is an indication of the esteem in which it is held. The film’s high profile is due to its director, Eran Kolirin (The Band’s Visit, The Exchange, Beyond the Mountains and Hills), as well as the fact that it is Israel’s official submission to next year’s 94th Academy Awards, in the “Best International Feature Film” category.

Based on the novel by Palestinian writer Sayed Kashua, the story revolves around Sami (Alex Bakri), an Israeli Arab living comfortably in Jerusalem and working as a manager in the telecoms industry, who returns to his remote village with his wife, Mira (Juna Suleiman), and young son to attend his brother’s wedding. He is a troubled soul, with less than happy relations with his various family members, and makes furtive phone calls all through the celebrations.

In one of several tragi-comic scenes, just before the fireworks are lit at the close of the wedding party, the door on a cage of doves is thrown open and the birds are encouraged to fly away. But, rather than grasp their freedom, the doves stay stubbornly on terra firma—a metaphor, perhaps, for the lack of movement in the villagers’ lives and fortunes, or maybe even for the stalemate in solving Middle East tensions.

But when Sami embarks on the post-wedding return trip to Jerusalem, he is confronted with hurdles far more onerous than getting reluctant doves to take to the air. He finds that, for no apparent reason, the army has mounted a roadblock and put up a wall, effectively shutting off all exits from the village. Though he is an Israeli citizen, not only is he refused permission to continue his journey to Jerusalem, he is also given no explanation for what is going on. The situation becomes desperate as he realizes that his job could be in jeopardy if he can’t get back to work the following day, when he is expected to give a presentation.

Trapped in his birthplace, Sami is witness to the slow disintegration of his personal sense of identity, family relations and the wider society around him. Myriad indignities are inflicted on the local Palestinians while they are sealed off from Israel. Cell phone signals become unavailable, the electricity supply is cut, water runs out and stores are emptied of everyday products. There are no potatoes, and canned goods are fought over—though, incongruously, battery-operated Christmas lights can be purchased. In the middle of this suffocating lockdown, tensions rise rapidly. Local bully Ashraf terrorizes Sami’s childhood friend Abed. There are petty squabbles, brute force is used to secure scarce food supplies and all the while the villagers seem stuck in an interminably precarious situation.

Dishearteningly, there is intra-Palestinian discrimination as well. Two West Bank workers, illegally employed on a construction project for Sami’s father, are exploited as cheap labor and poorly treated.

In this quagmire, rumors inevitably emerge about why the army has imposed such restrictions. Abed says he has heard that America is about to attack Iran, and so Israel has locked down its Arab citizens, as they view them as a “fifth column.” The true reason for the army’s presence is much more prosaic (spoiler alert).

The crushing nature of everyday life has slowly and inexorably led to a cowed and submissive population. Yet the lockdown prompts a few to find the inner strength and resolve to rebel—though unity eludes them. During a protest, locals find themselves pitched against one another, with one group waving banners and shouting: “Collaborators with the occupation are a disgrace!” When Abed suggests a march to the checkpoint, Sami retorts: “But in this village, we can’t get two people together for backgammon.”

This is a haunting film, with several beautiful nighttime candlelit scenes evoking the claustrophobic conditions in which Sami finds himself. The director, Kolirin, depicts how people are trapped—in loveless marriages, unfulfilling work and insoluble political and communal predicaments, unable to break free because of  conflicting allegiances and identities.

A surprising end scene offers some small measure of hope, yet the ultimate message is how deeply impenetrable the issues are that need to be resolved before lasting harmony and cooperation between Israeli Jews, Arab citizens of Israel, and West Bank Palestinians can be achieved. Many post-screening discussions will likely arise around the multilayered questions this film raises.