I have a personal interest in the carved Japanese netsuke, or figurines, that are at the center of the New York Jewish Museum’s current show “The Hare with Amber Eyes,” on view through May 15. My father, who was a naval officer during World War II, brought back a number of carved wood figures after his deployment in the Pacific. One of them, a netsuke of a recumbent horse about two inches long, seemed especially soulful to me. When I was a child, I would hold the compact creature in my hand and imagine it could tell me something about a part of my father’s life that he didn’t talk about. And when I animated the little horse in play, it served as a link to a faraway place and an unfamiliar culture.

Netsuke are miniature, skillfully rendered Japanese figures, and they have always been part of a material culture of intimacy. Starting around the 17th century in Japan, they served as useful objects for daily dress, like rings or fasteners. Tucked at the top of a kimono sash, they functioned as toggles through which a cord was passed to secure suspended pouches or boxes that held personal belongings such as smoking supplies or medicines. Later, carved out of ivory, wood or bone, or sometimes constructed from bamboo or bronze, they were prized as decorative ornaments representing mythological, exotic or legendary figures, venerated plants or animals of the East Asian zodiac.

When trade was opened to Europe, vast quantities of these fanciful, tactile, sometimes grotesque or erotic objects were exported. But Westerners thought of them primarily as artful trinkets, not understanding their cultural and mythological underpinnings. As part of the craze for Japanese art and design in the late 19th century known as Japonisme, netsuke were collected and displayed at salons and in luxurious drawing rooms belonging to aristocrats or stylish newcomers to society, such as the wealthy Jews transplanted from Russia or Constantinople. Because the netsuke were small and portable, they easily changed hands, and the way they were exchanged, in certain cases, has come to say something about a particular strand of the Jewish diaspora. 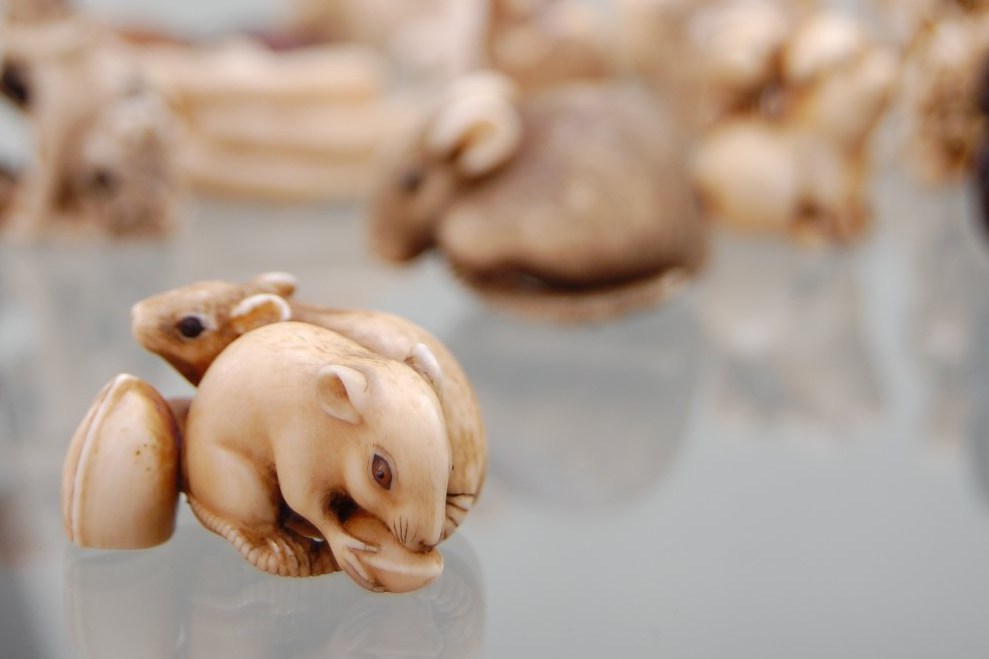 Edmund de Waal, the ceramic artist and author of the best-selling book that gives the exhibition its title, puts it this way: “How objects are handed on is all about storytelling. I am giving you this because I love you. Or because it was given to me. Because I bought it somewhere special. Because you will care for it. Because it will complicate your life. Because it will make someone else envious.” The intimacy that de Waal is getting at resonates throughout the exhibition, which includes family photographs, books, documents, diaries, letters, paintings, chairs and temple furnishings, as well as 168 of the 264 Japanese netsuke purchased as a set by his great-grandfather’s cousin during the Belle Époque in Paris and later passed on to other members of his family, the once famous and fabulously wealthy Jewish Ephrussis. The Ephrussis, with a cadre of other Jewish families, dominated the banking world in Paris and Vienna from the middle of the 19th century until the Nazi period.

When the show originated at the Jewish Museum in Vienna, it was called “The Ephrussis: Travel in Time,” and it focused on the ascension and history of the family, which established its dynastic wealth as grain distributors and then bankers in Odessa, with branches in Paris and Vienna. In 1882, because of ongoing persecution of the Jews, the family closed down their Russian enterprise and concentrated their energies in Europe, where they contributed to their adopted countries through finance, art and philanthropy before the devastation of the Holocaust. 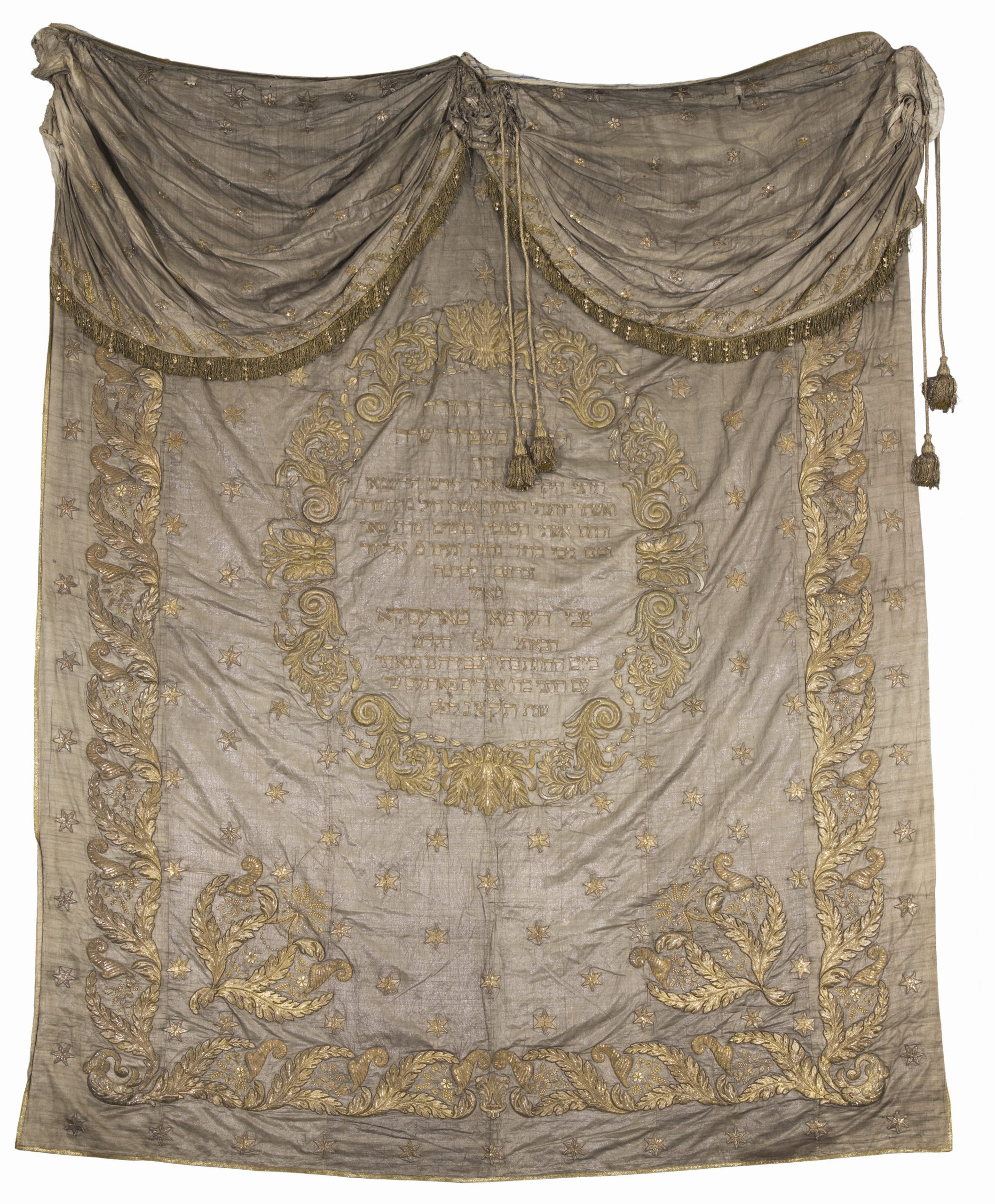 Several objects from the Vienna Jewish Museum’s permanent collection were connected to the Ephrussi family before the war, and these add a poignancy to the exhibition. For example, an outstanding silk-damask, metal thread and cotton parochet (Torah shrine curtain), once donated to the Stadttempel in Vienna by Hermann Todesco, a Vienna Ephrussi relative, miraculously outlasted the wreckage of the Jewish community. It had been the tradition to fashion a Torah curtain from a bridal gown, and the double life of this particular enormous, filigreed and gossamer piece of surviving fabric, once the wedding dress of Anna Nina Todesco Porges, is heart-rending.

In New York, the exhibition has been subtly retranslated through the collaboration of Edmund de Waal with the Jewish Museum and the architectural design firm Diller Scofidio + Renfo. Using tabletops and fabricated dark-paneled library cases for display, the curators have spread Ephrussi materials through the second floor of the museum’s Gothic-styled mansion, once the residence of the New York Warburg family. The grand but homely quality of the show draws attention to the similarities and differences—of scale, of grandeur and of historical fate—between the Jewish barons of the European diaspora, who lived in palaces, and their counterparts in the American Gilded Age.

The exhibition first concentrates on the French branch of the Ephrussi family, since it was Charles Ephrussi, the art critic and historian, collector and chicly dressed flaneur (and one of the models for Marcel Proust’s fictional Charles Swann) who originally acquired the complete collection of netsuke from Sichels in Paris in the 1870s, when the craze for Japanese goods was at its height. The installation includes masterpiece paintings, books, domestic objects and archival materials that once belonged to the splendid Hôtel Ephrussi in the neighborhood of Paris’s Parc Monceau, where the Ephrussis were neighbors of the powerful and wealthy Jewish Camandos, Cahan d’Anvers, Rothschilds and Reinach brothers. 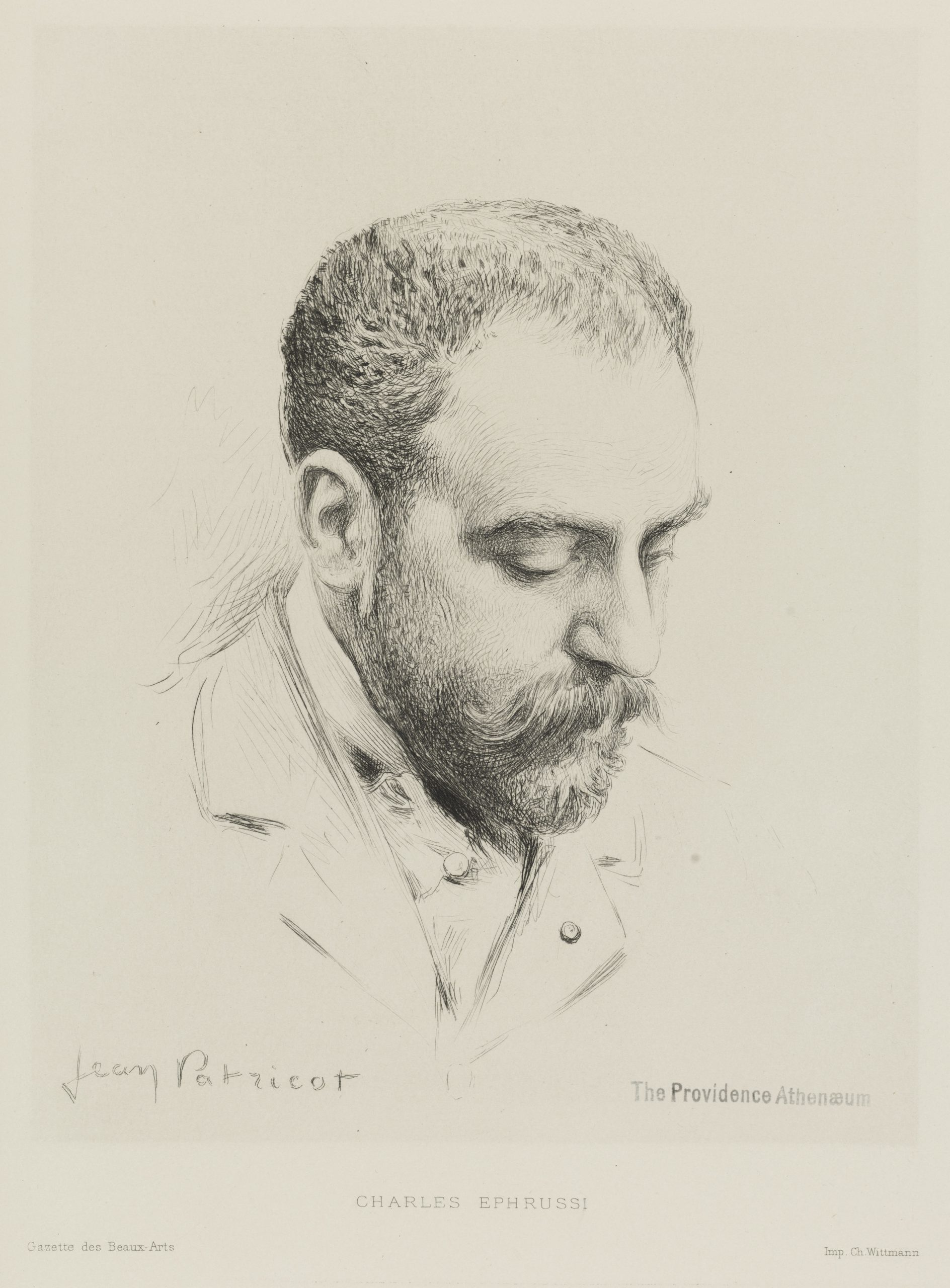 In the exhibition, French artist Jean-Honoré Fragonard’s jubilant and frothy painting Aurora Triumphing over Night hangs in its rococo frame, suspended above a display that includes French artist Jean Patricot’s contemplative portrait of Charles Ephrussi, a fine edition of Charles’s scholarship (his landmark book on Durer), a carved and gilded beechwood side chair (on loan from the Metropolitan Museum of Art) and a porcelain Sevres figure, La Bagneuse, (dated 1758-1766, and also belonging to the Met). On the opposite wall you see more of Charles’s famous art collection, including Berthe Morisot’s paragon of Impressionism, Young Woman in a Ball Gown, and Gustave Moreau’s bejeweled, symbolist Jason and Medea, which Renoir despised, calling it “art for Jews.” De Waal has surmised that Charles and his lover, Louise Cahan d’Anvers, two “neo-Japonistes,” collected the exotic netsuke together, and he imagines how they might have found the dealer’s back rooms a convenient setting for their trysts.

The next part of the exhibition brings together a trove of materials from the enormous Palais Ephrussi in Vienna, where Charles sent the collection of netsuke as a wedding gift in 1899 to his cousin Viktor Ephrussi and his bride, Emmy Schey von Koromia—Edmund de Waal’s great-grandfather and great-grandmother. According to family legend, they situated the black lacquer cabinet with the 264 netsuke in the intimate and domestic space of Emmy’s dressing room, where their four little children would soon come to play with the fanciful figures. The exhibition also includes items such as the silver and amethyst seal with the Ephrussi monogram, which attests to the family’s high standing in Austrian society, and a set of Japanese-inspired painted leaf, ivory, mother-of-pearl, silver and gilt metal fans that give you a sense of the artistry and beauty of Emmy’s wardrobe. Watercolor sketches by the German painter Christian Griepenkerl depict the Denunciation of Haman and the Crowning of Esther, scenes for murals that decorated the ceiling of the Ephrussi ballroom and reflected the family’s sense of pride and perhaps defiance in the gilded world of Vienna, where Jewish aristocracy had sinister enemies. 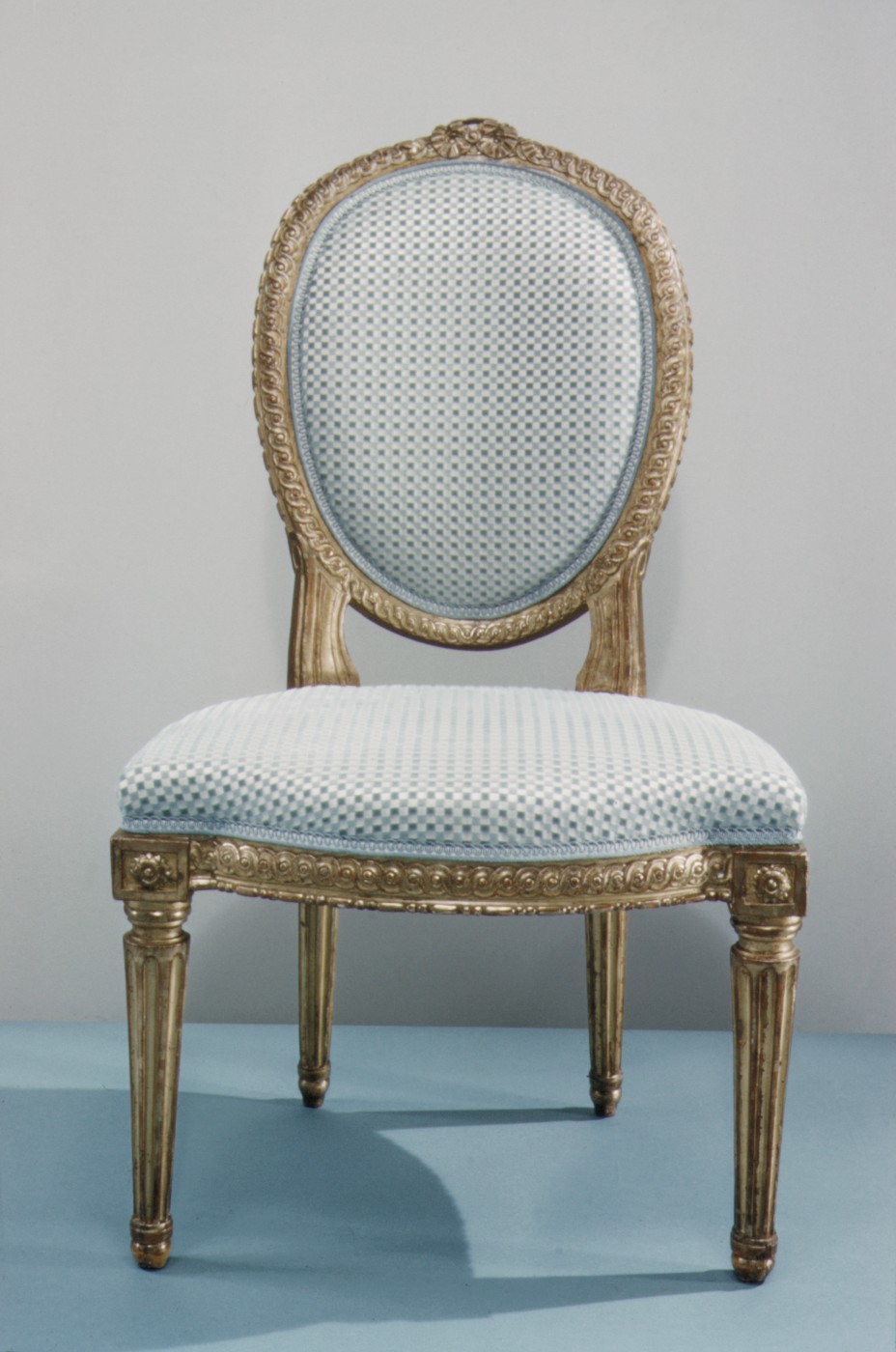 Documents from the Nazi period tell the story of the de-ascension of the Ephrussi family. These include the gold pocket watch given to Viktor Ephrussi in 1938, when he was compelled to retire and the Ephrussi businesses were Aryanized, as well as the first page of the nine-page Gestapo inventory of the Ephrussi household items. As the exhibition wall text points out, many of these official papers have been used for the family’s ongoing attempts to recover what was stolen from them when the Nazis plundered their home.

At the exhibition’s opening in New York, de Waal spoke with modesty about how his family was dispersed due to the calamity of war, his great-grandmother committing suicide at their family house in Kövecses, Czechoslovakia, his great-grandfather dying stateless in London: “I come from a family of refugees,” he said, “but our experience isn’t unique, it’s a human experience.”

The remaining portion of the show includes photographs, letters and memorabilia, much of it collected from Emmy and Viktor’s children and grandchildren, who were scattered around the world, in England, Spain, Mexico, the United States and Japan. A battered leather attaché case that belonged to Elizabeth de Waal, the author’s grandmother, stands as a symbol of the family’s challenging travels. 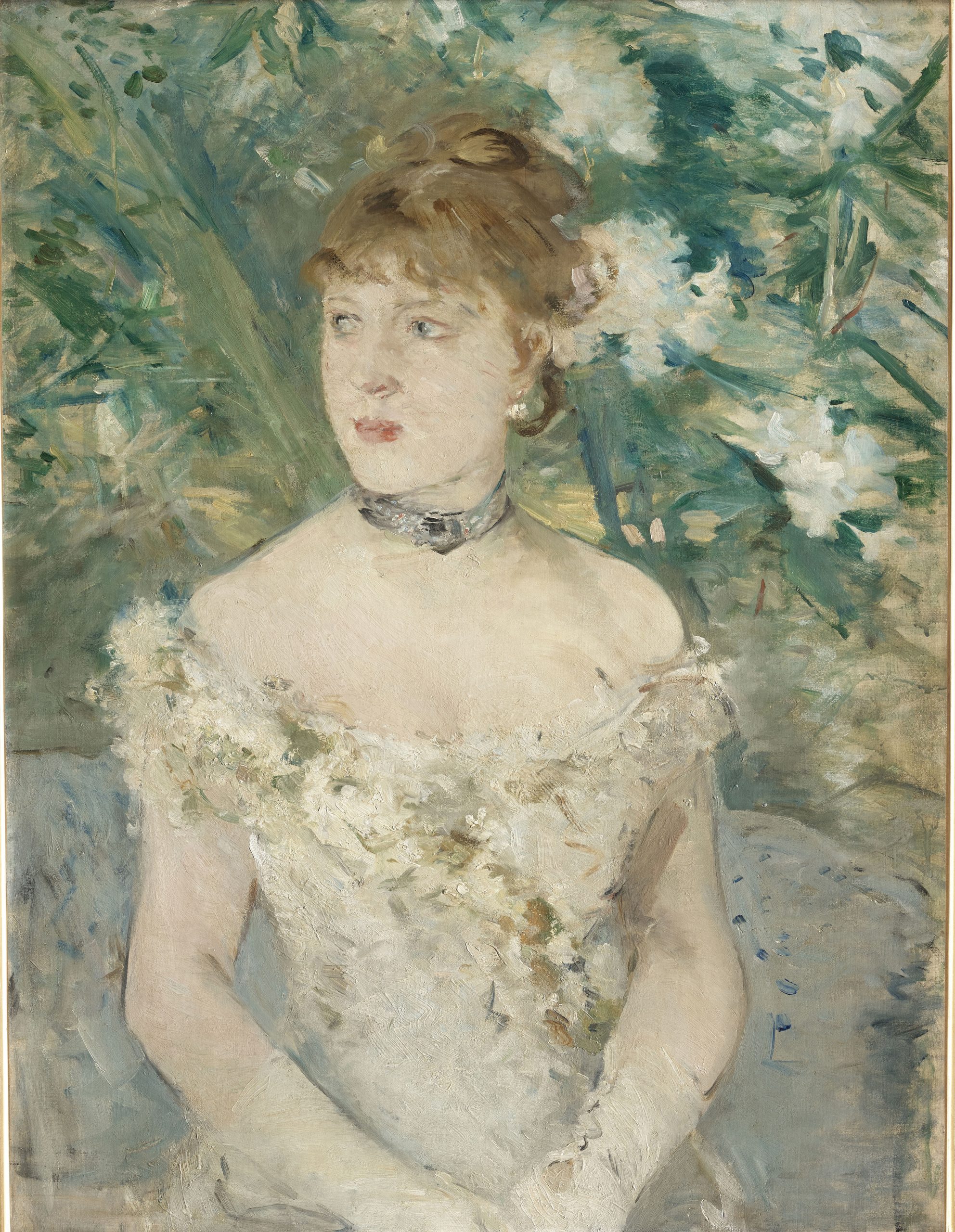 The suitcase is, in fact, a marvelously complex object. On the one hand, it is an emblem, demonstrating how objects tell stories that help us retrieve ourselves as we’re transformed over time. On the other hand, it’s a reminder that stories, like objects, undergo decomposition and deconstruction. The book The Hare with Amber Eyes was written because a Ephrussi family legend chronicled how the collection of netsuke survived the war in Vienna and ended up in Japan. According to the story, a courageous and thoughtful servant named Anna, remembering how the Ephrussi children had played with the carved figures in their mother’s dressing room, carried them, one by one, each piece in her apron, and hid them under her mattress. As a consequence, Anna was able to retrieve them and give them to Elizabeth de Waal when she returned to the family home after the war. Elizabeth then packed them in the suitcase, bringing them to England where she gave the collection to her brother Ignaz (Iggie) as a gift. But in the exhibition catalogue essay titled “Aryanization and dispersion of family assets by the Nazi State,” you will read that there’s no proof that Anna existed, and that Holocaust-era documentation, as well as a firsthand witness account, indicate that the collection of netsuke was authorized in 1950 to be shipped directly from Vienna to Iggie in Japan without Elizabeth as an intermediary. No one knows where the netsuke were stored during the war years or who handed them over to post-war authorities.

Does it matter if they never traveled to England in Elizabeth de Waal’s scuffed-up suitcase? For me, it makes no difference. The point is that the objects have stimulated the imagination of de Waal, his audience, and those of us who have gone to the show to see a book translated into a museum exhibition. What is the relationship between objects and human experience, which is ephemeral and transient? This is the question at the core of The Hare with Amber Eyes. And the answer seems to be that objects can be metaphors and witnesses as well as cargo of the imagination.