Getting It All Out in the Open 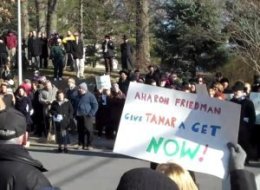 Rally in support of Tamar Epstein

Jewish husbands, we think, are educated and upstanding, family men who treat their wives with warmth, kindness and respect. Domestic abuse? Not in our backyard.

We need only look to recent news coverage to see that it is in our backyard: For approximately four years, Aharon Friedman, a Congressional staffer living in the Washington, DC area, has been refusing to grant his wife Tamar Epstein a get, or a Jewish decree of divorce. According to Jewish law, the husband must initiate divorce proceedings, a generally unproblematic technicality. Sometimes, though, a husband may refuse, as Friedman has. As a result, Epstein is an agunah, or a “chained woman” under Jewish law, unable to remarry or move forward in her emotional or romantic life. Despite the completion of their civil divorce, as well as widespread condemnation of his behavior, Friedman refuses to relinquish control over her life by consenting to a religiously valid divorce. Prominent Washington-area rabbi Shmuel Herzfeld describes this behavior as emotional abuse that is “no less a form of spousal abuse than striking one’s wife.”

Unfortunately, Friedman’s abusive behavior is not the only issue at hand. We are also faced with the fact that in Judaism, there exists a mindset that preserving tradition in the form of “a nearly thousand-year-old ruling is more important than offering women equality within the religion.” As Dvora Meyers writes in The Forward, we see a husband “brandishing a psychological weapon and threatening his wife with it” because current Jewish law allows for it, and rabbis lack the “judicial courage” to implement “halachic proposals that would enable a rabbinic court to dissolve marriage contract even without the husband’s consent.” The law actually facilitates the continuation of abuse, in the form of emotional control.

This story sheds light on what has always been a fairly unspoken issue—as I mentioned, no one really considers abuse to be a Jewish problem. In fact, though, Jewish homes face the same rate of abuse as the rest of the community—it occurs in 15% of Jewish families, across the religious and socio-economic spectrum. Abuse includes a wide range of action, all of which tend to center on control of the other partner. This may mean physical abuse, such as any kind of attack or beating, or sexual, which entails forcing oneself sexually on the other partner and demanding sexual acts that violate the partner’s wants. But, as we see in the case of Aharon Friedman, it also crosses into the realm of the less tangible, the use of intimidation, manipulation, criticism and humiliation that characterize emotional forms of abuse. Economic abuse entails keeping tight control of someone by monitoring their finances and withholding their money and choice in order to determine what they can and cannot do. These types of abuse may exist independently or in conjunction with one another.

So, if abuse is just as widespread as issue within the Jewish community as in the general population, and perhaps even justified by certain Jewish laws, we must consider why most people are so oblivious to it. Though our rate stands no higher than that in the rest of the population, Jewish women tend to stay in abusive relationships for two to three times longer than women in the general population. It seems likely, then, that there are cultural factors in Judaism that contribute to the fatal silence that surrounds abuse in Jewish homes. On the most basic level, observant women may hesitate to leave their home for logistical or financial reasons—many observant women depend on their husband for an income. And in pursuing a divorce, what if she finds herself “chained,” an agunah like Tamar Epstein?

Beyond that, however, it seems that there is a stigma surrounding abuse of Jewish women, creating shanda, or shame, regarding being the victim of abuse. Women may be hesitant to come forward because they believe “Jews are not supposed to be victims of abuse” and fear being ostracized in the community, or simply not believed. Abuse has hardly come up in Jewish forums, so our culture has failed to send the message that women should feel comfortable coming forward and being honest. In fact, Shalom Bayit, one of the few mitzvot dedicated to women, sends quite the opposite message. Shalon Bayit refers to Peace in the Home, the Jewish woman’s “pride and joy” according to tradition. This expectation that a woman create the ideal home to family, education, and love may prevent a woman from seeing it as socially acceptable to “shatter” that image by being honest about an abusive situation.

Some in the Jewish community are fighting domestic abuse. The public outcry over Friedman’s treatment of his wife—including efforts to pressure his boss, Congressman Dave Camp of Michigan, to intervene—proves that the issue is coming to the fore. And the Jewish Coalition Against Domestic Abuse, based outside of Washington, DC, works to eliminate the issue’s shroud of secrecy. It is our duty to look beyond what is easiest to believe and find the truth. Friedman and Epstein’s case demonstrates the absolute necessity of this kind of critical thinking. And once we see that the tragic truth stems in part from our own cultural creation, we can move towards bringing about a norm of justice, and true Shalom Bayit that is far more worthwhile than the illusion currently masking the need for meaningful cultural change.

7 thoughts on “Getting It All Out in the Open”