For Our Iowa Voters–Calm, Order and Few Hints of the Chaos to Come

Home / 000 JPVP / *Ongoing Findings / For Our Iowa Voters–Calm, Order and Few Hints of the Chaos to Come 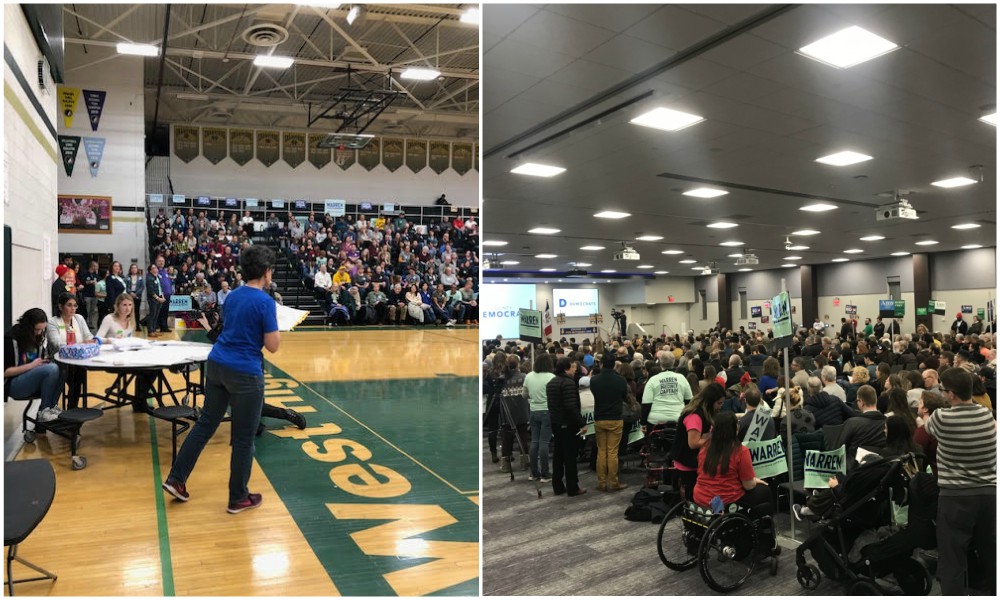 For Our Iowa Voters–Calm, Order and Few Hints of the Chaos to Come

Following last week’s Iowa caucuses, we spoke with the two Democratic Iowa voters participating in Moment’s Jewish Political Voices Project about their experiences. Janice Weiner, who supports Senator Amy Klobuchar, led her Iowa City caucus, which attracted 525 people. Josh Mandelbaum, whose Des Moines caucus drew 512 people, was a “persuader” for  Senator Elizabeth Warren, responsible for convincing undecided voters or those whose first choice did not reach the 15 percent viability threshold, to support her candidacy. From their on-the-ground perspective, the Iowa caucuses were smooth, transparent and overwhelmingly positive. They saw few hints of the chaos to come as the Iowa Democratic Party struggled to tally the results and former South Bend, Indiana mayor Pete Buttigieg and Senator Bernie Sanders each claimed victory.

Josh: My experience was not vastly different from 2016, though it ran smoother than four years ago. This year you could pre-register for the caucus which saved time. There was also a separate line for folks who needed to register to vote, either because they were new to the area or they were Republicans who were registering as Democrats. While in 2016 it took close to an hour to get started, this time everyone was checked in by 7:15 pm.

Janice: The caucus was pretty chaotic in 2016. The sites were not big enough and there wasn’t much training or organization four years ago. This time we were really prepared. I was a first-time caucus chair and had a fair amount of training. The sign-in went smoothly, we had a decent sound system and we did not have all sorts of chaos like last time.

How would you describe the atmosphere at your caucus?

Josh: It was very orderly. Before the event started, each campaign marked areas where their supporters would congregate. When people entered the room, they sat down in the area for the candidate they were going to align with during the first round. People were excited. I was a little anxious from the anticipation of how it was all going to turn out. I was pretty invested in Elizabeth Warren. Elections have significant consequences, and I care about the outcome. I was also anxious because I was going to briefly speak in front of that group.

Janice: It was calm in the beginning when we were doing introductions and giving instructions. I started off saying that caucuses originally began with folks meeting in people’s living rooms. So, I said, ‘welcome to your new living room. This is a chance to get to meet some of your 525 neighbors!’ Then representatives of the candidates gave brief speeches of a minute or less. After the first round, there was some controlled chaos as people began to move around if their first choice was no longer viable. But for the most part, it went smoothly.

After the first round, was your candidate still viable?

Josh: Yes, Elizabeth Warren was one of three candidates that were still viable in my precinct. Bernie Sanders had the most caucus-goers, Warren was second with 130 people, followed by Pete Buttigieg. Joe Biden, Andrew Yang and Amy Klobuchar each had close to a couple of dozen supporters or more, but in the end, they were not viable. There were just a couple of people for Tom Steyer and Mike Bloomberg; Cory Booker had one person and a few people were still uncommitted, so there were a decent number of folks who had to realign their support for the second round of caucusing.

Janice: Yes. After our first round, we had three viable candidates—Amy Klobuchar, Elizabeth Warren and Pete Buttigieg. Warren had the most people, Buttigieg the second most people, and Klobuchar the third most people. However, all were viable by good margins. All gained people in the second alignment. In addition, the Sanders group, which was was just one person short in the first alignment, gained enough people to be viable after the second (and final) alignment. The way the caucus math worked, Warren and Buttigieg each got 3 delegates and Klobuchar and Sanders each got 2.

How did you go about convincing people to support your candidate?

Josh: A handful of us went to speak with voters to try and persuade them to support Warren. There were some folks who were receptive and open to discussing other candidates, while there were others who knew who they were supporting, and you weren’t going to persuade them no matter what.  Although, there was a guy I knew who said that there was no way he was switching over to Warren, so I moved on. When I went back to the Warren area, he actually came over and made her his second choice. So you never know the impact you might have on someone when you talk to them, particularly if you know them and they trust you; that’s the most powerful way to persuade folks and make the case for a candidate. This is what the caucuses are about.

Janice: That wasn’t my role. My only role was to run the caucus. I was just operating as someone from the County party, not as someone trying to persuade others. Though my own vote was recorded. Every candidate had their own precinct captain to speak persuasively to those in groups that were not viable. The precinct captains were trained by their campaigns to try and persuade people to join their group. People either realigned or they opted not to realign and left the caucus.

So how did the second round of caucusing play out?

Josh: I think if Biden and Klobuchar folks had united into one group and pulled in some Yang supporters their group would have been viable, but they couldn’t manage to do it. The Biden supporters were insistent that the Klobuchar supporters come to them, even though Biden had fewer people. The Klobuchar supporters weren’t willing to do that. They had more people than Biden and I think more of them preferred to go with Mayor Pete. Ultimately, most of Biden and Klobuchar’s supporters aligned with Buttigieg in the second round, which moved him into first place. It was close though; there were only nine caucus-goers separating first from third-place candidates.

Janice: In the end, Klobuchar, Warren and Buttigieg all gained some people. In addition, Sanders, who had not been viable after the first round, barely gained enough people to become viable again after the second alignment. In the end, we had four viable candidates.

Was there any indication while you were caucusing that there was a problem with the reporting of the results at your location?

Josh: No, we didn’t have a clue that there was a problem until we got home and started watching the results. In fact, this year each person had a preference card, so there’s a paper trail, which we didn’t have in previous caucuses. The folks who aligned with a viable candidate in the first round only had one preference written on the front of their cards. The people who had to move to a second choice had their preference written on the other side of their card. Using these cards, candidate leaders counted the number of people in a group. Then a second count took place by a different candidate leader, essentially a second, independent verification. Those numbers were read aloud by the person running the caucus. This same process took place after the second realignment, so everything was transparent and ran smoothly. These were the results being reported from the caucus.

Janet: No, no, no, no. In fact, we just knew we should also have a backup. We used the app as a tool, not as a be-all and end-all. I contacted my second district organizer and told him I sent in all my information via the app and he asked me to just email him as well. I had taken photos of our caucus math worksheets, which was a key document, and I emailed them to him. So, I know my results got in one way or the other.

Moving forward, do you think Iowa should continue with caucuses or switch to primary elections?

Josh: I still think the caucus system is worthwhile and has tremendous value as an organizing tool and for party and community building. I do think there are things we can do to streamline and improve the process to add fairness. We’ve already taken some steps to make the caucus more inclusive and work for everyone and we can continue to take those steps.

Janice: In my personal view, the caucuses in the urban areas have gotten too big and unwieldy. They’re not what they were intended to be. So, it wouldn’t surprise me if this is the last caucus as we know it.  If caucuses continue in some form, we need to have a way to make them much more inclusive so that it’s not just “if you can get there during a very specific period.” I do not believe that candidates will ever put serious money into Iowa again and I do not believe we will ever see this sort of caucus again, which in my book is just fine.