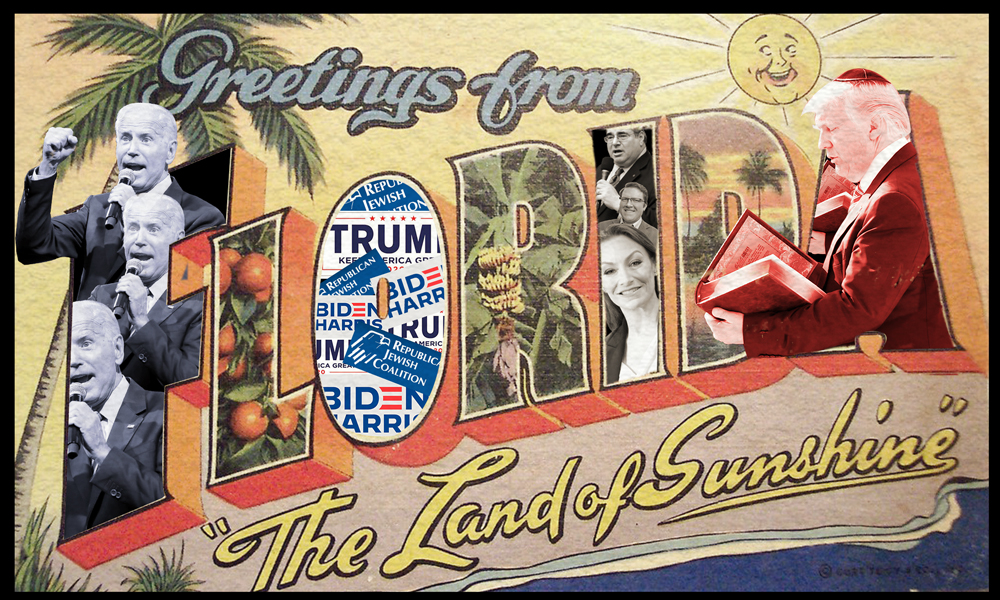 This is part of an ongoing series covering the status and importance of the Jewish vote in Florida. Read Part One, “Florida: A Jewish Battleground State?,” here.

From Washington, D.C. to Miami, Joe Biden’s campaign strategists and supporters are determined that Florida’s Jewish voters will provide the margin of victory that carries their candidate to the White House in November.

But with so much riding on Florida’s 29 electoral votes in the presidential election, and the crucial role the state’s 450,000 Jewish voters may play in the outcome, the national Biden campaign is being cautious to the point of being cagey about what their strategy will be.

After intense consultations with the national campaign’s communications office, Aaron Keyak, the Biden campaign’s recently appointed director of Jewish outreach, responded to a query with a bland statement about every vote counting.

Pointedly, Keyak made no specific reference to Israel, saying only that “we speak to Jewish values across the wide spectrum of domestic and foreign policy.”

However, shortly after his appointment, before he was effectively muzzled by campaign higher-ups, Keyak gave an interview to Haaretz which suggested why they are being so closed-mouthed.“There are sizable Jewish populations that can make a big difference in several of the most important swing states,” Keyak said, “especially Florida.”

For years, the conventional wisdom was that Israel was the third rail for American Jewish voters. Now, experts say that is no longer the case. “I’m not surprised that Keyak didn’t mention Israel,” says Ira Sheskin, director of the Jewish Demography Project at the Sue and Leonard Miller Center for Contemporary Judaic Studies at the University of Miami.“For the vast majority of American Jews, while they want to know how candidates stand on Israel, it’s not going to be the determining factor in their vote…In some of the surveys of Jews we’ve done nationally, it’s not even in the top five.”

The campaign’s reticence to disclose its strategy may be that Trump has done enough damage to himself among the state’s Jewish voters by his sympathy for his white supremacist supporters, his opposition to reproductive freedom and other issues important to the Democratic base, that there is no percentage in shifting the focus to Biden.

But if Biden’s national campaign strategists are intentionally light on specifics for what their candidate needs to do to achieve their goal, state campaign leaders and grassroots activists alike are not.

While touting Biden’s consistent support for Israel, Florida State Representative Joe Geller, who is helping lead the effort to mobilize Jewish voters, thinks the emphasis should be taking the fight to Trump where he is weakest with Jewish voters.

Geller is puzzled that the national campaign made no mention of Trump’s infamous reaction to the 2017 “Unite the Right” white supremacist rally at which neo-Nazis chanted anti-Semitic slogans, and at which one anti-racist demonstrator was killed.“Joe Biden got into this race as a reaction to the march by white supremacists in Charlottesville, who Donald Trump thinks are ‘fine people,’” says Geller. By contrast, Biden’s primary pitch should be “to unite and heal this country and help turn America away from racism, and anti-Semitism,” Geller says.

Geller says the focus will be simple: Trump’s “horrible” pandemic response, his complicity and support for white supremacy, his indifference to anti-Semitism and racism, and his party’s threats to “defund Social Security.”

“We think these issues will give Jewish voters a clear choice between Biden-Harris and Trump-Pence,” Geller says, “and we’re going to keep hammering these points home.”

Geller has been a Biden supporter for more than 30 years, since he first heard the newly elected U.S. senator from Delaware speak at a Young Democrats national convention.

Grassroots activists agree that Israel is much less important than the Democrat’s domestic agenda.“There are Jewish voters in Florida who vote based on a single issue, such as support of the current government in Israel,” says Cathy Lieblich, a precinct committeewoman for the Orange County Democratic Party. “But they overlook the Jewish values of justice, healing the world, charity and kindness to others when considering who they will vote for…These align with Jewish values.”

The Washington, D.C.,-based Jewish Democratic Council of America, which operates independently of the national Biden campaign, is airing a digital spot, in Florida and other swing states, featuring Wilmington, Delaware, Rabbi Michael Beals, of Congregation Beth Shalom, who Biden refers to as “my rabbi.”

Recent Sunshine State elections have been determined by razor-thin margins. In 2008 and 2012 Obama narrowly carried the state and won the election. In 2016, Trump won a similarly close race.

In these contests, Jews have voted Democratic by majorities of between two thirds and three fourths, or more. At the upper end of that range, Democrats win statewide races: Presidential, U.S. Senate, and Governor.

“Biden needs to hit Israel some,” says University of Miami’s Sheskin.”But his emphasis should be on his decades of support for these base Democratic issues.”

Members of the Republican Jewish Coalition (RJC) take the opposite position that Israel is the primary issue, along with other related issues such as Iran and the recent UAE pact with Israel.

And unlike the Biden campaign, the RJC is not shy about sharing their strategy for peeling off enough of Florida’s Jewish voters to carry the state for Donald Trump. It may be because their approach is obvious, or that they are trying to allay their anxiety by advertising how much money and staff they are investing in their effort.

In any case, they are determined to make a fight of winning Florida’s Jewish vote, cutting into Biden’s margin. Primarily, they plan to do this by using the President’s support for Likud policies as a wedge issue.

There are other issues.

“We’re doing this by highlighting the growing anti-Semitism in the Democratic Party,” he says. “Trump deserves credit for making Israel’s defense his number one priority,” as well as shifting the U.S. embassy to Jerusalem and withdrawing from the Iran nuclear deal.

Both Biden’s own record, and the 2020 Democratic platform, demonstrate strong and consistent backing for Israel. The Israel plank endorses a two-state solution, rejects the Boycotts, Divestment and Sanctions (BDS) movement, and pledges to maintain recognition of a unified Jerusalem as capital of the Jewish State. It also opposes new settlements in the Occupied Territory and any annexations without negotiations. In this, the Biden platform probably reflects the views of most American Jewish voters.

And the RJC’s pool of getable Jewish voters may be too small, according to the University of Miami’s Sheskin. Based on his national polling, he thinks a reasonable guess of possible Jewish Republican voters, whose overriding concern his Israel, at just 15 percent.

The RJC’s Strauss disagrees. “I don’t think so, and here’s why: Joe Biden has done nothing to stand up to pro-BDS Democrats.”

In its effort to woo Florida’s Jewish voters, the Biden campaign may have a secret weapon in Florida State Commissioner of Agriculture and Consumer Affairs Nikki Fried, who spoke briefly Tuesday night at the Democratic National Convention as one of the party’s “rising stars.”

Referring to the President’s handling of the COVID-19 pandemic, she told the convention, “Make no mistake. It didn’t have to be this bad. In the early days of the virus, Donald Trump didn’t listen to the experts.”

The 43-year-old, South Florida attorney and former medical marijuana lobbyist is a political newcomer. In 2018, she upset the Republican favorite by 7,000 votes, out of eight million cast, for the otherwise obscure, down-ballot office, making her the only statewide Democratic elected official.

Fried is considered a “secret” weapon because—incongruously—few voters seem to know she is Jewish, including Jewish voters. Especially those with no previous interest in the Agriculture Commissioner.

And yet, she is a product of a Miami Jewish day school, B’nai B’rith Youth Organization (BBYO), Hillel and three, pre-politics trips to Israel. The issue never came up in the campaign.

“Nikki Fried has enormous credibility on Israel, and that will be key in helping Jewish voters see why Vice President Biden is the better choice for us, and for all Americans,” says Representative Geller.

What would be the best way for Fried to go about this campaign?

“I think that what she needs to do is to participate with Biden at events aimed at Florida,” says Sheskin. “She needs to subtly let people know that she is Jewish, to give him a strong endorsement, which I’m sure she will.”

Here, the pandemic issue seems to be breaking in the Democrats’—and Fried’s—favor. COVID-19 is an emerging issue among Florida’s numerous seniors, Jewish and non-Jewish, including swing voters. This includes even usually Republican voters, such as those clustered in normally conservative retirement enclaves like The Villages.

For months, Fried has consistently attacked Trump’s handling of the pandemic, as well as that of Florida’s Republican Governor Ron DeSantis, who owes his victory in the 2018 GOP primary to Trump’s endorsement. In the eyes of many Florida voters, Jewish and non-Jewish, the two are now inextricably linked.

“I know what it takes to win Florida, and have been working with the Biden campaign there to share his message and turn out voters,” Fried says.“If Trump and Ron DeSantis had followed the advice of health care experts and scientists,” she says, “we would be in a very different situation than we are today. It has been a failure of leadership at every level. I think when people cast their ballots Trump’s failure on COVID-19 will be at the top of their minds.”

In an email blast to Democratic Party stalwarts, she wrote, “It’s going to take tremendous leadership to pull us out of the hole Donald Trump left us in, and that is why we must elect Joe Biden in November.”

Free-lance writer and author Mark I. Pinsky has been covering the Florida race for Moment.