As editor of my college newspaper, the Oberlin Review, part of my job was to ensure that capable underclassmen were in place to lead it in the future. I began this process in the spring of 1960 by having a conversation with Bill Schechner, a freshman two years behind me. His writing was energetic. It was easy to edit his copy. I thought he had what it took to be an editor.

I met with Bill in my office to sound him out about his interest in the paper and eventually becoming an editor. At 20, I was an experienced interviewer—I’d covered the campus visits of such prominent figures as Julius Nyerere, the founding president of Tanzania, and the singer Marian Anderson. But I had no experience recruiting staff for an organization.

First, I had to get to know him. I started by asking Bill where he was from. “Newark,” he replied.

I responded that my mother’s family was also from Newark. Two Newark families… trying to connect with Bill, I had an inspiration.

I asked: “Do you have an Aunt Beck?” Aunt Beck was my mother’s great aunt. Her name had just popped into my head as I tried to summon a possible connection with Bill.

I immediately called my mother. When she answered the phone, I asked her, “Do we know any Schechners?”

“Of course!” she responded. “I grew up with the Schechners!”

Bill—the most promising staff member of all the freshmen—who I liked enormously—was my third cousin once removed.

More than three decades later, about 15 years ago, I was selling vegetables at a Farmers Market in Maryland on a pleasant Sunday in June when Carol Reisen, my favorite customer, stopped by.

Carol and her husband Patrick told me that I wouldn’t see much of them come summer because they’d bought a vacation home and would often be out of town. I asked where their new house was located. The reply: “New Jersey.”  “Where in New Jersey?” I asked.

“My mother vacationed in Bradley Beach when she was a child,” I told her. Even as I said this, I felt as if I’d been in this space before. Once again, I asked, “Do you have an Aunt Beck?” She didn’t. I told her the Bill Schechner story to explain why I’d asked the question. And… Carol was related to the Schechners!

The following Sunday, Carol and Patrick showed up at the market beaming with the news that, indeed, we were related. She’d consulted a family tree. We were fifth cousins.

On April 29, 2012, my wife Mariette and I drove to New Jersey to attend a Schwarz family reunion in a large hall at a synagogue in South Orange. We learned how we were all related by finding our names on the family tree prepared by one of us, Susan Lowy Lubow. We are the progeny of Sophie Schwarz Bloch and Joseph Bloch, who migrated from Floss, Bavaria, to Newark in the mid-1850s. There are approximately 2800 entries on that family tree.

Besides members of my own immediate family and some cousins, Carol and Patrick were there, as was Bill Schechner, who had flown in for the event from the Bay Area. It was good to see him after many years.

I surveyed the room. I walked from table to table to get a good look. I was eager to find someone else I already knew as a friend who would turn out also to be a relative. Absurd as it may seem, I was disappointed.

But maybe not so absurd. Twice I was deeply attracted to people who later turned out to be family. It could happen again. 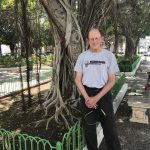 Michael Lipsky was born and raised on Manhattan’s West Side. He is a retired political scientist (Wisconsin, MIT) and Ford Foundation program officer. His best-known book is Street Level Bureaucracy: Dilemmas of the Individual in Public Services. He lives and works part-time on the farm his wife, Mariette Newcomb, co-founded over fifty years ago in Vienna, Virginia. He is an avid backpacker. He and Mariette are pleased to support the social justice work of the Northern Virginia Hebrew Congregation, where they are members.

END_OF_DOCUMENT_TOKEN_TO_BE_REPLACED

Beshert | The Zoominar Did It

When I started hosting weekly zoominars for Moment at the start of the pandemic, I never could have imagined that it would bring my husband, Joe, closer to his birth mother.

END_OF_DOCUMENT_TOKEN_TO_BE_REPLACED

Debate | ‘The traditional’ family was a relatively late invention’