Going back to his early line drawings—the round-faced, low-to-the-ground kids in A Hole Is To Dig; the scruffy, bearded, Wild Thing with pointed teeth and devilish grin or the ragamuffin children in Brundibar—you can see that Sendak liked to populate the world with Sendaks. This is particularly apparent in The Morgan Library & Museum’s current exhibit Drawing the Curtain, Maurice Sendak’s Designs for Opera and Ballet, running in New York from June 14 through October 6, where the gouache and pencil design for the Nutcracker curtain is a prepossessing, fanciful and mustachioed self-portrait of the artist. 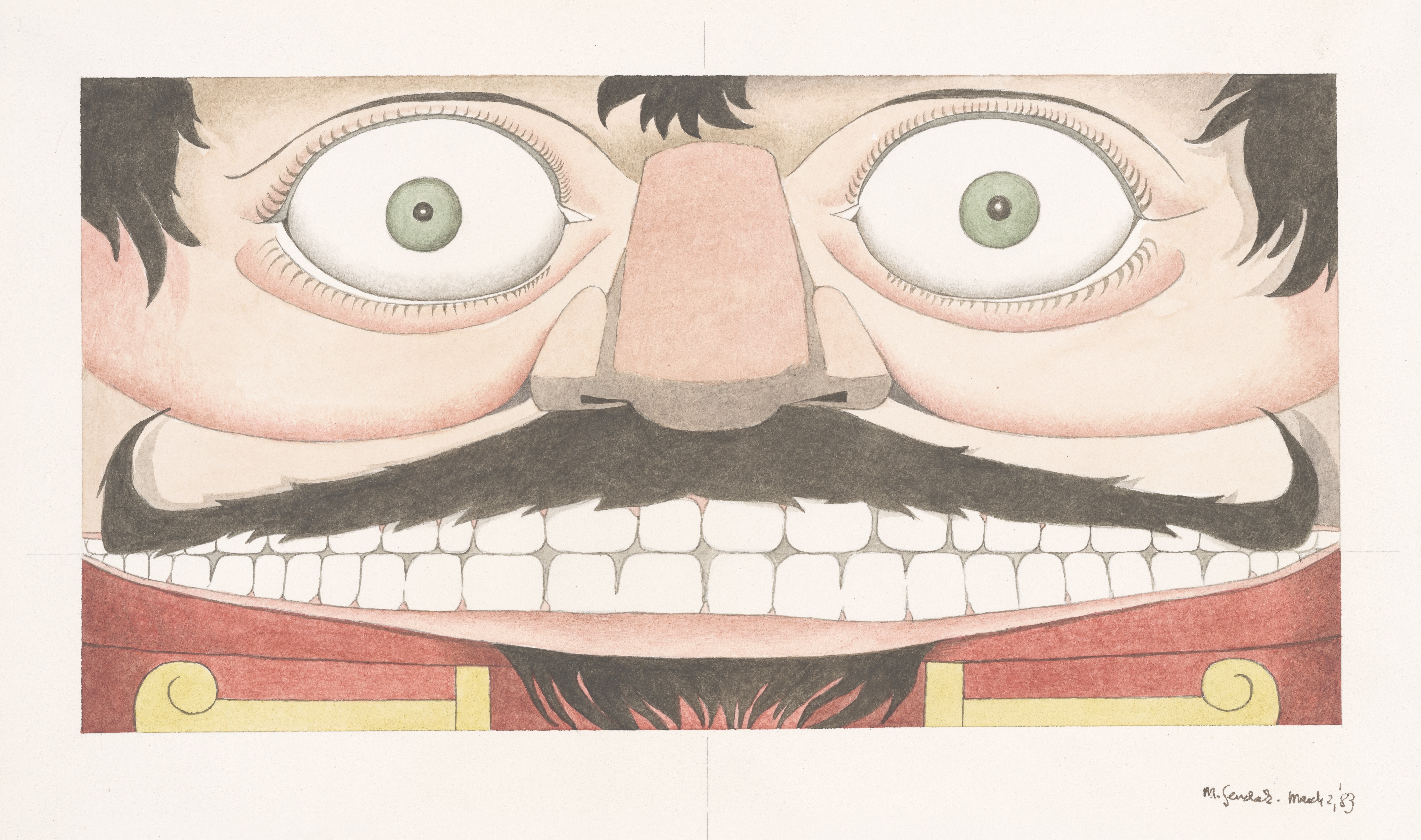 The Morgan Library show draws mostly from the museum’s Sendak holdings, materials from his first four operas (in his lifetime, he created 14): Where the Wild Things Are, The Magic Flute, The Love for Three Oranges, The Cunning Little Vixen; he also designed the Nutcracker during the same period. Sendak bequeathed these objects to the museum in gratitude for his use of their rich collection while he embarked on a new phase of his career. They represent all stages of his design process and show how eager he was to learn and collaborate. You see this in the margins of his drawings, where he made notes to himself about the most rudimentary things: how to fasten a shoe, or to remember how the weight of a headpiece rests upon someone’s shoulders. Alongside the costume sketch of a singer inside a Wild Things costume, he wrote, “There must be enough air for singer to breathe.” One of the most beautiful sequences in the show comes when a series of research sketches for the The Magic Flute is followed-up with the astonishing fully achieved watercolor for the Design for Temple of the Sun backdrop. The little painting demonstrates Sendak’s use of countless historical and artistic sources, from Egyptology to a 15th-century allegorical breviary depicting the Pelican in her Piety. Under the arch of a rainbow and framed by a set of festooned columns, he arranges a small, peaceable kingdom of animals: griffin, goat, sheep and lion. On one side, an Old Testament serpent has wound itself around a tree; on the other, the scene is blessed by a beautiful mythological goddess with golden hair and protected above by star, sun and moon. Through prestidigitation, Sendak synthesizes masonic symbols, biblical iconography, and William Blake’s cloudy pastel coloring into the uncanny, dream-like, gently droll, compressed space you would find in one of his picture books. Then he added his trademark tropical tree, which seems to have tumbled out of the place where the Wild Things live and into Mozart. 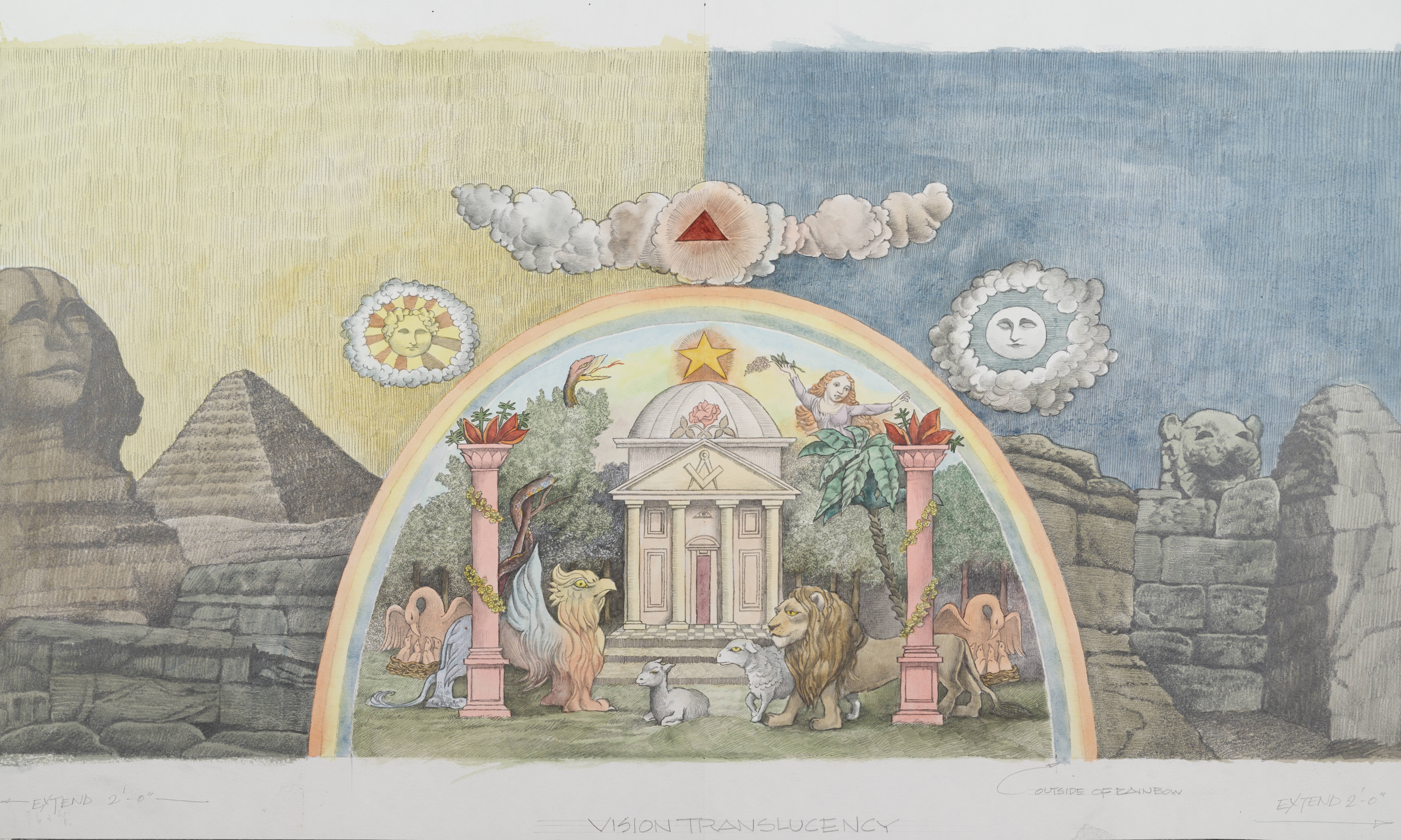 Design for Temple of the Sun, finale II (The Magic Flute), 1979-1980, watercolor and graphite pencil on paper on board. © The Maurice Sendak Foundation. The Morgan Library & Museum, Bequest of Maurice Sendak, 2013.104:124. Photography by Graham S. Haber.

How do you get from here to there, is always the question. When he was a young man, Sendak wrote a letter to his publisher and friend Ursula Nordstrom, lamenting his “atom’s worth of talent.” Measuring himself against his heroes at that time—Melville, Balzac and Tolstoy—he wrote, “My world is furniture-less. It is all feeling.” In her gracious response, Nordstrom called him a genius, praising him for the poetry of his writing. She never forgot the miracle of discovering the soft-spoken Jewish kid from Brooklyn with only a high school education, who filled his pages with a profusion of styles and feather-light crosshatching and inserted fantasy, memory and dream into his books; he always insisted that the world of childhood, like the world of adulthood, is filled with suffering and anguish. After he published Where the Wild Things Are, she said, he created books that came “from the inside out.” 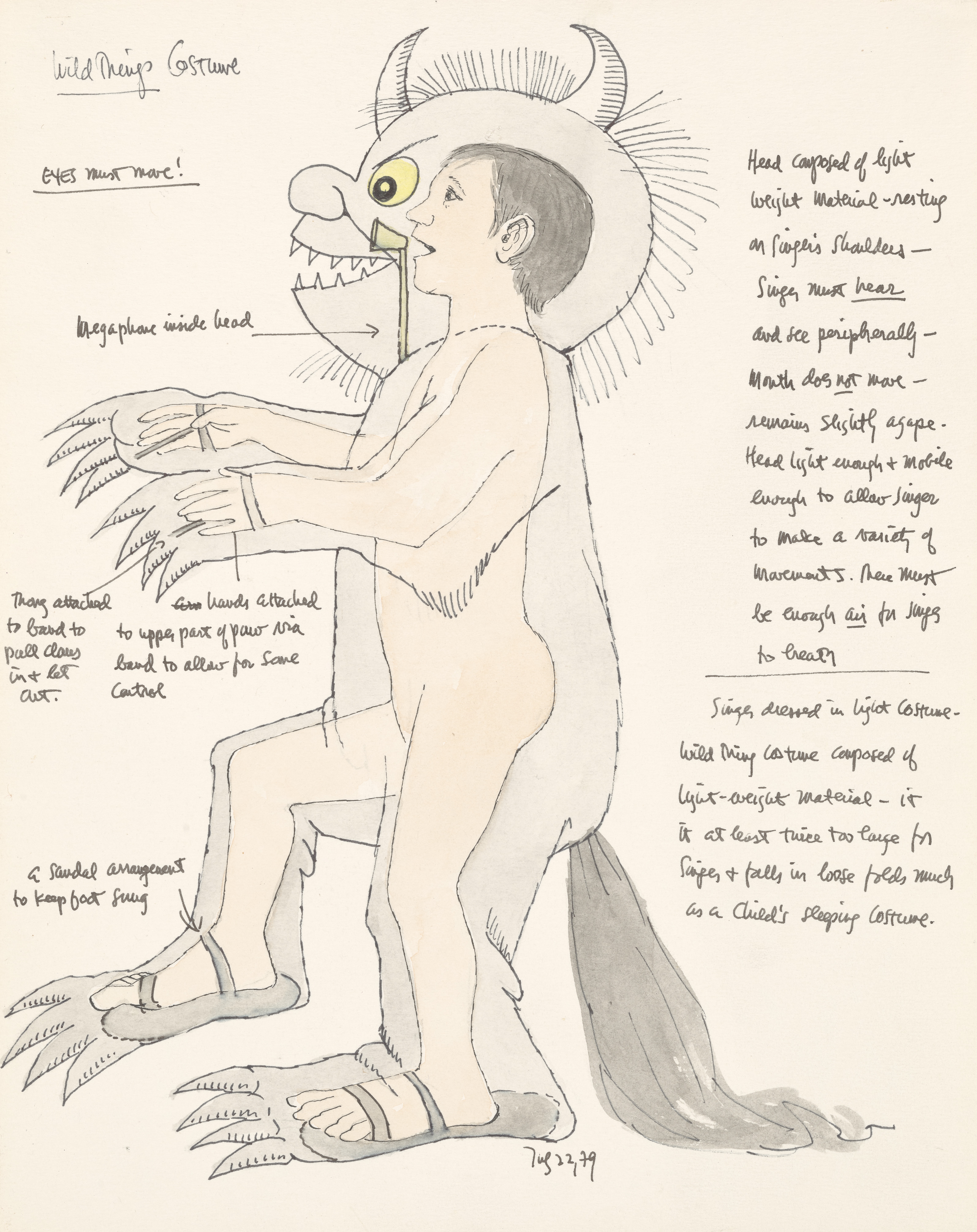 Study for Wild Things costume, with notes (Where the Wild Things Are), 1979, watercolor, pen and ink, and graphite pencil on paper. © The Maurice Sendak Foundation. The Morgan Library & Museum, Bequest of Maurice Sendak, 2013.103:19. Photography by Janny Chiu.

In 1979, when Sendak was asked to write the libretto and work on the sets for Oliver Knussen’s score for Where the Wild Things Are (this would become his first opera), he was just over 50 years old and undoubtedly the most famous living children’s book author and illustrator in the United States. He had been awarded the Caldecott, published more than 75 books, and was embroiled in controversy, particularly after publication of In the Night Kitchen, which was banned in many schools and libraries and caused some librarians to paint a diaper on his pictures of a nude child swimming naked in a colossal bottle of milk, his penis showing. Invariably, interviewers would ask if he wrote his books for children, anticipating an endearing answer. But, in truth, he wrote for himself, and his books were, as he put it, “a very private affair.” It’s hard to resist comparison with another Jewish American writer of his generation, Philip Roth. Both could be charismatic, charming, and unremittingly witty (Sendak once called the Italians in the Brooklyn neighborhoods of his childhood “the happy Jews”). Both pursued a relentless work ethic and were immersed in psychoanalysis when it was in its heyday (Sendak’s life partner, Eugene Glynn, was a psychiatrist). And both left behind a breathtaking number of avatars or doppelgängers, while breaking sexual taboos, provoking scrutiny, and willfully struggling with wild things. But unlike Roth who looked back on an idealized Jewish Newark, Sendak’s childhood had been refracted by pain and sadness. His parents were immigrants from Poland and his father’s entire family was murdered in the Holocaust; his mother was racked with guilt and trauma. For all his ambivalence, Sendak said that the round white moon that illuminates almost all his books represented his mother’s face and her love. It’s well known that her relatives, Sendak’s elderly aunts and uncles, were inadvertent models for the Wild Things. Refugees from the old country, they spoke broken English; with their bulbous noses and crooked teeth, they exemplified the hideousness that children see in adults. The relatives would come for Sunday supper and while they waited for the meal to be cooked, they pinched the children’s cheeks and said what people said in those days: “We could eat you up, we love you so.” In the libretto for the opera, the Wild Things are given proper names: Moishe, Bernard, Aaron, Zippy and Emile. They fly, swim and breath fire, sputtering in a variant of what seems like broken English with a little Yiddish tossed in. “Kkka!” they say and, not to miss the point that this is a Jewish geschrei, the phrase “Vilde-chai ah mi-mah-mee-ooh!” weaves in and out as a refrain. 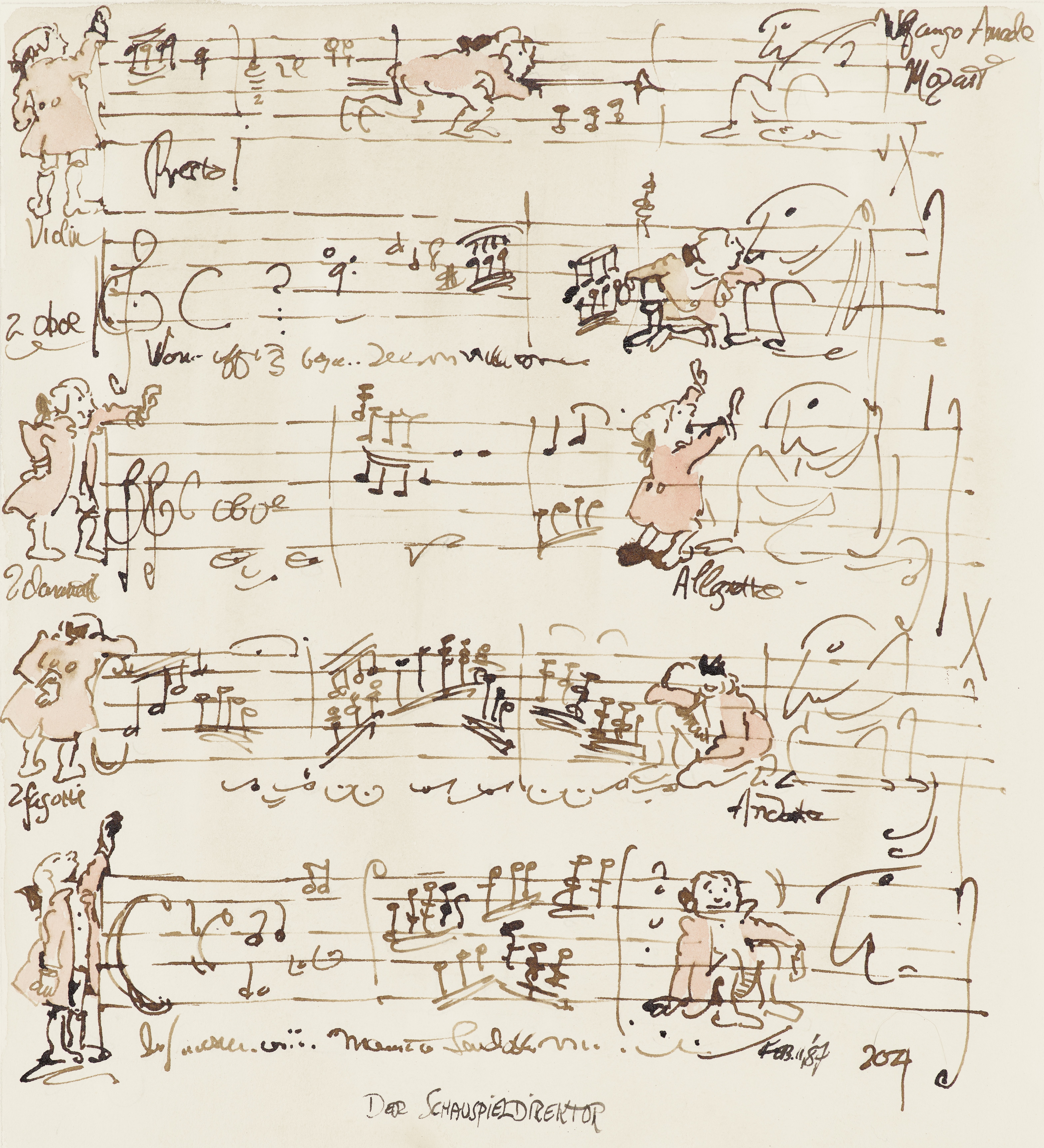 For Sendak, the detour into opera and ballet allowed him to see his drawings enlarged, set into motion, and expanded into three dimensions. Free from the typecasting and misunderstandings that had accompanied his fame and what sometimes felt like confinement in children’s books, he was “drawing the curtain,” stepping into a larger world where he could fulfill his early aspiration to create a thoroughly imagined universe, as he had put it, a world with furniture. On top of that, this new world was graced by music.

Sendak believed that certain composers and compositions helped him find the right colors and hues. He had always worked with music playing in the background and for decades he had conducted his own musical exercises, fantasy sketches, with rules in which he would fill a sheet of paper, drawing quickly and freely in sequence, left to right, from top of a page to bottom, during the time it would take to listen to a piece of music. Some of the sketches are on view in the exhibition alongside a whimsically decorated page based on the score of Mozart’s Der Schauspieldirektor. It shows a Sendak-shaped and be-wigged Mozart literally standing on ledger lines, scribbling, singing, pensively seeking inspiration, overcome with grief and with joy and a little drunk. In the drawing, Sendak imagines Mozart as an intermediary for the genius of music while his fine and astonishingly free pen line is simultaneously a reflex of joy and a deflection against grief.

Top image: Diorama of Moishe scrim and flower proscenium (Where the Wild Things Are), 1979-1983, watercolor, pen and ink, and graphite pencil on laminated paperboard. © The Maurice Sendak Foundation. The Morgan Library & Museum, Bequest of Maurice Sendak, 2013.103:69, 70, 71. Photography by Graham Haber.

END_OF_DOCUMENT_TOKEN_TO_BE_REPLACED

Opinion Interview | Now is the Time to Fix The Climate

Zero Hour, the anti-climate-change group that Jamie S. Margolin founded two years ago when she was 16, calls itself “a movement of unstoppable youth.”

END_OF_DOCUMENT_TOKEN_TO_BE_REPLACED

What do President Donald Trump and the religious right see in each other?