On September 6, days before Rosh Hashanah, President Donald Trump gathered some of his closest Jewish advisers to sit next to him in the Oval Office as he conducted the traditional presidential High Holiday conference call with rabbis and Jewish leaders. Trump initially stuck to his written remarks, including the inevitable shofar reference and the repeated praise to his “three beautiful Jewish grandchildren,” before moving on to self congratulatory comments about his pro-Israel decisions.

The people sitting next to Trump around the Resolute Desk make up, to a great extent, the cadre of advisers who have the president’s ear on issues relating to the Jewish community and Israel, two overlapping issues that Trump uses interchangeably. The group included son-in-law and top adviser Jared Kushner, Middle East peace envoy Jason Greenblatt, Treasury Secretary Steve Mnuchin (the most senior Jewish member on Trump’s cabinet) and joining by phone was David Friedman, the president’s hand-picked ambassador to Israel.

Trump, just as he has done in his previous career as a businessman and just as he conducts the U.S. administration, surrounds himself with loyalists, family members and old friends to provide him with advice when it comes to Israel (and Jewish Americans, too). But, as is the case with Trump on many issues, those who have his ear don’t necessarily get to influence policy or decisions. At the end of the day, Trump is his own man who reaches conclusions based, many times, on instinct rather than advice. He has also chosen not to appoint a liaison to the Jewish community, leaving much of the work done in previous administrations by designated staffers to his close advisers who happen to be Jewish, or to occasional conversations he holds with Jewish friends from the business world.

Here are some of the members of the American Jewish community with whom the president consults, or at least discusses, issues relating to the community: 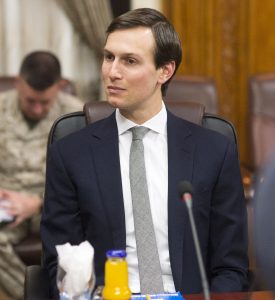 Jared Kushner
Trump’s favorite son-in-law is by all means his go-to authority on all things Jewish. Kushner, who is Orthodox and whose children with Ivanka Trump attend Jewish schools, was tapped early on by Trump to take on the Middle East peace portfolio, in addition to his many other responsibilities at the White House. Why him? Trump hinted shortly after the elections that it was Kushner’s Jewish background that makes him the ideal candidate. “I mean, he knows it so well. He knows the region, knows the people, knows the players,” Trump said of his Jewish son-in-law. Since, Kushner has travelled to the region and has been the driving force behind a peace plan yet to be revealed. He sits in every meeting Trump holds with Israeli leaders and takes calls from Jewish supporters of the president. His rare public speeches were at events relating to Israel, including the Saban Forum in Washington, DC and the opening ceremony of the U.S. embassy in Jerusalem in May. 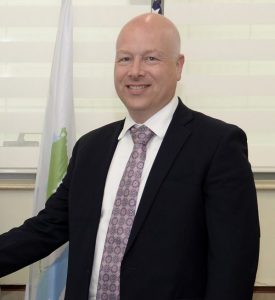 Jason Greenblatt
Trump’s former top in-house lawyer, who was the brains behind many of his real estate deals and who sat only doors away from him at Trump Tower, was selected just before the Republican primaries in New York to lead the campaign’s outreach to the Jewish community and advise on Israel-related issues. Why Greenblatt? He, too, is an Orthodox Jew, he is extremely close to Trump and enjoys the president’s trust after working for the organization for 19 years. And, for Trump, the combination of real estate experience and ties to Israel makes for an ideal expert on resolving the seemingly insoluble territorial dispute between Israelis and Palestinians. “He is one of the great real estate lawyers of the city of New York,” Trump said when first introducing Greenblatt. “I like to get advice from people that know Israel, but from people that truly love Israel.” 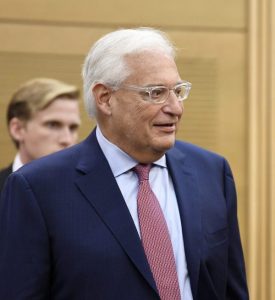 David Friedman
Similar to Greenblatt, Friedman too was chosen by Trump thanks to his loyalty, his years-long work relationship with Trump and his ties to Israel. A bankruptcy lawyer who had gotten to know Trump and befriend him when working on real estate deals, Friedman is an Orthodox Jew with strong ties to the West Bank settler community. Since taking office as U.S. ambassador to Israel, after a tough confirmation process, Friedman has emerged as an independent voice who almost singlehandedly led the Trump administration to take positions aligned closely to Israel’s right wing, including the embassy relocation to Jerusalem, changing the terminology regarding the West Bank and Gaza and refusing to publicly adopt a two-state solution. 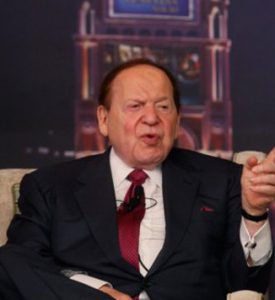 Sheldon Adelson
The Las Vegas casino billionaire is neither a friend of Trump nor a loyalist. He had no ties with Trump before the elections, but was quick to identify his ascendance during the primary season and put his hefty political funding clout behind him. In return, Adelson steered Trump to take action on Jerusalem and to break the Iranian nuclear deal. While it is hard to see much personal closeness between the two billionaires, Adelson is a frequent guest at Trump’s White House and is always on the line for advice, and requests, when the administration deals with issues of Israel and the Middle East. 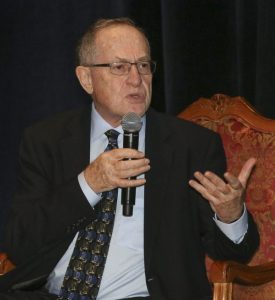 Alan Dershowitz
Although the retired Harvard law professor is a Democrat, he has forged a unique relationship with Trump. The president, prone to admiration of TV celebrities, grew a liking to Dershowitz’s decisiveness and enjoyed his legal punditry, which sided with the president on many instances. Dershowitz, at Mar-a-Lago and the White House, has spoken at length with Trump about the Middle East conflict, conveying his staunchly pro-Israel view which seeks to defend Israel before promoting a two-state solution. During this year’s High Holiday conference call, Dershowitz was honored with asking the first of two questions to Trump, in which he congratulated and praised Trump for moving the embassy and recognizing Jerusalem as Israel’s capital. 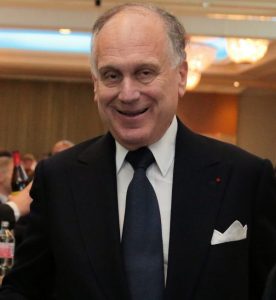 Ron Lauder
A fellow New York billionaire, Lauder, who is the president of the World Jewish Congress, has known Trump for years, and the two have always kept open lines of communication. Early in the presidency, Lauder was the one whispering on Trump’s ear and working to convince the newly elected president to take a bold move to advance Israeli-Palestinian peace. Though his input in shaping the plan was minimal, Lauder still speaks highly of the president and was among the first to stand up for him last January, when questions were raised regarding Trump’s ability to serve. “The President I have seen is a man of incredible insight and intelligence,” he said at the time. 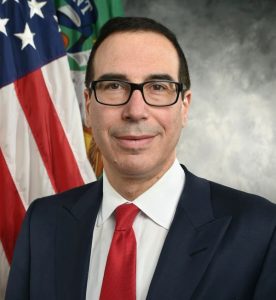 Steven Mnuchin
Trump’s treasury secretary has very little involvement in the American Jewish community and had never had any dealings with Israel. Still, the former investment banker turned film producer is inexplicably viewed by Trump as an asset when it comes to dealing with Israel and the Jewish community. Not only was he asked to sit next to Trump when the president made his recent call to Jewish leaders, but Mnuchin was also selected to head the American delegation to the opening of the U.S. embassy in Jerusalem.

Sorely missing from the list are, of course, the experts. Trump, with his disdain to government professionals and academics, has chosen to keep outside the close ring of advisers on Jewish and Israeli issues, seasoned diplomats and foreign policy experts who had spent decades learning the issues, and has not sought advice from Jewish communal leaders, which he views, by and large, as political adversaries. This choice has resulted thus far with an echo chamber of advisers bent on reshaping Middle East policy that has guided U.S. administrations for decades, and with a small circle of Jewish advisers used, at times, as Trump’s fig leaf when accusations of anti-Semitism or lack of sensitivity to the community are directed at him and his administration.