My mother is a gifted artist, which was lucky for our family. Had she not been awarded a scholarship to attend the Massachusetts College of Art and Design to become an art teacher, she and my father would never have met. And I would not be the overjoyed owner of a beshert coffee pot. 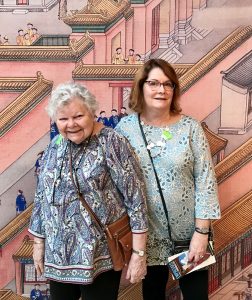 Martha and Judi at the Peabody Essex Museum in Salem Mass., 2018.

Mom grew up in Woburn, Massachusetts. It wasn’t until her third year of art school that her parents reluctantly allowed her to leave home for the big city of Boston. With few options available to single young women in the 1950s, she found a room in a Settlement House in Boston’s West End, where the residents contributed to their room and board by volunteering in the neighborhood. Mom taught kids how to build model airplanes. Men and women were housed on separate floors, but ate together in the common dining room. That’s where my father first spotted the beautiful brunette with sparkling eyes seated across from him. 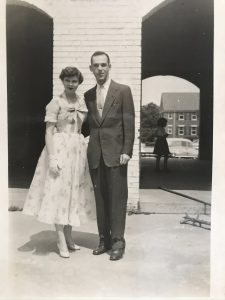 The day Martha Feinberg became engaged to Jim Wainger in 1951. 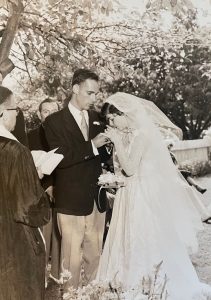 A whirlwind winter courtship became a surprise spring engagement (once Dad assured his mother that he’d fallen for a “nice Jewish girl”). He was in his last year at Harvard Law School. A small summer garden wedding followed his graduation and the newlyweds moved to Washington, DC for his first job as a lawyer with the federal government. As so many of her generation did, Mom left school without a degree, soon finding meaning in the traditional roles of wife and mother.

She never became an art teacher but continued to draw, paint and sculpt. Her pieces were part of the large art collection that my parents amassed over their sixty-year marriage. Over time, I inherited some of her early paintings but she kept one of my favorites since I was small, a humble still life from 1960. Mom would have painted it when she was 30 and I was four. A few years after my father passed in 2011, she presented it to me as a gift. The painting now hangs in a prominent place in the house my husband and I share with her. I appreciate its simple beauty every day—just a couple of oranges and three modern coffee pots.

Fast forward to 2020. We have all needed something to lift our spirits. For me, that means indulging my passion for Mid Century Modern design by scrolling through photos on favorite sites. Until one day I stopped scrolling. There it was, on a Facebook page for a store in New Hampshire. Unmistakable. Meant to be. One click. Sixty years late. The beshert coffee pot was home 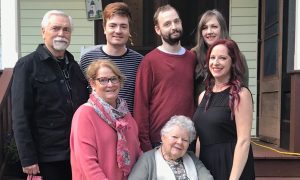 Judi Connery lives in Warwick, Rhode Island with her husband Dan and her mother, Martha Wainger. Before becoming her mom’s caregiver, Judi had a long career in non-profit communications and marketing, primarily in higher education. Her parents passed their love of art on to her, and she has passed that on to her children, Ian and Alexis. She also has a stepson, Harrison. Judi and Dan have two pampered poodles, Boris and Natasha. Martha and Judi look forward to the pandemic’s end when they can again take classes at the Warwick Center for the Arts and visit museums. And coffee shops!

Top photo: Judi’s beshert coffee pot lives on a shelf with her father’s beloved martini pitcher directly below her mother’s painting. Martha was “amazed and thrilled” at its surprise arrival.

One thought on “Beshert | The Meant-To-Be Coffee Pot”