A European country bombed into rubble. Refugees streaming across multiple borders. Not enough food, gas or electricity. Thousands of children separated from parents, and wives separated from husbands. Massive amounts of housing destroyed. Piles of debris everywhere. Russian soldiers raping terrorized women. A war between good and evil, between a monstrous tyrant and brave opponents. European leaders and peoples trying to decide who they should be.

That all happened eight decades ago, didn’t it?

When Alfred A. Knopf published Aftermath in the United States this winter, it’s unlikely anyone at the publishing house thought the book’s subject particularly timely.

How quickly the force and implications of a book can change.

Before being translated into English, Aftermath spent 48 weeks on German bestseller lists and won the 2019 Leipzig Book Prize for its author, Harald Jähner, a cultural journalist and former editor of The Berlin Times. Since scores of books about postwar Germany have appeared over the past few decades, an American reader’s first question might be: Why so popular? Does Aftermath make Germans feel better about their postwar performance? Offer them pride in Germany’s economic miracle? Praise the state’s admirable history in providing reparations to its victims? Celebrate its successful transition to unification and democracy?

Jähner depicts Germans in their “time of the wolves,” especially the “hunger winter” of 1946-47, as routinely amoral. (The book’s German title is Wolfszeit, Time of the Wolves.) Even the most sophisticated stole food and other items, acts that lost their stigma. They quickly forgave themselves for accepting Nazism, saw denazification as a “humiliation” and viewed themselves as victims. Yet they were eager to snap back to normal life. As early as summer 1945, journalist Ruth Andreas-Friedrich wrote in her diary, “Never have we been so ripe for redemption.”

“The Holocaust,” Jähner explains, “played a shockingly small part in the consciousness of most Germans in the post-war period.” Life proved too tough, leaving “no room in people’s thoughts” for it. Of the roughly 75 million people in Germany in the summer of 1945, 40 million were displaced persons. The impact of the war lingered. The official end of rubble clearance in Dresden didn’t come till 1958. The last camps for Vertriebene, the ethnic Germans expelled from the Eastern and Central European annexed territories at the end of the war, closed in 1966. Only with the 1963 Auschwitz trials in Frankfurt—the first time the Federal Republic itself tried SS personnel under German law—did Germans begin to reckon with the Holocaust.

“Racism,” Jähner writes, “lived on and was now turned cheerfully inwards.” The Nazi notion of one German Volk disintegrated. Regional identities—Schleswig, Thuringian, Mecklenburger—took over, and a fair number of Germans turned on one another. Germans, according to Jähner, feared that “intermingling threatened the innate regional characteristics of local ethnic groups.” The head of the Bavarian Farmers Association declared it “unnatural for the son of a Bavarian farmer to marry a North German blonde.”

Yet Jähner reports that this “anxious and despairing” era was “also a time of laughing, dancing, flirting and lovemaking.” Privileged Germans began taking vacations as early as 1945. The German “hunger for culture” revived. Although Americans saw ordinary Germans as harboring “mass sympathy” for Nazism, the Soviets in their sector saw young Germans as having been “seduced” by the Nazis and granted them amnesty.

A 1948 headline in The Times of London caught the evolving spirit: “The Germans Are Getting Cheeky Again!” Jähner mentions (and chastises) the “bafflingly good mood of Germans” as life began to normalize again as a result of currency reform, the end of food ration cards, the establishment of the Federal Republic and the adoption of Article 131 of the 1951 West German constitution, which permitted the reinstatement of former Nazis banned by the Allies. 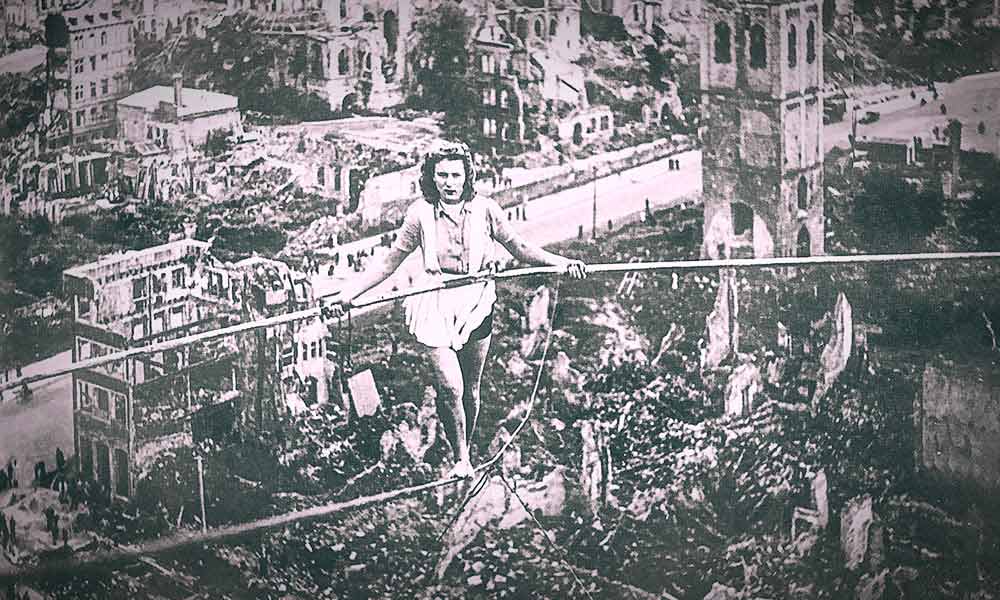 Margret Zimmermann, of the Camilla Mayer Troupe, balances on a tightrope over Cologne in 1946. (Photo credit: Courtesy Alfred A. Knopf)

Jähner’s ultimate interpretation of the postwar decade is that Germans needed to ignore their complicity in Nazism in order to move beyond it. By forgiving the Nazis, they could forgive themselves. Once the Germans lost, Jähner writes, it “seemed as if the fascism in the souls of the Germans had vanished into thin air.…Most of them had dropped their loyalty to the Führer as if flicking a switch.” The Allies, with the exception of the Nuremberg and subsequent war crimes trials, eventually embraced the idea that they needed to let ordinary Germans ignore their own complicity if West Germany were to be resurrected as a democratic state. The Soviets reached a similar conclusion about what was required if East Germany were to fit smoothly into the Soviet Union’s Warsaw Pact.

Many Germans presumably bought Aftermath to understand, and perhaps admire, their postwar forebears. It’s doubtful they closed it feeling pumped up.

One explanation for Aftermath’s popularity at home stares an American reader in the face. The book contains relatively few pages about Jews—not to mention gays, Roma, left-wingers, White Rose survivors or anti-Hitler exiles (with the exception, in the latter case, of some passages about the courageous Thomas Mann.) In short, the war’s much-written-about innocent victims—those forced to suffer before the
aftermath—are largely absent. From the perspective of German readers, it’s a book almost entirely about “us.” Perhaps they felt, given the endless shelves of tomes on the Holocaust, that it was about time.

In fairness to Jähner, when he does write about Jews and other innocent victims, he does so with the utmost respect and sympathy. In one particularly passionate passage late in the book—a departure from his matter-of-fact tone in describing the postwar decade—he writes, “The collective agreement of most Germans to count themselves among Hitler’s victims amounts to an intolerable insolence. Seen from the perspective of historical justice, this kind of excuse—like the overwhelmingly lenient treatment of the perpetrators—is infuriating.”

So readers of Aftermath should not blame the messenger but thank him for his reportage. Jähner never flatters his people—he tries to understand them. Aftermath’s intention, he writes, is “to explain how the majority of Germans, for all their stubborn rejection of individual guilt, at the same time managed to rid themselves of the mentality that had made the Nazi regime possible.”

Can the experience of those postwar Germans provide any insight into what we’re fated to see among Russians and Ukrainians? One must look individually at each country. Any of us can detail the stark differences between Germany in the wake of its World War II defeat, Ukraine today after Russia’s brutal invasion, and Russia in the face of nearly worldwide revulsion. But it’s the resemblances, the universal elements of war and its upshot, that make Aftermath powerfully instructive about the enduring psychological impact of national conflicts in which good and evil clash.

German soldiers returned home as shells of their former selves, and Jähner details how they experienced sharp tensions with their wives and children. Many German women agreed with advice columnist Walther von Hollander, who, Jähner notes, depicted German men as “burned-out losers who, with their penchant for aggression, had led the world into the worst disaster of all time.” (Many had also, we know now, committed or witnessed unthinkable atrocities.) Will ordinary Russians, as they grasp what Putin committed in their name—but also with their sufferance of his rule over two decades—take shared responsibility after he’s gone for the carnage he has visited on Ukraine? Will they allow that sense of responsibility to elevate them to a better society and government?

Ukrainians will face their own questions. Tied historically in so many ways to Russia, yet still a distinctive people now united in hatred for Putin and the Kremlin, will they find a way to forgive ordinary Russians for Putin’s atrocities? Or will they insist, in one way or another, on holding them to account?

Jähner convincingly shows that Germany in its postwar decade—with help from its conquerors—set aside justice to achieve democracy and reconciliation. One hopes, in the aftermath of Russia’s crimes against Ukraine, that history won’t repeat itself, and that justice and democracy will advance together.

END_OF_DOCUMENT_TOKEN_TO_BE_REPLACED

One thought on “Book Review | Germany’s Time of the Wolves”