Beshert | Warming to a Climate Maven

I was in the social hall of Chicago’s Hyde Park Union Church, hoping it wasn’t too obvious that I was Jewish.

It was August 2017. I had come to hear a lecture about global warming. A flyer taped to the marquee outside told me that the speaker was David Holmquist of Citizens’ Climate Lobby.

I took a seat in the second row as the speaker arranged his laptop and flyers on a table six feet from me. He moved with a slow, lanky grace that belied his 6-foot-5 frame. Dressed in dark pleated trousers and a white dress shirt, he looked like the austere, thin-faced farmer in “American Gothic.”

I wasn’t sure I liked his stern countenance, but then he started speaking. Despite the formality of his appearance and the impressive mastery of his subject, he was friendly and respectful of even the most annoying people who attend free lectures in Hyde Park. And he laid out a strategy for getting Congress to enact a tax on fossil fuels that sounded eminently sensible.

I joined CCL that night.

Over the next month, I met with David three or four times, to see how CCL might use my skills (well, that was my professed aim), but I still knew almost nothing about him. I wanted to know if he was in a relationship, for starters.

Finally, after obsessing about it over a two-week period, I sent the following email: “I think I’d enjoy learning more about you. Are you interested in getting together socially?  (‘No’ is an acceptable response, albeit not the one I’d prefer.)” It represented an expenditure of 2.6 hours per word.

The first evening we spent together he gave me an e-copy of Kent Haruf’s “Our Souls at Night,” in which a 70-year-old widow invites her neighbor, a widower, “to come and sleep in the night with me. And talk.”

David was four years younger than me. I fell hard. Lying next to him in the night, I wanted him to teach me everything he knew.

We found that we shared a godless commitment to tikkun olam. Both atheists, we believe the work needs to be done by humans, acting together.

We also discovered common quirks. He was reluctant to admit that he kept a spreadsheet documenting every dollar he spent until I mentioned that I did the same thing, in an iPhone app. When he learned that I, too, conserve water in the bathroom by judicious flushing, he exhaled with relief.

David knew what “tikkun olam” meant, but he didn’t know the word beshert. I explained it. 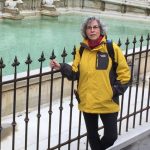 Judy Peres is a retired journalist whose work has appeared in the Chicago Tribune and the Jerusalem Post, among other outlets. Raised in the Labor Zionist movement, she spent many years in Israel. David Holmquist is a political activist who grew up in Omaha, the fifth generation of grain traders, and was radicalized by the Vietnam War. They currently live together in Chicago and are working on a memoir. Maybe two.