At age 43, newly divorced, I was not ready for what happened when a fellow temple member made me an innocent offer.

He’d recently moved from SoCal to my town, Sacramento. Upon hearing that I regularly traveled to Orange County for work, he suggested that I allow him to give a friend of his in Orange County my phone number.

His friend, Joan, called and we arranged to meet at my hotel lobby the next time I was there. Picture this: I had a pony tail (I’d let my hair grow for a year; my first time with long hair), socks with sandals (it was chilly), cargo shorts (to carry all the stuff a neurotically prepared Scout would need), a flannel shirt (did I say it was chilly?), and a hat (to cover my receding hairline).

She was (is) classy, a knockout and smart (I was to find out as we talked). Also off a divorce, she’d intended to give my contact info to a friend but came to check me out first. She saw something in me (imagine that, from the picture I just described) and we agreed to get a snack. 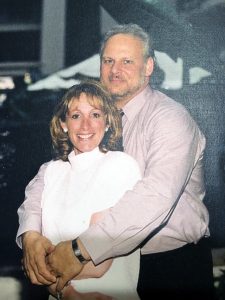 The couple early in their relationship, 1996

That first date led to many others. She had two boys, I had two boys and a girl; we both had shared custody. Time stretched and over the next three years; we probably funded an airplane or two for Jet Blue as either I traveled south or she traveled north.

We were in love but we were both busy working and raising our kids in a very big state. To stay together, one of us would have had to move, an untenable situation for both parenting (our kids had their schools, friends and extended families) and work stability.

The more serious it got, the more real it got. I got cold feet. I was afraid of my own emotions, having only recently finalized my divorce and still requiring interaction with my ex because we shared custody. I finally chickened out, breaking up over the phone. I was too chicken to do it in person and I know it hurt us both.

But I couldn’t get her out of my mind (there’s a song there, I think). A couple years later I drove down from Sacramento to see…what, I didn’t know. I’d lost her address, but the car knew exactly where to turn. When I rang the bell, a man answered, so I fumbled some excuses and left, figuring that was that.

Twenty years later(!), she had a work trip to Sacramento. I didn’t know that our boys had stayed friends until she emailed my oldest son asking if it would be okay for her to reach out to me. Would I be willing to “have coffee” with her? 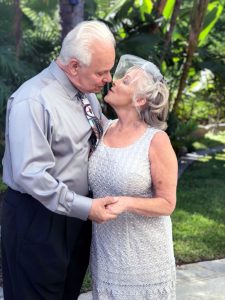 We emailed, called and texted, and 16 months later, I literally picked her up at the airport. TA DAH! It was like old times; even better!

In the intervening years, our kids had become adults and friendships sustained us. I was to discover that Joan has an especially wide circle of them, including the man who answered her door when I rang the bell. And it turns out she had seen me in the car but wasn’t quick enough to catch me.

I and my motorcycle—I’m a BMW rider for over 30 years—had attended rallies all over the country: in Washington, Montana, Illinois, Arizona, Utah, Pennsylvania, Florida, Massachusetts, just to name a few states. The first time I proposed to her (I was so joyful, I did it twice), I got her to get on a bike to see how she “fit” and then dropped to a knee in front of the crowd. (Lots of gasps.)

I promised her adventures and to take her out of her comfort zone. Since we got married and I moved to Orange County, we’ve gone on motorcycle trips throughout the west.

Stuart Sorkin and his beshert, Joan Serot Sorkin, live in Anaheim, California, where Joan was a founding member of temple Adat Ari. Stuart is retired from CalTrans, California’s Department of Transportation; Joan is retired from entertainment venue Medieval Times. “We both have grandkids to spoil and lots of places to ride” their motorcycles, Stuart emailed Beshert from Grants Pass, Oregon on their ride home from Coeur d’Alene, Idaho. Their five grown children and their families all live in California.

2 thoughts on “Beshert | Un-chickening Out”