I met Ruth Levy in 1975 at the Jewish Community Center in West Orange, New Jersey.  We were both seniors at Northern New Jersey colleges and helped to organize a social at the JCC between the two campuses. 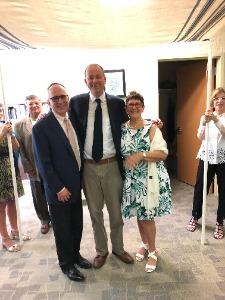 Michael and Adrienne at their wedding at Temple Sinai in Las Vegas, August 23, 2019, with Rabbi Malcolm Cohen.

It started with finding an open chair where Ruth and her friends were sitting.  I spoke with everyone and knew as soon as Ruth and I started chatting, there was that certain spark you feel when you have met someone special.  We spoke for hours about everything.  In what we both jokingly referred to as a mixed marriage, Ruth from an Orthodox upbringing and me from a Reform setting, we married in July 1979.

Our lives were upended in 2014 when Ruth was diagnosed with a rare form of Leukemia.  With expert treatment at Johns Hopkins Cancer Center in Baltimore, Ruth became cancer-free in 2016.  I retired at the end of 2017 so we could enjoy life together.  A co-worker gave me a Viking cruise catalog with a recommendation to take the March 2018 Amsterdam tour to see the tulips blooming.  Ruth enthusiastically booked this tour as soon as I showed it to her. Sadly though, a virulent form of Pneumonia would claim Ruth’s life early January 2018. 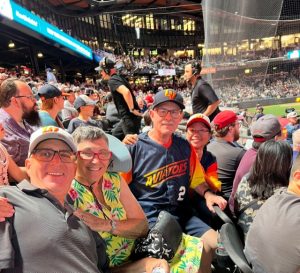 Michael and Adrienne, left, at a local minor league baseball game, April 2022 with friends Dave and Marcie Wise. The Wises were also new to Las Vegas from Northern Virginia when the foursome met at temple. Dave encouraged Michael to share his and Adrienne’s beshert story with Moment.

In an attempt to move forward, I went on the trip myself just eight weeks after her passing. Well, honestly, I was going to cancel the trip, but something inside me said otherwise. Ruth and I were of the same look-ahead mindset. There would be no lamenting, either, over her long illness (she never wanted anyone to feel sorry for her or to say that she was brave or courageous). I went on the cruise to honor her and to try to reconstruct my life.  It was not easy though getting on that cruise ship—I started to tear up as I boarded.

On the second night of the cruise, I arrived late to a culinary presentation. Scanning the lounge for a seat, I noticed one open chair situated across from several women who welcomed me to join them.  As soon as I started chatting with Adrienne, our common bond became our long happy marriages; mine with Ruth of almost 38 years and Adrienne’s with Victor of 34 years. They’d married the same year as Ruth and I. 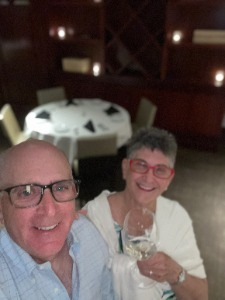 Once again, there was that spark I felt when you meet someone special, but what lousy timing…so soon?

Since I lived in Alexandria, Virginia and Adrienne in Las Vegas, our relationship was built on lengthy phone calls, texts and Skype sessions. We were both very busy with our respective lives. Our first physical meeting post-cruise was at a concert in Portland, Oregon.  We were happily married exactly one year later by Rabbi Malcom Cohen of Temple Sinai in Las Vegas.

Adrienne and I believe that Victor and Ruth made beshert happen.

Michael Folkman is a retired CPA and defense contractor; Adrienne taught high school before a career in banking and commercial real estate. They live in Las Vegas. The Folkmans enjoy hiking, biking, traveling and playing pickleball. Adrienne has pursued a variety of volunteer opportunities including performing as a puppeteer with a non-profit children’s service organization. She has also raised funds for the Las Vegas Philharmonic. The couple are members of Temple Sinai in Las Vegas.