We didn’t go skiing often because it was expensive. But in the winter of 1960, my friends and I pooled some money together for a ski trip to the Catskills. I was already a mother—a single mother when it was not so popular as now. I had been married twice already, and had my little girl, Miriam, with my second husband whom I had divorced shortly before the trip. She was about two years old at the time and I sent her to stay with friends for the weekend. There was a spot for me in the car, so I went.

Fred was there too. He was a friend of a friend and I knew right away that I liked him. He was intelligent—a professional engineer—and he was short. His height of 5’5” perfectly complimented mine of 4’7”. Fred, like me, was also originally from Germany. I was sent to Switzerland on a kindertransport in 1939. He was lucky though; he escaped with his parents to Portugal in 1938.

I knew right away that I wanted to develop a relationship with Fred, but some other girl in his ski group tried to get in the way and said “he’s mine” and told me to keep my hands off him. “Let’s see,” I replied. Within a year Fred and I were married.

I’ve said this before, but I’ll say it again now, my first two marriages were legalized love affairs, but with Fred, it was true love.

We shared everything during our marriage, up until his passing in 1997. He supported my career when I was just starting out as a radio talk show host in the 80s, coming with me every Sunday when I recorded the program at WYNY. He got a big kick out of me being a sex therapist, but he never talked about his sex life.

Fred and I shared a love for skiing and hiking. We had the same values about family life; he took care of the children when I was busy with lectures and talk shows. He loved Miriam like his own daughter and ended up legally adopting her. He was a wonderful father to her and Joel—our son. We all miss him.

I don’t know for sure if relationships can be beshert, maybe. But what I do know is that Fred was the right husband for me.

Dr. Ruth Westheimer is a renowned sex therapist, author and media personality, best known for her popular 1980’s radio show Sexually Speaking. Both she and Manfred ‘Fred’ Westheimer escaped Nazi Germany. Ruth and Fred were married for 36 years until Fred’s passing in 1997. Together they raised two children—Miriam and Joel. 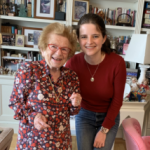