Beshert | There Really Was a Punch Line

I first met Dawn in October 1982, by the punch bowl at a monthly singles event organized by the Northern Virginia Jewish Community Center. I was 27 and had relocated to Virginia from California that January to do a post-doctoral fellowship at the US Naval Research Laboratory in DC after getting my Ph.D. in theoretical physical chemistry. Dawn, 24, had moved to Virginia from Ohio that spring for a job after getting a master’s in gerontology.

We both thought the program that evening would be a travelogue but discovered it was really a sales pitch for a ski trip that the JCC was organizing. Neither of us skis, so the program was a loss, but the meeting over the punch bowl definitely was not.

We went out on a date the next month to see the movie Hester Street and have a late evening snack. We had a good enough time together that I tried to schedule another date right away but our calendars conflicted. I persevered. We talked on the phone every week. It took until February 1983 to align our schedules.

Maybe my offer of home-baked hamantaschen for Purim helped score me a dinner invitation. By the time we saw each other again, we had learned more about each other and found we had a lot in common, including being raised as Reform Jews. I brought hamentaschen and flowers.

That’s when we learned that we each shared our opposite-sex parent’s birthday—Dawn’s birthday was the same as my mother’s, May 10, and mine was the same as her father’s, November 3. That was certainly a coincidence if nothing else.

I knew we were beshert when we began to see each other more regularly, including a Passover Seder that she made for just the two of us.

We got engaged on Rosh Hashanah night, perhaps spurred on by the D’var Torah of the associate rabbi at our temple, Beth El Hebrew Congregation in Alexandria, Virginia. She talked that morning about taking chances and following one’s heart. It was not a thoroughly planned engagement (e.g., no ring). 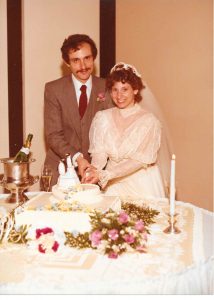 The newlyweds before cutting their wedding cake.

We got married at Beth El on Mothers’ Day In 1984. Now, 36-plus years later, we’re still members. To help complete the circle, our two younger daughters were both married there, too.

Maybe the birthday coincidence should have alerted us earlier that we were indeed beshert?

At a kibbutz in Upper Galilee, Israel on an Association of Reform Zionists of America (ARZA) tour, October 2015.

Jack and Dawn Kaye have three adult daughters, two sons-in-law, two granddaughters, and two grand-dogs. They are active Beth El volunteers. A former Brotherhood president and Religious School and Youth Committee chair, Jack is a 36-year employee of NASA, where he now runs its Earth Science research program. Dawn retired after working at AARP, Whitman-Walker Clinic, and the Jewish Social Service Agency in Fairfax. They live in Annandale, Virginia.