Almost every year since my earliest childhood, my family has gathered to watch the Thanksgiving Day parade from the living room window of my Aunt Marion and Uncle Maury’s apartment on Central Park West. In that living room, a large, blown-up vintage photograph hangs on the wall. It shows Maury, as a young man, standing on a picnic blanket on a grassy field, surrounded by similar blankets with groups of young people. It’s more than just a picture. It’s evidence of fate.

Shortly after Maury died this past summer at age 97, I asked Marion, whom I call my aunt, although she and my mother were actually first cousins, to retell the love story foretold in that photograph.

They met on a blind date in 1952. That’s how everyone met in those days, she says, sort of the equivalent of meeting online today. The guy who fixed them up was somebody she’d dated a few times who knew Maury from way back, from the city. The guy knew her through a friend from Fort Trumbull Beach, Connecticut, where her family spent their summers.

They went to dinner at a restaurant in Greenwich Village, where she ordered artichokes and then got irritated at herself, because “it was not the most graceful thing to be doing with my hands.” On their third date, she decided she wanted to marry him. The actual courtship was almost two years—he had just begun his law career at $30 a week, the standard starting salary for law in those days, and wanted to be set a bit better before they married, she says. His firm did mostly labor arbitration; among his first clients was a diaper service. When he and a partner formed their own firm, their clients were theater, art and literary luminaries. Going to parties and meeting famous people at first didn’t particularly excite Marion, who was a bit shy. (She came to enjoy it, though.) 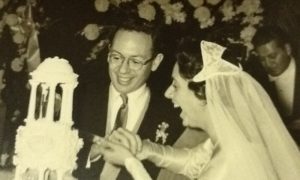 Some years after they got married, Marion and Maury were at his mother’s house, looking through some photos that had apparently been randomly tossed in a drawer. There was no order to them, it was just a drawer of unsorted pictures. Maury was looking at a photo of himself, standing alone, when he said, “Look, Marion. The girl sitting next to me has a dress like you used to have.” The dress was white plaid. Maury looked at the photo more closely and said, “This girl looks just like you.” Marion looked at the picture and realized: She was the girl.

“It was really quite amazing,” she says now. “He was standing completely by himself, and there was a blanket right next to him, and I was sitting on it, facing away from him, just a few feet away.”

The strangest part of the story: They didn’t meet that day. Their blind date wasn’t until three and a half years later.

They eventually figured out that the picture had been taken at a summer concert in Tanglewood, Massachusetts in 1948. He was there with a friend. She was there with friends from her Connecticut hometown. There must have been hundreds of people there. Their blankets were side-by-side.

She describes what happened when they found the picture:

“We certainly said that it feels like that was it, we were meant to be. It was our Beshert.” 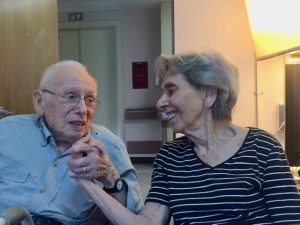 Amy E. Schwartz, Moment‘s opinion and book editor, grew up in New York City. Her aunt and uncle, Marion and Maurice Spanbock, were married for almost 67 years before Maury passed away in 2021. Before he retired, he was a celebrated lawyer whose practice encompassed Broadway and Hollywood celebrities. Marion taught preschool for a time. They raised their family in New York.

Top photo: It was Marion’s striking dress—she’s seated to the left of Maury, who is standing in the picture—that led the couple to realize they’d been inadvertently photographed together three and a half years before they met through a friend.