Beshert | The Crooner in the Station

Well, you tell me. Many years ago, when I had a job that often took me to New York, I was an Amtrak regular. This was back in the Dim Ages before both Acela speed trains and the Quiet Car. So you can bet that after three hours and twenty minutes of listening to a cacophony of conversations on 2G cell phones, I’d be in a pretty bad mood.

By the time I got to New York, I couldn’t wait to get off that train.

I still had to navigate the taxi line and a long ride in traffic to my hotel. Bedraggled, hungry and lifting my too-heavy overnight bag one laborious step at a time up the stairs to the main lobby, I felt claustrophobic and lead-footed in the throng.

Halfway up the stairs, I heard the most beautiful singing from above. Not heaven, the ticket hall.

The voice was male, euphonious and soulful. It was so magnificent that I started to feel my heart lift before I got to the top of the stairs. Emerging into the hall’s glare, I spotted the young man with his guitar. He was tall, slender, and wore a cowboy hat over dark hair. I guessed he was in his twenties. A small crowd had gathered around him. He was mesmerizing. I stayed for four songs, all original compositions. My stress was gone. I was in awe.

His friend stood nearby, next to a table of CDs, $10 each. I bought one. Simple graphics with his name and an exclamation mark: “DREW!” 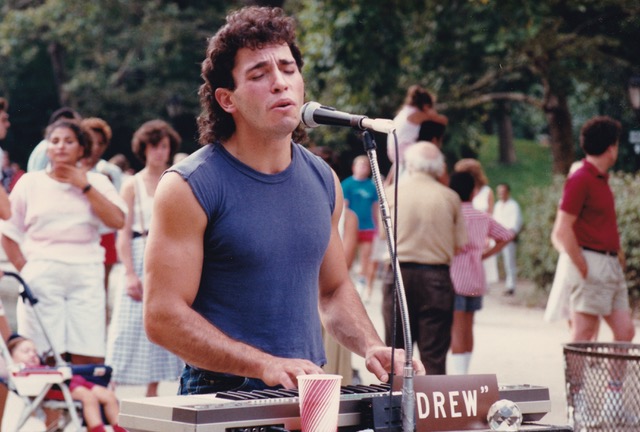 Deeply affected by his singing, I had to remind myself to get going. My serenity lasted until I had to think about work. But for many months, I played that CD over and over and marveled at the unknown busker’s voice singing his songs, feeling stress fall away as it had the day I ascended the stairs from the train platform to the higher level.

A year later, I was again in New York, this time for a family event. At breakfast in a diner with my aunt, uncle and mother, the talk turned to our relatives. My mother and aunt were catching up on news about their first cousins: were everyone’s kids giving them naches or aggravation?

“How’s Rhoda?” my mother asked. And my aunt replied, “Her son Drew sings in the subways and at train stations.”

That’s how I found out that Drew was my second cousin.

What to make of this? Was the coincidence beshert? To what end? Was there some kind of primal, blood or DNA attraction that led me to his music? Would I not have noticed and kept hurrying to the taxi line outside if we weren’t related?

I have no idea. And it’s not like we then connected in person and became besties. Didn’t happen.

But I’ve never been able to get this convergence of souls out of my mind. So, on June 29th of this year, I wrote this story, wondering, was this a beshert that hadn’t been given its due? On July 1, I casually asked my mother if she knew what had become of Cousin Rhoda’s singer son. She did. Drew had died on April 14, 2022 of undetermined causes, ten weeks before his 62nd birthday—on July 1.

Was all this a coincidence? It doesn’t matter. Beshert is strange magic in every form.

Today it’s a tribute to the music that moves us, that connects us as family—sometimes literally. Thank you, Drew Alan Kaufman, of blessed memory.

To listen to “Mi Vida,” recorded by Drew before he passed, click the play button below.

Pam Janis is Moment’s Beshert editor and an author, speechwriter and journalist in Washington, DC. Drew Kaufman made music in New York and Austin, Texas before he passed on April 14, 2022. Read how he delighted audiences in this New York Times article from 1987.

Moment thanks Drew’s brothers, Wayne and Reese Kaufman, for sharing his songs and photos. May his memory be a blessing.

5 thoughts on “Beshert | The Crooner in the Station”