Beshert | The Blessing was the Memory

My Jewish aunt was dying in a Catholic hospice. It was the fall of 2010 and her journey from Alzheimer’s to leukemia to hospice had been quick. Just a few weeks before, my cousin had noticed that her mother’s ankles had swelled. She took Aunt Stefanie to the E.R. and a blood test there shocked us all: nobody knew she was leukemic. She had never complained or even reported symptoms. Was she aware of them or had Alzheimer’s stolen her sense of her body, too? 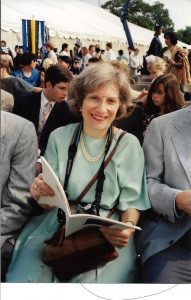 The hospice was in New York and my family traveled from Washington, DC to see her. The day she was transferred there by ambulance from the hospital, we were dismayed to find a cross hung on the wall over her bed. “Please, can that be removed?” we asked one of the Sisters. We explained that my aunt was Jewish.

The nun was quick to reassure us that all faiths were represented there and that there was a rabbi who visited with Jewish patients and conducted a weekly Shabbat service that they could watch from their beds on a closed-circuit TV channel. With great relief, we asked if we could speak with him. She said she would page him. When she told us his name, time stopped.

It had been 34 years since I’d seen him. The hospice rabbi was my college boyfriend’s roommate.

Beshert rushed at me, full-on. There was no doubt it was him; in college in Ohio, he was already planning to be a rabbi. We’d talked about it. My boyfriend wasn’t Jewish and between his roommate and his girlfriend, he had many questions for us. In their room on the top floor of their fraternity house, we chatted and the future rabbi played guitar. His mother once told him, “Who says life has to be fair?” We laughed at the dark in that. I’ve quoted her many times since.

The nun paged the rabbi. He was on his way up to my aunt’s room. As I waited in disbelief, I suddenly remembered that I’d stepped on this man in the lower bunk as I was climbing with his roommate into the upper one. Way to wreck a reverent moment.

Suddenly he was there in my aunt’s room with us. Hugs and tears. “I don’t know what to call you,” I said. “Are you Rabbi with your last name or are you Charlie?” He smiled and said, “Rabbi Charlie.”

Rabbi Charlie came to see Aunt Stefanie every day and say a prayer. On Fridays, he made sure her TV was tuned to the Shabbat service. We knew God was with her the whole time. She died a few weeks later.

Some days are made from “Who says life has to be fair?” Some days you get a bolt of beshert from the blue. 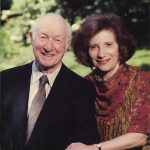 Pam Janis is Moment’s Beshert editor. Her aunt, Dr. Stefanie Halpern-Zevy, was a psychologist in White Plains, New York, until her death in 2010. She and her eldest niece shared a love of books, dark chocolate almond bark and the tendency to say, “Yay!” when things went wrong.

One thought on “Beshert | The Blessing was the Memory”