My husband and I joke that it’s lucky we met in the pre-internet Dark Ages. We never would have matched on a dating app.

Him: into action movies.
Me: chick flicks.

Him: an upstate conservative.
Me: a Manhattan liberal.

Him: mustache.
Me: I’d never dated anyone with facial hair.

Him: believed in Marie Kondo-ing everything (long before it was a thing).
Me: I come from a family of collectors who believes you can never have too many shoes, black tops and stuff. 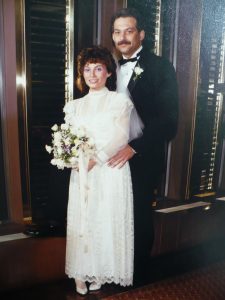 Thankfully, we met the old-fashioned way, at an ’80s singles mixer on a beautiful late summer evening under the twinkling lights at Central Park’s Tavern on the Green.

The party was organized by a group named “Dionysus,” for the god of wine and festivity. I’d been to a few of their events for recent college grads filled with preppy bankers in pink button-downs and rep ties and women in Lilly Pulitzer.

He stood out in his herringbone jacket, cowboy boots and Indiana Jones Stetson. My initial reaction: cute, nice, good dancer, but the gold chain was a little “too Jewish” for me (a 23-year-old who wasn’t looking for a husband).

I had given out my number twice that night, so I made it a hat-trick. I went out with the other guys once each. He got a second, third and decades more dates.

Somehow it worked. It’s amazing how love can bloom even without commonalities on paper (or screens).

Turns out he was a former journalist (I was and am still one). His corny sense of humor made me laugh. He was always up for an adventure. He would grab me to dance when a favorite song came on in the supermarket.

We both liked to ski, run, read time-travel novels and much more. Even with our differences, we realized that deep down we had much in common, including love of family and Jewish tradition. Of course, physical attraction doesn’t hurt.

Four years later we got married at Windows on the World.

We continue to try each other’s hobbies and find new shared interests. We debate politics from two sides of the aisle. We watch all kinds of movies.

He deep-sixed the gold chain early on. (I still wonder, what happened to it?)

We’re still going strong, two sons and 35 years later. It was beshert, even if the algorithms might not have agreed.

Bethany Kandel is a journalist, author of “The Expert Parent” and founder of www.BreastCancerFreebies.com, which finds free wigs, retreats, makeovers and resources for breast cancer patients and survivors. She and her husband, Gary Fishman, a financial relations consultant, live on Manhattan’s Upper West Side. Find her at bethanykandel.wordpress.com or @AwayWithBethany on Instagram.

One thought on “Beshert | My Un-dot.com Match”