In 2016, a library media specialist named Wendy Scalfaro from Syracuse, New York contacted me. We’d never met, but she had read Hello?, my first young adult (YA) novel, and wanted me to come speak at her school. When she couldn’t cover all my expenses, she hoped instead to arrange a book signing for me at a local bookstore.

Saying yes to something can literally alter your life.

It wasn’t an easy “yes” because my husband was freelancing then and clients didn’t always pay on time. We were stretched thin. I said yes anyway.

Fast-forward to April 4th, 2017. I have no other word to describe that day but “miraculous.”

Wendy had arranged for me to speak at an independent bookstore in Oswego, New York that day. The weather was horrendous. Torrential rain. The 45-minute drive became 90 minutes. I kept thinking, Why this bookstore? There had to be at least a dozen others that were more conveniently located.

I arrived in Oswego super early and planned to spend the afternoon before the event in a coffee shop. Unfortunately, the shop closed at 11 am. I keep kosher, so a restaurant wasn’t an option. My need for caffeine led me to a grocery store but the parking lot was flooded. I was wearing knitted Ugg boots and didn’t want to spend the next five hours with wet feet, so I decided to wait out the rain.

To pass the time, I went on Facebook, and that’s when I saw the headline in my news feed: two teens in upstate New York were refusing to do a school assignment about the Holocaust, a position paper where they had to support Nazi perspectives of exterminating Jews. I clicked on the link and, to my shock, the teens lived in Oswego. What were the chances? 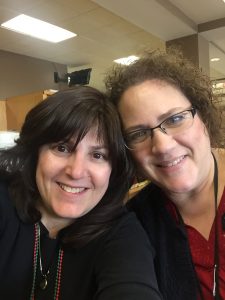 I read the story and then the comments. People actually supported of this assignment! I was horrified. And I was awestruck by the two brave teens, Jordan April and Archer Shurtliff. They were determined to have the assignment cancelled. (I later learned that of the 75 students in the course, they were the only two who pushed back—and that was in the five years the debate had been assigned.)

I had to meet these incredible teens. But I wasn’t speaking at any schools; it wouldn’t be possible. So, I thought I’d buy two copies of Hello? and ask the bookstore owner if he’d send them to Jordan and Archer with a note from me.

That’s not what happened. Instead, I took four steps into the bookstore, looked up and there was Jordan April.

“Oh, my goodness,” I exclaimed. “It’s the world-famous Jordan!” She looked at me and said, “How do you know who I am?” I showed her on my phone that I’d been reading all about her. I said, “I think what you did is amazing.” And she burst into tears.

The bookstore owner came over to me and whispered, “You have no idea how much this means for her to hear you say that.” That’s when I knew that this incredible series of events had happened for a reason. I had to write a book about Jordan and Archer and their protest.

Except I was through writing books. Just the night before, I’d received my 60th-plus rejection for a manuscript I’d spent six years working on. I was done. I saw it as a clear sign to give up on writing, especially another novel. That, however, wasn’t meant to be. I was meant to be in Oswego. I was meant to write my book, The Assignment.

The Assignment is Liza Wiemer’s fourth book. She writes a monthly kidlit column for The Wisconsin Jewish Chronicle and was named one of “The Top 100 People Positively Influencing Jewish Life, 2021” by The Algemeiner. A University of Wisconsin-Madison graduate, Liza lives in Milwaukee with her husband, Jim. They have two married sons and two grandchildren. Learn more about her and her work at lizawiemer.com

Top photo: Liza and Jordan April, who with her friend Archer Shurtliff inspired Liza’s YA novel, The Assignment, on April 4, 2017 at the River’s End Bookstore in Oswego, New York.

END_OF_DOCUMENT_TOKEN_TO_BE_REPLACED

Wildland: The Making of America’s Fury with Evan Osnos and Peter Osnos

END_OF_DOCUMENT_TOKEN_TO_BE_REPLACED

One thought on “Beshert | I Was Done Writing Books. I Thought.”