I met my husband 33 years ago at a party for a physicist I didn’t know. My neighbor invited me to increase the estrogen quota. I went for the pizza, not a partner. But I noticed David immediately.

I’d always dreamed of marrying someone who was good at math and science—if I ever had children who inherited my left brain, at least they’d have one parent to help with homework. A party full of physicists was a sure bet to meet such a someone. So, I was in the right place, but I was afraid to get my hopes up. When I felt a spark upon seeing David, I told myself it was a dust particle.

At age 26, I hadn’t had a romantic relationship since a college fling that flamed out after two weeks. (Years later, I had the last laugh watching “Sex in the City” and there he was, in a bit part as Charlotte’s worst blind date.)

To help me graduate from flings to adult relationships, I’d signed up for therapy. My therapist quickly connected my non-starter relationships with the sudden and inexplicable death of my father, a beloved Reform rabbi, when I was 13. I finally needed to face the truth of my loss. That freed me from having the kind of crushes that were okay for a young teen but not for an adult who wanted to marry and have a family. 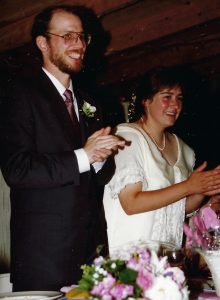 At Debby and David’s wedding, September 20, 1992 in Yarmouthport, Massachusetts.

Had I met David sooner, I wouldn’t have been ready. In fact, he reminded me later that we actually had met a few months before, chatting with mutual friends on the street. He wasn’t so easy to forget the second time around, even as I tried to fight the dust particle/spark.

Why did I fight it?

For starters, he had a beard. To quote my mother, “Never trust a man with a beard. You don’t know what he’s hiding.”

Also, I was pretty sure David wasn’t Jewish—a hunch he confirmed on our first date when he mentioned an uncle who was a minister. Dad had made it clear that I was expected to marry a Jew.

Then there was geography. I was born and raised in upstate New York and always planned to spend my life in the northeastern U.S. David is from western Canada.

None of this matched my picture of beshert.

Growing up means making your own choices. I chose my bearded, non-Jewish, Canadian smart guy. 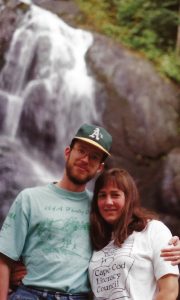 What I thought would be a brief stopover in his hometown of Edmonton 28 years ago turned into my life. I have dual citizenship. Our two kids are so Canadian that during the second Bush administration, viewing a portrait of George Washington, they asked why all U.S. presidents were named George.

Only the math and science part worked out as planned. Everything else about my beshert has been better.

Debby Waldman and David Wishart will celebrate their 28th wedding anniversary in September. They live in Edmonton, where Debby writes, works at a writing center at the University of Alberta, and teaches music at Temple Beth Ora, their Reform synagogue. David is a U of A. professor of Biological Sciences and Computing Science. They have two children, Elizabeth and Noah.

Top photo: The family at a friend’s wedding in Edmonton, July 2019.

2 thoughts on “Beshert | He Was Nothing Like I’d Pictured”