Beshert | Hanukkah at the White House

With Hanukkah’s early arrival this year, I’m reminded of my first and last White House Hanukkah celebration thirteen years ago.

I was lucky enough to join my daughter and her children, Ethan, 6, and Estee, 4, at the Obamas’ first Hanukkah party. Alison’s husband, Scott, was deployed in Bagdad at the time, and she was nursing a broken leg, so I went along to keep the children from being their rambunctious, active selves. There was just one problem: Ethan’s severe food aversions caused a massive nausea reaction. How would he cope with the unplanned foods that may be served?  Alison sought help from a child psychologist who had earlier advised that we simply keep him away from problem foods. That’s where I came in.

Alison represented Jewish military families by lighting the menorah and chanting the Hanukkah blessings. It was my job to keep the children happy and Ethan vomit-free so that she could enjoy a stressless evening.

It was a luminary-filled, standing room only crowd. The photos show then Vice President Biden standing right behind Alison, repeating the blessings with her. “I have Jewish grandchildren,” he told me later when I asked him about it. “I’ve tried to learn the prayers.” Following the ceremony, there was a traditional Hanukkah dinner. That’s where it got a little dicey. 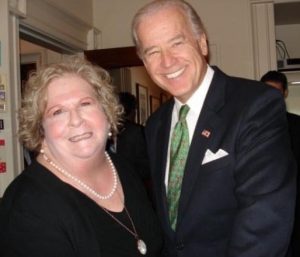 Marjorie with then Vice President Joe Biden at the party.

Ethan had developed his food aversions as a toddler. The sight, smell, or proximity to fruit and vegetables made him ill.  Not the polite, get-sick-in-your- mouth kind of upset. The type of full-throated, noisy, undeniable sort of event that even gives spectators a bit of momentary nausea.

At first, it seemed like a passing phase. We tried to ignore it. Nothing worked.  Each time he saw or smelled fruit, he’d run to the bathroom, heaving all the way. The psychologist explained that this hypersensitivity was his response to missing his dad during deployments. “It’s traumatic for military families to endure the loneliness and fear wrought by long separations,” she said. “Avoiding certain foods is Ethan’s way of managing scary feelings.”

As a small child, it was reasonably easy to keep the dreaded fruit and veggies out of sight and smelling range.

This was not an easy mission in a strange environment, least of all, the White House. So, before the party, Alison consulted with the psychologist again to advise us how to manage food landmines in a new setting.

The doctor had two great ideas. The first was to give him small wrapped candies to suck on if feeling queasy. The second was to put a small rubber ball, like the kind that comes with a paddle and string, in each pocket. “When you start feeling sick,” she told Ethan, “focus on squeezing them, and it will distract you.”

I was armed with wrapped candies and rubber balls. It was Alison’s night to mingle and shine. 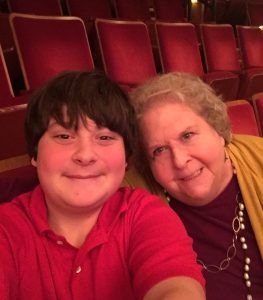 With grandson Ethan at the Kennedy Center in 2014.

Watching her with the Obamas and Bidens was surreal. The children looked like little angels, each lighting a candle, with the First Lady’s help. Tears welled in my eyes as I thought about my late father.  Alison stood proudly, just one generation removed from the Polish shtetl of his birth. “Only in America!” was his favorite saying, and it was coming in loud and clear in my head.

Giant fruit displays graced twelve-foot tables. I plucked some grapes and strawberries for Estee and me to hide from her brother. “This is going great,” I thought to myself. The kids happily munched away.

I used one eye for celebrity spotting and the other to birddog the kids. I noticed that angelic little Estee had a devilish twinkle in her eye. When Ethan looked away, she plopped two plump green grapes on his plate. It happened so fast that I couldn’t move them in time. As soon as he spotted the fruit, he started gagging.

I handed him a candy to suck on, but he was white as snow. His little body contorted as he tried to stifle the inevitable spasms. “MIMI,” he said in his outside voice, “I’m gonna throw up!” I grabbed his hand, and we started scouring the East Room for public bathrooms or at least, large planters. “No, No, No, you are not,” I told him, “We do not throw up at the White House.”

As we desperately looked for a receptacle, we pushed our way through clumps of Marquee names: celebrities, governors, Cabinet members. I suddenly remembered the therapist’s other idea. Over the din, I leaned down to Ethan to remind him. He couldn’t hear me.

So, I repeated, “Squeeze your balls, Ethan. Squeeze them really hard.” We were now circling the crowded room, unable to find a planter or even a wastebasket. Once again, louder to make sure he heard, I yelled, “ETHAN, SQUEEZE YOUR BALLS!”

Like a freeze-frame in a movie, everything stopped. The room got quiet. Awkward tittering was heard. It was a good couple of seconds before the noise resumed. Ethan and I burst out laughing. The crisis was over. We went back to the table, where Alison had joined Estee. “What’s going on?” Alison asked innocently. Estee looked stricken, thinking I might rat her out. “Oh nothing,” Ethan and I said, in unison. “We just took a little walk,” I added.

I’m proud to say that Ethan, Estee, and I have been dearest friends ever since. Alison and her children, who suffered through their dad’s seemingly endless deployment, got a night full of magic and wonder—a distraction they all desperately needed. I need not have worried so much, as the event played out perfectly and re-confirmed my belief in Beshert. It was all meant to be.

Marjorie Weidenfeld Buckholtz is a retired Federal employee after 30 years at the Environmental Protection Agency (EPA). She launched her writing career in her seventies and says, “I am just getting started.” Her work has appeared in Medium, Kveller, Tablet, Grands, Lilith, The Government Executive and The Birmingham News. When not writing, she constantly looks for ways to embarrass her now teen-aged grandchildren, Ethan and Esther. Ethan is a college freshman and has, for the most part, conquered his eating aversions. Esther, a junior in high school, still enjoys pranking him.

Top photo: The author and her grandchildren at the 2009 White House Hanukkah party.

If there’s one regional development that all Israelis love, it’s the Abraham Accords. Can Biden get the Saudis on board?

END_OF_DOCUMENT_TOKEN_TO_BE_REPLACED

As part of our Jewish Political Voices Project, Moment has been following 30 voters—3 from each of 10 battleground states—over the last 12 months as the political climate continued to shift and the pool of Democratic presidential candidates narrowed. As one of their final check-ins before casting their ballots, our voters shared their thoughts on the Trump and Biden campaigns, voting by mail and more.

END_OF_DOCUMENT_TOKEN_TO_BE_REPLACED

“In this age of pandemics and polarization, it may be hard to envision. But it’s not a mystery. Someone who prizes decency and embodies dignity. Someone who exercises empathy and exhibits patience and understanding. Someone who lives, breathes and acts on the basic beliefs which are unique to Jewish tradition and universal in application—to pursue justice, welcome the stranger, open your hand and your heart to the needy and love your neighbor.”

END_OF_DOCUMENT_TOKEN_TO_BE_REPLACED

The outcome of the platform debate over Israel will give Biden a good sense of how the party views the issue and where he may want to stand in order to avoid conflict with the base.

END_OF_DOCUMENT_TOKEN_TO_BE_REPLACED

Will We Vote by Mail Because of the Virus?

If people don’t feel safe going to the polling station, or if large gatherings and close contact are still deemed dangerous, why not allow all voters to fulfill their civic duty through the mail?

END_OF_DOCUMENT_TOKEN_TO_BE_REPLACED

What AIPAC and Super Tuesday Taught Us About the Presidential Race

Joe Biden, the comeback grandpa, had the best Super Tuesday anyone could have imagined. In fact, he performed so well, from solid wins in southern states, to surprise victories in Massachusetts and Minnesota, and an unbelievable upset in Texas, that some are already speculating that it’s all over and Biden is on a safe path to clinch the Democratic nomination.
There’s still a long road ahead, and if anything, Biden has proven time and again that he has a rare talent for ruinous missteps. But still, he is now the frontrunner in a narrowed-down Democratic field.

END_OF_DOCUMENT_TOKEN_TO_BE_REPLACED

In terms of the Jewish community, a Sander vs. Bloomberg match would be a moment of pride mixed with a fair amount of communal oy vey. The pride part is obvious. The oy vey relates to the not unreasonable concern over the rise of anti-Semitic stereotypes relating to either candidate. Clearly, pride overpowers concerns about haters just using this as another reason to hate, but the ride would be a tough one.