What else do unattached Jewish people do on Christmas Eve but go to a singles party? This divorced Jewish woman, however, wasn’t interested. I had just broken up with the guy I’d been dating, and the last thing I wanted to do was look for a new relationship. I needed to break up, not just with him but with dating. Period.

But when two of my single friends urged me to go to a JDate party with them that night for the 40-plus crowd, I figured it was better than sitting home and watching made-for-TV Christmas movies. 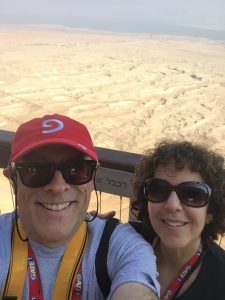 The turnout for the party was underwhelming. You’d have thought that Philly, a major metropolitan city, would attract more than a minyan times three of Jewish singles.

We three women parked ourselves in a corner booth, a feeble attempt to remain inconspicuous. I scanned the crowd, expecting to see the old (emphasis on “old”) familiar faces I’d seen on JDate. One guy in the crowd caught my eye and, despite myself, I wanted to meet the man behind the melt-your-heart Pepsodent smile. (Yes, I know that dates me. And not the kind of “dates” my friends were seeking that fateful night.)

Mr. Smile was standing and chatting with several other eligible bachelors. My friends and I decided to stand and mingle, too. We’re into Israeli folk dancing, and we found it interesting that the clusters of partygoers formed a large circle, as if they were about to break into a hora. 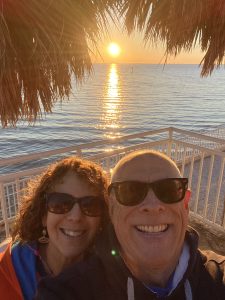 The couple in Florida, December 2021.

As I was making my way clockwise around the circle, Mr. Smile was making his way counterclockwise. At approximately 7 o’clock (on the circle, not the clock) we found ourselves shoulder to shoulder. We started talking and continued the conversation when he followed my friends and I to a private after-party across the river in New Jersey. The conversation continued on Christmas Day, when I met Mr. Smile in a Philly suburb for the obligatory movie and Chinese dinner. (I actually canceled another JDate date to go out with him.)

We discovered we had a lot in common: We both were divorced, had strong work ethics (he was in IT, I was in marketing) and had strong ties to Judaism.

A few months after we started dating, a blizzard hit the Northeast. The power went out in my condo; he was nice and toasty at his house. Despite the governors of both states declaring a state of emergency, Mr. Smile drove from New Jersey to Pennsylvania to “rescue” me. That’s when I knew he was my beshert.

While I don’t think my fortune cookie on our first date foretold of my future with Mr. Smile, we’re now celebrating our b’nai mitzvah (13 years since we met, nine years of marriage) and, yes, we’re still talking. Only later did we realize we had seen each other’s JDate profiles online, but we never “clicked” until we met in person.

The moral of this love story? Be careful about who you “pass over” in digital dating. You just might miss your beshert.

Darcy Grabenstein is a content marketer by day, and a freelance writer, social justice advocate, and Israeli dancer in her “free” time. Her poems have been published on Ritualwell and in other publications, and her essays have appeared in the Chicken Soup for the Soul series. She and Micah (aka “Mr. Smile”) were married in 2013 and live in South Jersey, where he is president of Temple Har Zion. With five grown children between them, they often refer to themselves as The Brady Bunch.

Top photo: Darcy and Micah Grabenstein were married at Shir Ami in Newtown, Pennsylvania on June 10, 2013.

JDate.com doesn’t call itself the “leading Jewish singles network” for nothing. The massive online matchmaker—which boasts 750,000 users and attracted major media buzz in April with its rebranding campaign, “Get Chosen”—is known as the go-to for Jewish online dating.

END_OF_DOCUMENT_TOKEN_TO_BE_REPLACED

Facebook Twitter Pinterest linkedin Telegram
We’ve all been there: the awkward first date.  He’s shy.  She’s nervous.  They wait for a table at a restaurant and try to make small t...