Dozens of young adults, most of them Scandinavian, were chattering animatedly in the lobby of the Hotel Snapir in Eilat shortly after sunset, after another toasty day on the beach. I sat in a vacant chair and pondered which restaurant I should patronize for dinner. 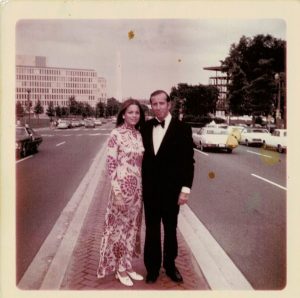 On their way to a Fourth of July party in DC in 1972, the couple paused with the Washington Monument in the background.

My eyes were soon drawn to the figure of a strikingly good-looking young woman, who had just descended the stairway and entered the lobby. I assumed that she was one of the Scandinavian crowd, but she didn’t mingle with the other guests. Instead, she sat down in a chair a few feet away from mine. She proceeded to spread open and scan the pages of an Israeli newspaper. How many Danes and Swedes can read Hebrew, I wondered, then, summoning up a little courage, I asked her the same question.  She laughed and replied that she was Israeli, a sabra, in fact.  And that was pretty much the extent of the conversation. I soon departed the lobby and contented myself with a falafel for dinner.

The next morning, I checked out of the hotel and walked almost a mile to the Eilat Airport. My month-long holiday in Israel was coming to a close. I’d come to Eilat for a few days of snorkeling and was now returning to Tel Aviv for the last four days. I sat down on a bench and opened a book, awaiting the boarding call for my flight.  Then I heard a female voice, a voice that seemed to be addressing me. “Hi, how are you today?” 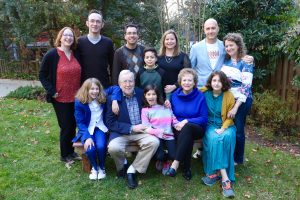 The family gathered at home in Bethesda, MD for Thanksgiving 2021.

It was, to my astonishment, the sabra from the hotel lobby. “Where are you going?” “Tel Aviv.” “Oh, you’ll enjoy Tel Aviv,” she said, “I’ll be returning there tomorrow, myself.”  This beautiful, engaging young woman had only come to the airport that day to buy a newspaper! I couldn’t believe she actually recalled briefly speaking with me at the hotel and was now initiating another conversation. I was immediately in love and knew she was my beshert.

Just then, I heard the announcement to board the aircraft.  There was no time to spare, so I abruptly asked her if she’d like to meet in Tel Aviv. She said yes and wrote down her phone number.

We spent three days together in Tel Aviv, married four months after that and, fifty years later, we are still together.

Elliot Wilner is a retired neurologist who now writes essays and short stories. Esther, his beshert, keeps up with Israeli literature and has volunteered for leadership roles at the couple’s synagogue, Congregation Beth El of Montgomery County in Bethesda, Maryland. Together, they enjoy world travel, including yearly trips to Israel, and weekly Shabbat dinners at home in Bethesda with their three grown daughters and four grandchildren.

Top photo: Esther and Elliot Wilner were married on June 18, 1972, at “Gan Oranim” in Tel Aviv. Esther had served as a sergeant in the Israeli army and worked at Tel Aviv’s Park Ha’Yarkon before she came to the US.

Dr. Alon Eliran is a member of CityTree, a Tel Aviv based knowledge center focused on forest cities, urban ecology and climate resilience.

END_OF_DOCUMENT_TOKEN_TO_BE_REPLACED

In the News, Israel, Latest

Whose Side Is the U.S. Really On?

END_OF_DOCUMENT_TOKEN_TO_BE_REPLACED

Facebook Twitter Pinterest linkedin Telegram
One of the cheesier keepsakes I’ve ever bought in Israel came, not surprisingly, from a touristy shop on Jerusalem’s Ben Yehuda Street....