It was 1970 and “Star Trek” had just ended on TV. Leonard Nimoy, who played Mr. Spock, the hybrid human-alien, had a young fan in the freshman girl who was a year behind me at our Chicago high school.

At school, I was in a theater group that rehearsed in the auditorium and band room. One day that spring, the freshman girl walked into the band room (she played French horn and percussion in the school’s concert band) and noticed the boy at the piano who, to her, bore a striking resemblance to Leonard Nimoy. She thought, “I need to find out who that is.” And so, she did. On the last day of school, she tracked me down and struck up a conversation.

Marguerite and Mike in 1971 at a mall photo booth in Skokie, IL.

Girls did not approach me out of the blue, so I assumed we had been classmates or something. We sat in the park outside the building for a while talking and then went our separate ways. I spent the whole summer trying to figure out who this person was.

When the next school year started, she acted like we were old friends, and gradually, so did I. Her name was Marguerite Hawley. Though I was pursuing other girls, all Jewish, she was the one who was always around—and the only one really interested in me.

After much agonizing on my part over the Jewish girls that didn’t want me, and the slow realization that here was a Christian girl who did, I decided to see where this might go. I went away for July and we corresponded. On August 7, 1971, we had our first actual date and our first kiss.

She felt we were beshert from the moment she saw me in the band room. I obviously took longer, but when I went off to the University of Illinois, I realized that being apart was not sustainable. At Thanksgiving break freshman year, I asked her to marry me.

At their wedding on January 5, 1975 in Lincolnwood, IL

She accepted and I gave her a ring. We told my parents, and I took the bus back to Champaign. My parents drove after me—to forbid me from marrying her. We sat in the dorm lobby arguing for hours. I literally told them not to make me choose between them and her because I would choose her. 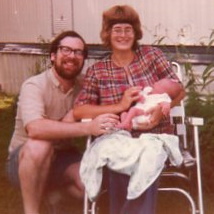 With daughter Miriam, three days old, in Urbana, IL in 1978

We ended up with a sort of compromise where we weren’t formally engaged; she stopped wearing my ring, but I didn’t take it back. We couldn’t get married right away anyway, because, at the time, Illinois law was that a man had to be 21 to marry without his parents’ permission.

We got formally engaged in the fall of 1974 when I proposed at a campus event where Star Trek’s creator and executive producer, Gene Roddenberry, screened the original pilot episode. Then the law was changed! I was still 20 on our wedding day, January 5, 1975, and didn’t need my parents’ signatures.

Seven years to the day of our first date later, Marguerite gave birth to our first child. Three years after that, she and our daughter became Jewish. 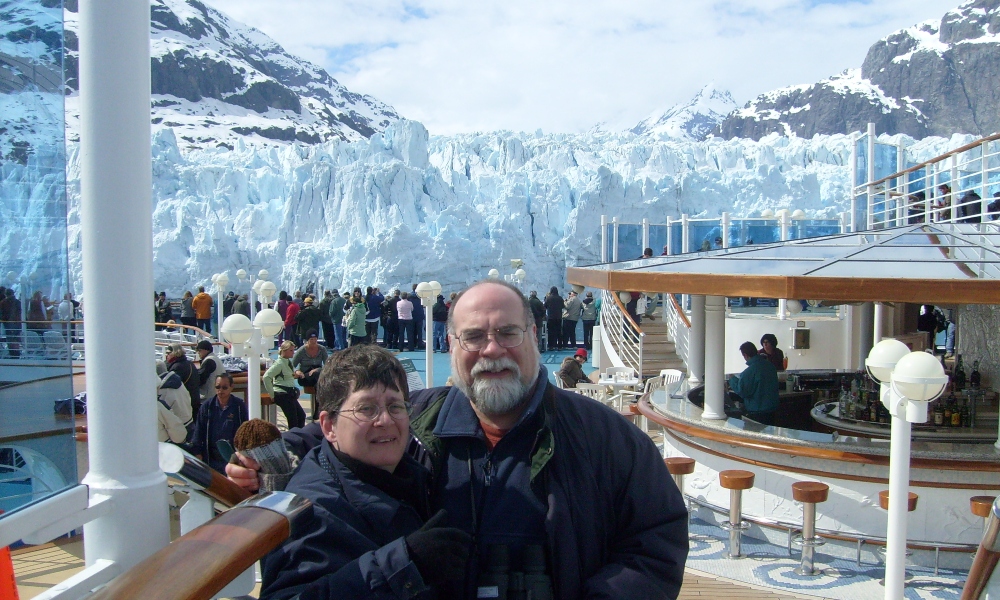 Mike and Marguerite on an Alaska Cruise in 2009

Michael and Marguerite Krause have been married more than 45 years. Mike is a computer programmer and data analyst. Marguerite is a musician, writer, and editor. Their children, Miriam and Matt, have given them the incomparable joys of being doting grandparents of two. They live in St. Louis Park, Minnesota and are members of Beth Jacob Congregation in Mendota Heights. Star Trek remains part of their lives.

Beshert | Inside Our Gates

Facebook Twitter Pinterest linkedin Telegram
Josh and I met in Jerusalem, just outside the Jaffa Gate. He was a tour guide before COVID-19 brought the tourist trade shuddering to a...

END_OF_DOCUMENT_TOKEN_TO_BE_REPLACED

Facebook Twitter Pinterest linkedin Telegram
I’ve always been super confident in most things but faltered when it came to dating and love. I was looking for ease and perfection. An...

END_OF_DOCUMENT_TOKEN_TO_BE_REPLACED

Beshert | Finding My Own Kind

Facebook Twitter Pinterest linkedin Telegram
My Grandma Phyllis always told me to “Stick to your own kind” when it came to dating. But to her disappointment, I’d never dated anothe...

END_OF_DOCUMENT_TOKEN_TO_BE_REPLACED

Beshert | A Face in the Crowd Led Me Home

Facebook Twitter Pinterest linkedin Telegram
At 26, I was coming off a traumatic divorce that led me to distrust everything I knew to be true in this world. Desperate to figure out...

END_OF_DOCUMENT_TOKEN_TO_BE_REPLACED

Beshert | This Isn’t What I Ordered

“I dreamed of certain outcomes. But it’s the ones I didn’t see coming that feel exactly right—beshert.”

END_OF_DOCUMENT_TOKEN_TO_BE_REPLACED

What does Dr Ruth, a 91-year-old sex therapist who seems to have done it all have to say to a 22-year-old who grew up with little to no sexual taboos?

END_OF_DOCUMENT_TOKEN_TO_BE_REPLACED

Beshert | The Song of Our Lives

Then I saw her. Across the crowded room. Dancing alone in a red dress. It wasn’t just her beauty. It was a spirit emanating from her being. I approached her and we talked a bit. I found out her name was Rusti. Enchanting. But she was swarmed by other boys—she was beautiful, talented and smart.

Nevertheless, when I returned to my fraternity house that night, I told my brothers that I would marry her. It was love at first sight.

END_OF_DOCUMENT_TOKEN_TO_BE_REPLACED

Beshert | He Had Me At Lunch

The man had just eaten the lunch of Jewish champions. There went my heart quandary; he embodied the simplest and best parts of being Jewish. With that one “lunch,” I realized he was the perfect Jew for me.

END_OF_DOCUMENT_TOKEN_TO_BE_REPLACED

That we met on February 22, my Grandma Clara’s birthday, my parents’ wedding day and my Bar Mitzvah day on my mom’s and dad’s 22nd anniversary, must be pure coincidence, right? We chose our wedding day, June 10th, randomly; it turned out to be my grandparents’ wedding day nearly 70 years earlier. Another coincidence… unless one accepts that beshert operates in strange and mysterious ways.