Beshert | Because I Wasn’t the Jazz Age

Had he known I was 20½ he would not have called me. George had a rule. He only dated women of legal drinking age so they could listen to jazz, his passion, in bars and clubs. But I was six months too young so instead of jazz, we had coffee and boysenberry pie at L.A.’s classic Du-Par’s diner on Ventura Blvd. 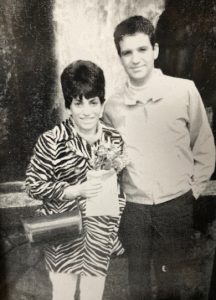 Our blind date came about because I attended what was then called Valley State College with another student named Ruth Lee. She told her mother, Sara Lee, no relation to the cake, that I played guitar and taught in a religious school. So did a work colleague’s roommate, George. When she asked me if it was okay that she give him my number, I said, “sure.”

We discovered over the pie and coffee that our lives paralleled five years apart. We both belonged to the same Jewish organizations (me: B’nai Brith Girls; him, the boy’s equivalent, AZA). We’d both been presidents of our organizations, gone to conservative synagogues and Jewish summer camps, where we became counselors, and our mothers had been Sisterhood presidents. All of this, even though he was from Portland, Oregon and I grew up in L.A.

I closed the door that night, and said out loud to myself, “He’s the ONE.”

That’s not even the beshert part of our story.

A month after we started dating, we went to visit George’s 93-year-old great aunt Ida. She could see the love we already had for each other. She told us that she had a sister named Fanny Lieberman from Minneapolis, who would visit her in L.A. during World War II. But Aunt Ida hadn’t had room for her so Fanny stayed with friends of her daughters. The couple Fanny stayed with, Myrle and Jack Zitch, were my great aunt and uncle. I was then Laurie Zitch and when George introduced me to Aunt Ida by my full name, she made the connection. 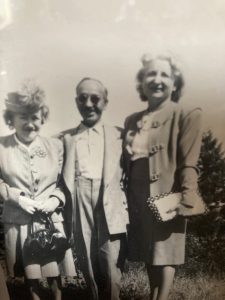 Their family connections in L.A., circa 1943. From left to right: George’s grandmother, Fanny Lieberman and Laurie’s great uncle and aunt, Jack Zitch and Myrle Zitch.

There was more beshert to come. When my parents moved from New York to L.A. after the war, Myrle and Jack found them a cottage behind one of Aunt Ida’s nephew’s. Her daughter, Harriet, would visit her cousin and stroll back to the cottage to visit my parents. Harriet was excited that my parents were pregnant. She told them about “a darling little girl” she knew named Laurie. My parents liked the name so much that they named me Laura and called me Laurie.

It turned out that George had met Myrle and Jack when he was a child. On a trip south from Portland, his family stopped in L.A. to see Aunt Ida and her daughters, who were cousins of George’s mother, Gladys. Myrle and Jack came over, and Aunt Myrle, who was a great story teller, told a joke. Seven-year-old George always remembered the lady with a big nose who made him laugh.

When we got engaged, Aunt Myrle and Uncle Jack had us over for dinner and presented George with a book about Palestine with the inscription: “To my dearest friends Myrle and Jack, with all my love, Fanny.”

Our families were intertwined before I was born.

I have worn Fanny Lieberman’s diamond in my wedding ring for 53 years.

Laura Fendel taught elementary school for 30 years and wrote two books for teachers of young children. She owned a national interior design franchise for eight years. Now a fabric artist and teacher of Mussar, Jewish Ethical Behavior, to seniors, she will also serve as an End of Life Doula. This work is especially important to her because George has survived a rare brain cancer three times in the last 20 years. “Miracles do happen,” Laura says. The couple live in Portland, OR. They are members of Congregation Neveh Shalom there, a 150-year-old synagogue to which George’s family has belonged since the early 1900s. They have three adult children and six grandchildren.

Top photo: George and Laurie celebrating 50 years of marriage in Portland, 2018. They were married on December 28, 1968 at Temple Beth Am in Los Angeles.

5 thoughts on “Beshert | Because I Wasn’t the Jazz Age”