Actually, it’s the very end of summer—Labor Day; the last night, the last party, the clock ticking toward last call. I have just turned 30. My weekend escapes to the Hamptons from sweltering Manhattan are about to come to a halt. But at 1:30 a.m., at a club called Scarlet’s, the night is still young.

He walks into the club, a tall, cute stranger with long hair, in a turquoise shirt, white jacket and white pants. He has a cool disco look—think John Travolta, Saturday Night Fever—remember, this is the 1980s. Our eyes meet. He averts his. I avert mine. The game is on. 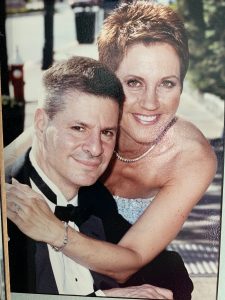 But he doesn’t approach. Is he shy? Not that interested? There’s only one way to find out. I ask the girlfriend I’m chatting with if we can move to a less crowded spot. She obliges, and though I see him continually stealing glances at us, he doesn’t come over.

We move again. No dice. Maybe he’s uncomfortable cutting in on our conversation? I excuse myself from my friend, and place myself alone at the bar. Slowly, he inches his way over asks me to dance.

We discover we were both raised in Queens and narrow it down to Forest Hills. We find we grew up five blocks apart.

I ask him what he does and he says it starts with a ‘d.’ I guess ditch digger. Wrong! (Doctor.) 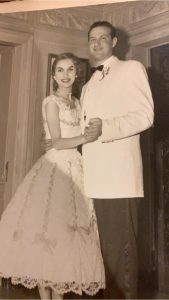 I can’t help but see the parallels in my parents’ beshert story. They, too, met at a dance in a Long Island beach town where my mom was spending summer weekends. My dad’s family lived there. My father dropped his sister off at the dance and decided to sneak in for a few minutes even though he didn’t have a ticket to attend. He’d say later that he spotted my mom across the room and that it was as if a light beam had descended and was shining down on her. He ran over to flirt and ask for her number (brazen!) and since she didn’t have a pen she jotted her number down with an eyebrow pencil. A year later, they were married.

My parents’ 62-year marriage was beautiful to behold. I am grateful for what they modeled: the bonds of deep love, humor, connection; their devotion through sickness and health. Even during mom’s horrible journey through Alzheimer’s, my father remained devotedly at her side. I hope our marriage continues to honor theirs.

Now, 35 years into it, I’m happy to report that while Marc and I can still do a mean hustle, the disco dancing has mostly morphed into waltzes and tangos. In retirement, we’ve taken up ballroom dancing. We no longer dance the night away; we much prefer afternoon dance socials— beshert may have first struck at 1:30 in the morning, but that’s now the middle of the night for us.

Newly retired from PR/writing work, Bari is trying to find the new post-pandemic normal with her husband of almost 34 years, Marc. Bari loves reading, writing, word puzzles, and learning new games, most recently, canasta and pickleball.  Most important is the time she spends with her three children and their significant others, and the latest adorable member of her family—her grandson, Choo Choo Charlie. The Adelmans live in Pine Brook, New Jersey.