“So, do you have a boyfriend?” my friend Rob asked.

It was our first year of law school and we were studying together in the library. It was an innocuous question, the breezy chit-chat of new acquaintances.

My eyes darted quickly to another classmate sitting alone on a nearby couch, book across his lap. David was a foot taller than me, with dark hair and several days’ worth of stubble. I’d noticed him the week before as he passed me in the hallway. We had every class together but had never spoken.

Yet for some reason, I didn’t want him to hear my response.

“I do,” I said quietly. “We’ve been together almost four years.”

A few minutes later, out of the corner of my eye, I saw David get up and leave. 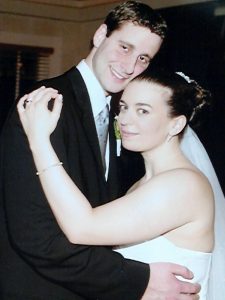 At their wedding, February 29, 2004. During non-leap years, they celebrate their anniversary on March 1st.

We spoke sporadically over the next two years. In one class, he sat at the end of my row. He’d occasionally linger after class, blocking my way out. I’d wait quietly until his friends told him to move so I could leave.

In our final year, we had a seminar together, which included off-campus externships. Mine and David’s were both on Fridays. When he asked me for a ride, I agreed—knowing it would double my commute time.

The first day of our externships, we later grabbed dinner at a diner and had our first real conversation. I told him about my boyfriend. I learned that my undergrad school had been his top choice, but he hadn’t gotten in. Our law school was his first choice and my last. I grew up in San Francisco’s Bay Area and am Catholic. He was from outside Chicago and was Jewish. He had cousins who lived near our school. 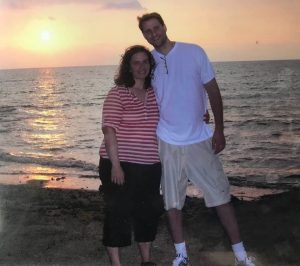 I was puzzled. I knew what night it was. “You’re not celebrating Rosh Hashanah with your cousins?” I asked. He said no.

At school on Monday, he told me he’d gotten home Friday night to a message from his cousin.

“Apparently, I had said I’d go to their house, but I completely forgot.”

Every Friday, I’d pick him up for work and then we’d have dinner. Two months into it, I told him the story of my friend Rob’s parents.

“His mom was engaged,” I explained. “But his dad said, ‘She’s not married yet!’ and pursued her anyway. She left her fiancé for him.” 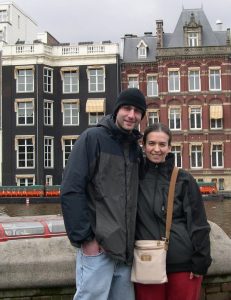 Then it came out: David had had a crush on me since our first class, when he zeroed in on “the cutest girl I’ve ever seen.” He’d left the library, devastated, when he heard me say I had a boyfriend. He moved seats in classes so he could see me and blocked my exit row hoping I’d talk to him. He’d planned to drop the seminar until I walked in.

I broke up with my boyfriend a few weeks later.

If he’d gotten into my college, if we’d spoken earlier in law school… I don’t think of the lost time we could have had; the events that finally did bring us together are what made us beshert.

David and I have been together 22 years and will celebrate our 18th wedding anniversary in 2022.

And I still have to remind him when it’s Rosh Hashanah.

Amy and David Newman graduated from Pepperdine Law School in 2000 and lived briefly in Chicago before moving to Alaska. They currently live in Anchorage with their daughters Julia and Gabrielle, both 13, cat Quincy, and golden retriever, Rocket. Amy is a freelance writer who also does contract legal research and writing for local attorneys. David is the state’s ADA Coordinator.

Top photo: Amy and David in Juneau, Alaska early in their relationship.

END_OF_DOCUMENT_TOKEN_TO_BE_REPLACED

Selihot, the pre-High Holidays service often held at midnight, has fallen on hard times recently. This new prayerbook aims to change that.

END_OF_DOCUMENT_TOKEN_TO_BE_REPLACED

It’s Rosh Hashanah, Did You Remember to Call Your Jewish Voters?

Following the tradition of speaking to Jewish communal leaders on the eve of the High Holidays, President Joe Biden made his first such call last Thursday.

END_OF_DOCUMENT_TOKEN_TO_BE_REPLACED

Rosh Hashanah in an Instant with Cookbook Author Paula Shoyer

Known as the “Kosher Baker,” Paula Shoyer goes beyond desserts in her new book, The Instant Pot Kosher Cookbook. Paula demonstrate how to prepare beet and quinoa salad as well as tzimmes, using an instant pot. Don’t have an instant pot? No worries! Paula also share how to make these dishes the traditional way. Perfect for prepping for the upcoming Jewish holidays.

END_OF_DOCUMENT_TOKEN_TO_BE_REPLACED

Accusations of treason, disloyalty and espionage are nothing new for the president. In the aftermath of the Ukraine call affair and the impeachment process triggered by it, Trump hurled these accusations at the whistleblower who first reported the issue, and at those who shared the information with the whistleblower.

END_OF_DOCUMENT_TOKEN_TO_BE_REPLACED

Why Do We Fall for the High Holiday Season?

Upcoming Jewish landmarks, such as Rosh Hashanah and Yom Kippur, are particularly conducive to this mindset of renewal. As the season approaches and the High Holidays near, we are prompted to consider our actions and outline steps to fix what needs amending.

END_OF_DOCUMENT_TOKEN_TO_BE_REPLACED

Is Intermarriage Good for the Jews?

The very meaning of intermarriage has shifted with these demographic changes. In earlier periods, intermarriage was generally seen as a rejection of Jewish identity and a form of rebellion against the community. These days, intermarriage doesn’t necessarily spell the end of an active Jewish life or of Jewish lineage.

END_OF_DOCUMENT_TOKEN_TO_BE_REPLACED

This Holiday Season, Our ‘Ask the Rabbis’ Editor Looks Back

With the High Holidays on the horizon—and with the current political climate in mind—we asked our “Ask the Rabbis” editor to reflect on some of her favorite pieces of rabbinical wisdom.

END_OF_DOCUMENT_TOKEN_TO_BE_REPLACED

Conservatives Admit Non-Jews—and No One Blinked

With only a few exceptions, the days are long gone when individuals are shunned by their communities and even disowned by their parents as a result of intermarriage.

END_OF_DOCUMENT_TOKEN_TO_BE_REPLACED

How “gentile” fell out of favor.