Beshert | A Mensch with an Edge

We met through a friend on July 4th, 1996. My friend Sheryl asked me to fireworks; her friend Cliff was saving spaces at Gasworks Park, a hilly green space abutting Seattle’s Lake Union that featured old-fashioned gasworks.

Saving spaces there on July 4th is a commitment and a half. The show doesn’t start until 10:15 pm.; to snag a premium spot, Seattleites line up at eight in the morning.

Sheryl said, “You and Cliff might really get along.”

At that point in my life, I pined over whichever guy in the corner of whichever party had long hair, a joint between his lips, and “I will ruin your life,” written all over him. I couldn’t have recognized beshert if it crawled out of Lake Union and bit me on the tusch—especially with the kind of mensch who would arrive to save space by 8 a.m. on a sleep-in holiday; hang out for hours so that friends didn’t have to show up until 5 p.m., and bring board games—Yahtzee, Backgammon, Battleship—to pass those hours.

When Cliff grinned at me with, “Anyone want to play Battleship?”, our matchmaker took a walk.

When he won, Cliff was sweet to the point of apologetic—what a cute chin he had!—and I liked that he didn’t hand me a fake victory. The morning after I met him, I biked to work with the summer sun inside me.

The following day, Cliff called to ask me out. We saw a Japanese film about a man in Greenland, there to complete the Buddhist death rituals for his parents. Throughout, he eats a great deal of puffin.

On our second date, making out in his backyard, he brought up the question of monogamy. I can’t tell you when I fell in love, but I do remember that when a friend said she was looking for “a mensch with an edge,” it struck me that the description suited Cliff exactly; a masculine-but-not-macho man who still liked Japanese films set in Greenland. Puffin notwithstanding.

We moved in together a year later. Another year passed. We discussed marriage. We bought rings. And then, I waited. My friend, Gary, said, “He’s got this all worked out. Besides, it’s the last decision he gets to make.”

It happened at yet another American fête: Memorial Day. During a break in The Big Jewish Show at Seattle’s annual Folklife Festival, Cliff took the stage in front of 600 Klezmer-hyped tribe members.

“Is Alle Hall in the house?”

Immediately, I left my body. Friends told me later that I peeped, “Here,” and raised my hand.

Cliff knelt to say, “Alle Hall, will you marry me?”

From behind me, I heard a male voice say, “That is one brave man.”

I sashayed to the stage and grabbed the mike “How could you do this to me? I look so schleppy!” (I did; some Batik schmatta and sneakers, for goodness’ sake.)

Cliff opened a velvet-lined leather box in which nestled a classic decoder ring, a mood ring, one with a fake gem the impossible color of watermelon candy, another with a faux-gold Roman coin, and still another with a plastic diamond the size of a golf ball. Also, our real ring. 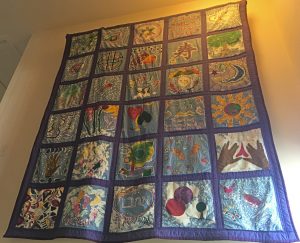 Alle and Cliff were married on July 4, 1999, in Seattle. Their chuppah, pictured here, was a large quilt of blue squares individually painted by friends, set against purple cloth.

We married three years to the date we met.

We brought Battleship to our wedding-night suite. We didn’t play.

Alle C. Hall and Cliff Meyer have been married for twenty-one years. They live in Seattle with their teenage children; the unit is known collectively as Hall/Meyer Nation. Cliff coached Little League and is PTSA co-president. Alle (pronounced like the lane: alley) has published in Dale Peck’s Evergreen Review, Another Chicago Magazine, Tupelo Quarterly, and Creative Nonfiction magazine, where parts of her Beshert originally appeared in her essay The Brass Ring in 2005. She blogs at About Childhood: Answers for Writers, Parents, and Former Children.

Jerusalem: A City Divided by Sound

Facebook Twitter Pinterest linkedin Telegram
It's just before 8 a.m. on a Shabbat morning in Jerusalem. At this early hour, the dry summer heat hasn't settled down on the city yet,...

END_OF_DOCUMENT_TOKEN_TO_BE_REPLACED

Facebook Twitter Pinterest linkedin Telegram
I’ve always been super confident in most things but faltered when it came to dating and love. I was looking for ease and perfection. An...

END_OF_DOCUMENT_TOKEN_TO_BE_REPLACED

Beshert | Finding My Own Kind

Facebook Twitter Pinterest linkedin Telegram
My Grandma Phyllis always told me to “Stick to your own kind” when it came to dating. But to her disappointment, I’d never dated anothe...

END_OF_DOCUMENT_TOKEN_TO_BE_REPLACED

Facebook Twitter Pinterest linkedin Telegram
“For every pot, there’s a cover.” That’s what my grandmother of blessed memory always said, never giving up her hope for me. But I was ...

END_OF_DOCUMENT_TOKEN_TO_BE_REPLACED

Beshert | A Face in the Crowd Led Me Home

Facebook Twitter Pinterest linkedin Telegram
At 26, I was coming off a traumatic divorce that led me to distrust everything I knew to be true in this world. Desperate to figure out...

END_OF_DOCUMENT_TOKEN_TO_BE_REPLACED

Facebook Twitter Pinterest linkedin Telegram
“Someday,” my boyfriend David said to me dreamily, “we’ll have Shabbat dinners at our house.”  “Yeah right,” I guffawed. “I guess yo...

END_OF_DOCUMENT_TOKEN_TO_BE_REPLACED

Beshert | The Song of Our Lives

Then I saw her. Across the crowded room. Dancing alone in a red dress. It wasn’t just her beauty. It was a spirit emanating from her being. I approached her and we talked a bit. I found out her name was Rusti. Enchanting. But she was swarmed by other boys—she was beautiful, talented and smart.

Nevertheless, when I returned to my fraternity house that night, I told my brothers that I would marry her. It was love at first sight.

END_OF_DOCUMENT_TOKEN_TO_BE_REPLACED

Beshert | He Had Me At Lunch

The man had just eaten the lunch of Jewish champions. There went my heart quandary; he embodied the simplest and best parts of being Jewish. With that one “lunch,” I realized he was the perfect Jew for me.

END_OF_DOCUMENT_TOKEN_TO_BE_REPLACED

That we met on February 22, my Grandma Clara’s birthday, my parents’ wedding day and my Bar Mitzvah day on my mom’s and dad’s 22nd anniversary, must be pure coincidence, right? We chose our wedding day, June 10th, randomly; it turned out to be my grandparents’ wedding day nearly 70 years earlier. Another coincidence… unless one accepts that beshert operates in strange and mysterious ways.

END_OF_DOCUMENT_TOKEN_TO_BE_REPLACED

Beshert | The Eight Months Of (Well, After) Hanukkah

Facebook Twitter Pinterest linkedin Telegram
I met Laurie at a Hanukkah party in Fort Collins, Colorado, a small town that had almost no other single Jews my age. Our mutual friend...

END_OF_DOCUMENT_TOKEN_TO_BE_REPLACED

3 thoughts on “Beshert | A Mensch with an Edge”