Twenty years ago, I fell in love with The Fiddler. You know who I mean, right? That ubiquitous guy on the roof?

The memory of our first encounter is so vivid that I can tell you exactly where I was and what I was doing the moment I recognized him.

It happened on a Saturday morning in Nice, France. My husband, Richard, and I were on a long-delayed vacation. We had spent most of Friday at the Marc Chagall Biblical Message Museum. I went in expecting to see flowers and birds and flying lovers, paintings that would be easy on the eyes and even easier on the brain. But what I actually found inside were soul-stirring images of Abraham welcoming three strangers, Jacob wrestling with the Angel, and Moses parting the Red Sea. On my way out, I stopped to buy a picture book at the gift shop. 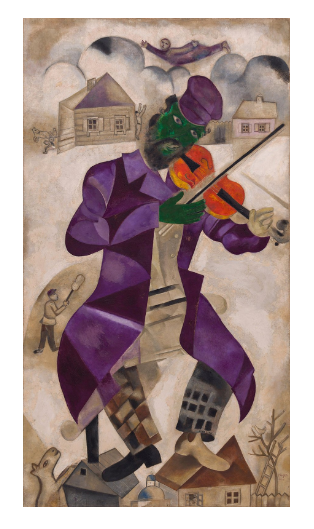 When I saw “The Green Violinist” in the book the next morning, I was so stunned that I literally cried out, “Oh my, God! It’s the Fiddler on the Roof!”

As I read about the painting, I fell deeper and deeper into Jewish sources until I was finally able to ground myself in Judaism’s most fundamental ritual—the reading of the Parshot. Every year, right after Sukkot, Jews all around the world begin reading the Torah anew, starting with the word bereshit (“In the beginning”). And every year, year-after-year, all the familiar stories take on new meanings. The words have stayed the same, of course, but each of us has changed in the interim.

Seeing that image changed me. I have now seen over 30 stage productions of Fiddler on the Roof. I take my seat, the lights go down, and suddenly the spotlight finds my beshert as he begins to play. And every time I hear his first notes, chills run up and down my spine. I’ve heard them throughout North America from West Palm Beach, Florida to Regina, Saskatchewan. 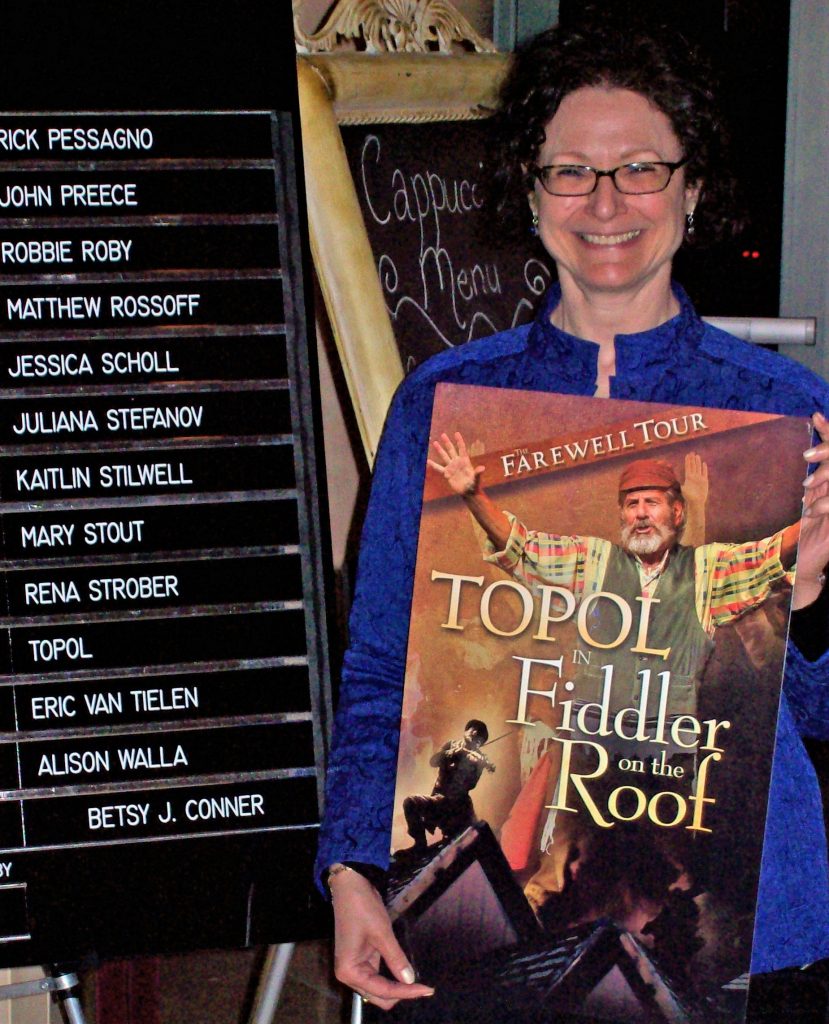 I’ve seen almost every famous Tevye except (probably) Zero Mostel—I’m not 100% sure of that because I was only 13 in 1964. Best Tevye ever? Probably Israeli actor Yehezkel Lazarov. He was fierce!

What I now understand is that engagement with a text is the essence of our tradition.

Jan Lisa Huttner served as both Story Consultant and “talking head” for the 2019 documentary Fiddler: A Miracle of Miracles. After 35 years in Chicago, she and husband Richard Bayard Miller now live in Brooklyn, New York, where they are members of Congregation B’ShERT, Beth Shalom v’Emeth Reform Temple. She is the author of three books, including Tevye’s Daughters: No Laughing Matter: The Women Behind the Story of Fiddler on the Roof, and the editor-in-chief of FF2 Media LLC.

Top Photo: 2009 at Congregation KAM Isaiah Israel, Chicago, presentation for Women’s History Month on Marie Waife-Goldberg, author of My Father Sholom Aleichem. Fiddler is based on his stories of Tevye the Dairyman.

Ten Musicals by Jewish Composers to Watch In Times of Quarantines

Enough of medical warnings. If you want to relax and keep happy at home, watching musicals is just the thing. Here are some selections by our favorite Jewish composers and lyricists, many of which are available to stream online; the songs also might be found on Spotify, Apple Music or other music streaming services.

END_OF_DOCUMENT_TOKEN_TO_BE_REPLACED

Facebook Twitter Pinterest linkedin Telegram
by Kara A. Kaufman It’s not every day that you see your own photograph in a newspaper, much less a Russian publication printed halfw...

END_OF_DOCUMENT_TOKEN_TO_BE_REPLACED

3 thoughts on “Beshert |“A Fiddler on the Roof. Sounds Crazy, No?””