A group of Jewish Zionist supporters gathered in Washington, DC on Friday to protest the DC Dyke March’s ban on Israeli flags and Pride flags with the Star of David in the middle. After assembling nearby, the group walked into the March together with their flags, where they were met by Jewish organizers and marshals from the DC Dyke March. They proceeded to engage in a debate about the flag policy, as well as the overarching symbolism of the Israeli flag and Pride flag with the Star of David. Ultimately, March organizers allowed Jewish Zionist supporters to march with the flag, but organizer Jill Raney repeated that it would “be inconsiderate to Palestinians” at the March.

Zioness, an organization which uses Zionism to motivate commitment to social action, along with the Jewish Community Relations Council of Greater Washington (JCRC) and A.J. Campbell, the former director of Nice Jewish Girls and founder of The Jacob’s Tent Project, arranged to gather before the DC Dyke March after hearing about the policy early last week. Campbell said, “we wanted to make sure that Jews who wanted to participate and fly the Jewish pride flag and wear Jewish symbols wouldn’t walk in alone. We find solidarity in numbers.”

At the meetup, Ann Lewis, a Zioness board member, described her shock when hearing about the policy. “I was stunned,” she said. “I remember [the] Chicago [Dyke March], and just when you think you’re beyond something it comes back.” Lewis also explained Zioness’s motivation to plan the meetup. “The answer is show up. Show up with all your values, show up with all your identities, show up and say I am proud of who I am and what I stand for,” she said. Regarding the policy itself, Lewis said that “the tortured rationalization about ‘this flag is all right and that is all right’ but not an Israeli flag, not a Jewish flag, that is very self-revealing.”

Over two dozen Jewish Zionist supporters attended the meetup. The group included members of the LGBTQ community and its supporters. Amanda Berman, founder and executive director of Zioness, said she feels “really grateful for the support of the national Jewish community and so many allies,” adding that she is “excited that people are willing and able to stand up whenever and wherever there is a call to stand both with the LGBTQ community, which is primarily what this is about, and also with the Jewish community.”

Attendees at the gathering said they decided to participate for a variety of reasons. Supporter Blake Flayton said that he believes in equality for both pro-Zionists as well as Palestinians. “Palestinian queer people should feel 100% welcome at Pride,” Flayton said. “That also means that Israeli people are 100% welcome at Pride.” He said that he does not conflate the Israeli flag with the Israeli government. “I don’t believe that the Israeli people are responsible for the actions of the Israeli government right now,” he said. “I think there’s a lot of queer Israelis and Jewish people who want to see change and want to address the Palestinian-Israeli conflict in a way that is progressive.”

Eve Strickberger, an incoming college freshman, said that she chose to attend the meetup and March because of her views as an intersectional feminist. “I think intersectionality includes Jews who are both pro-Israel and Jews who are not pro-Israel,” she said. “I am someone that is for equality and justice and rights for all people. I am pro-Israel and pro-Palestine, and I think it’s important to show up.”

Before entering the March, Berman addressed the protestors and instructed them to minimize any negative interactions. “It’s okay that people disagree,” she said. “The only thing that’s not okay is if people say that we’re not allowed to be there. Because we are allowed to be there, and we’re allowed to be there with all of our authentic selves.” Berman also expressed the “hope that they will accept us as we are, and as we come.” 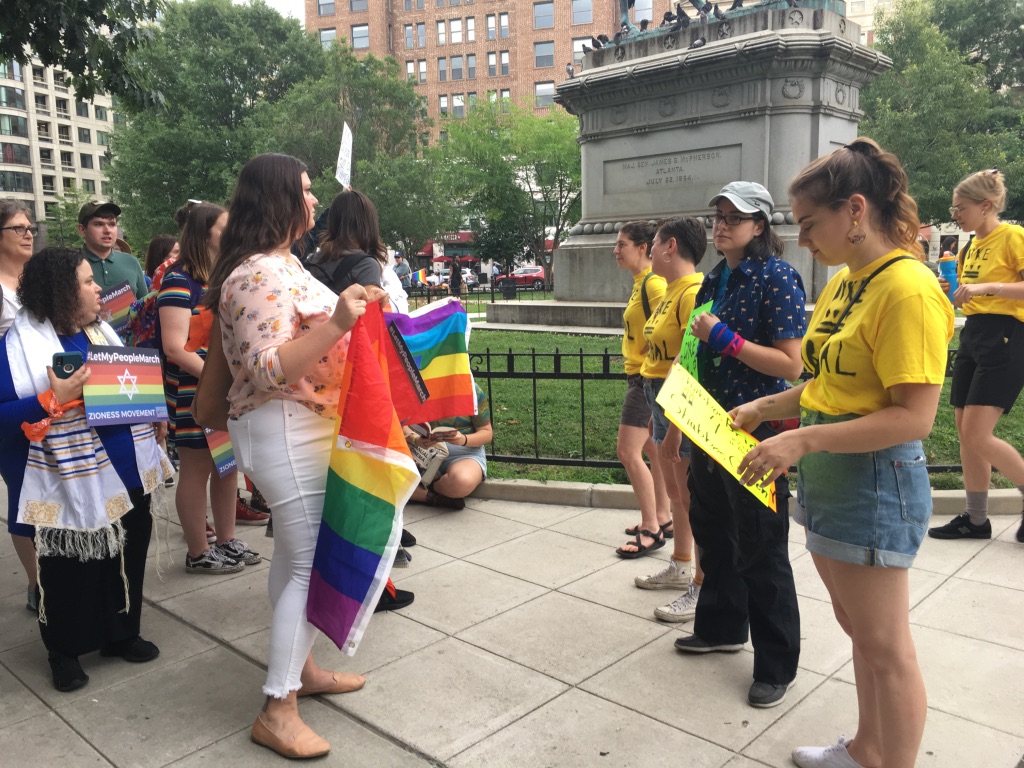 Police officers overseeing the DC Dyke March escorted the group to McPherson Square. Standing alongside the other Jewish group members, supporter Stephanie Black publicly confronted the March organizers about their policy: “To hold me personally accountable for what you perceive the State of Israel to do and not allow me to march in your March with this flag is anti-Semitic,” she said. Berman then told the March organizers that they were “creating a binary, in which the only way to be a dyke is to explicitly denounce the existence of the Jewish State.”

Jill Raney, a DC Dyke March organizer and member of IfNotNow DC, responded that due to the flags’ resemblance to the Israeli flag, the March was choosing to prohibit them in order to protect Palestinian marchers from nationalistic ideology. “We feel it’s very important in this shared space that we are here to be proud as Jewish dykes in ways that are respectful of Palestinian dykes,” they said. Raney clarified that other Star of David symbols were welcome at the March. “We’re just asking Jewish dykes to consider how some symbols of Jewish pride…might cause harm to Palestinian dykes at the March.” The March allowed Palestinian flags because, “at this space, [the flags] represent the hope for Palestinian freedom, not a specific government,” Raney explained. 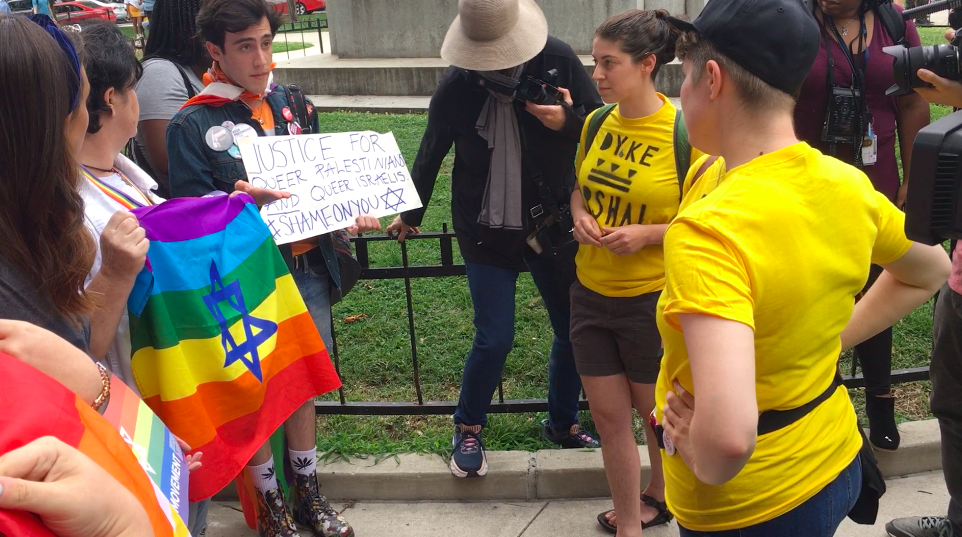 Jill Raney, A DC Dyke March organizer and member of IfNotNow, and Blake Flayton, a Jewish activist, debate the overarching symbolism of the Israeli flag and Pride flag with the Star of David.

Guila Franklin Siegel, associate director of the JCRC, responding to Raney’s explanation of the policy: “I think the delineation may be a little bit overly simplistic.” Siegel explained that the JCRC represents “a huge swath of the Jewish community,” including “people who spend all day thinking about how Zionism impacts Palestinians, and have spent their lives working to try and find peace.”

Addressing the Jewish Zionist supporters, Raney said: “I really appreciate all of the Jewish Dykes showing up in your wholeness today, and I am so appreciative of folks who are not themselves dykes who are here to be supportive of dykes,” referencing the March’s preference that allies observe rather than march in the Dyke March. At the end of the conversation, Raney stated, “I think there’s a lot of opportunity here for public conversation afterward about why when we encourage Jews to think about how Zionism effects Palestinians, people get so stressed out.”

While the DC Dyke March organizers allowed Jewish supporters to carry the Pride flag with the Star of David, many of the Jewish Zionist supporters did not complete the March because of a conflict with Pride Shabbat, an inclusive Shabbat service held the Friday night before the Pride parade. (The March, scheduled to begin at 5 p.m., did not start until 6 p.m.; Pride Shabbat began at 6:30 p.m.)

“Jewish dykes are welcome at Dyke March,” said Raney after the debate. “We’re just inviting folks to consider how a Jewish star centered in a very particular way in a flag looks like an Israeli flag. That’s all we’re asking.”

—with additional reporting by Dana Gerber

END_OF_DOCUMENT_TOKEN_TO_BE_REPLACED

Well before the start of the COVID-19 pandemic, Israeli artist Keren Goldstein created the art installation She’s Gone which features the clothing of Israeli murdered victims of intimate partner violence. Goldstein and She’s Gone co-director and designer Adi Levy, along with Rachel Louise Snyder, award-winning author of No Visible Bruises, are in conversation about why assaults against women have been recorded in greater numbers worldwide since the start of the pandemic, what can be done about it and how the exhibit She’s Gone is protesting the global phenomenon of gender-based murder performed by spouses and other family members. Dr. Shoshannah Frydman, Executive Director of the Shalom Task Force shares how the Jewish community is helping to combat and prevent domestic violence and available resources.

This program is sponsored by Moment Magazine and is in partnership with The Moment Gallery, Remember the Women Institute, She’s Gone, Strongin Collection and in cooperation with the Embassy of Israel.

END_OF_DOCUMENT_TOKEN_TO_BE_REPLACED

Groundswell is a solutions-based series of Q&As highlighting 10 grassroots Jewish changemakers confronting the climate crisis, coinciding with COP26 in Glasgow.

END_OF_DOCUMENT_TOKEN_TO_BE_REPLACED

Facebook Twitter Pinterest linkedin Telegram
When bikers, walkers and runners convene on Saturday at the Freedom to Vote Relay's finish line near the Capitol, one group will not be...

END_OF_DOCUMENT_TOKEN_TO_BE_REPLACED

“No Fear” Rally Against Antisemitism in D.C. Draws Over 2,500

Facebook Twitter Pinterest linkedin Telegram
More than 2,500 people showed up at the National Mall next to the U.S. Capitol in Washington, DC in solidarity against antisemitism Sun...

END_OF_DOCUMENT_TOKEN_TO_BE_REPLACED

Rallying Against Antisemitism (And the Politics Behind It)

The “No Fear” rally was designed to present a Jewish community united in its concern over recent spikes in attacks and in hatred directed at Jews.

END_OF_DOCUMENT_TOKEN_TO_BE_REPLACED

A Wide Open Conversation with Esther Wojcicki and Nadine Epstein

END_OF_DOCUMENT_TOKEN_TO_BE_REPLACED

The Woman Who Drove Old Dixie Down

Eileen Filler-Corn, Virginia’s first female—and first Jewish—Speaker of the House of Delegates, is playing a key role in dismantling the state’s Confederate legacy, statue by statute.