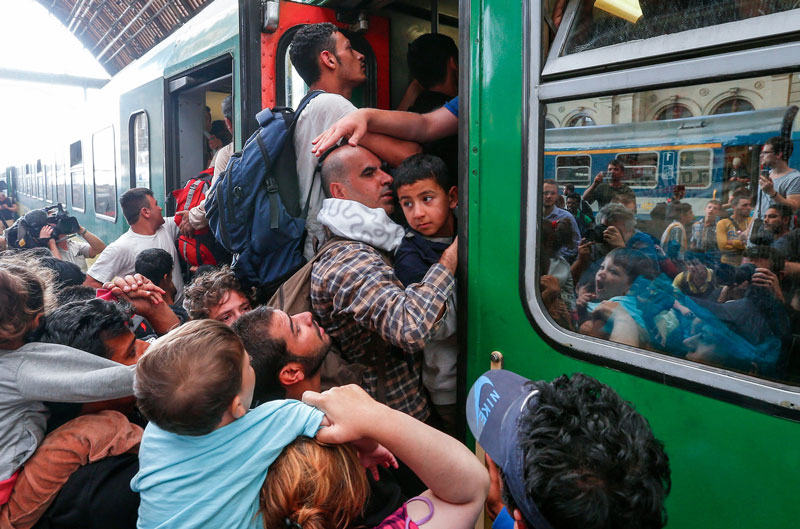 What is our responsibility as Jews toward Syrian refugees?

Offering refuge to those who flee circumstances of abuse is a fundamental principle of Torah. It was unquestionably revolutionary, especially in the period of history during which the Torah emerged. Harboring runaway slaves was a crime in 19th-century America. Yet more than 3,000 years earlier, Jewish law demanded it. You were obliged not only to offer refuge to runaway slaves but to set them up in your guest room and care for them (Deuteronomy 23:16-17).

The Torah also mandated Cities of Refuge: places where someone who killed unintentionally could flee and be safe from blood vengeance until they could be judicially vindicated—unheard of anywhere, even today. But in ancient Israel we had six actual cities set up across the land for this purpose alone (Numbers 35:11-15 and Joshua, Ch. 21).

The question of refuge for those fleeing Syria requires cautious consideration, for it is regrettable that the majority of the culture they represent has been reared on religiously inspired anti-Jewish slander and propaganda. Hundreds of Jewish women, men and children have suffered tragically and fatally at the hands of members of that culture, not to mention the current murders occurring right under our noses in the heart of Israel. We have an obligation by Jewish law to prevent endangerment to others, and we are culpable if we don’t (Talmud Bav’li, Sanhedrin 57a-b).

Who will speak up and who will remain silent? Who will lead the charge and who will test the winds before responding? Who will frame their pleas in Jewish-centric language—full of biblical quotes and allusions to our own familiar refugee history—and who will speak up with no need for these citations, since this is, after all, a tragic and devastating humanitarian crisis that transcends any one particular nation, group or religion?

I have to admit that I am bothered by the way the question is framed. Surely, our response to any tragedy of this magnitude ought to be driven by our instinctive human responsibility. What if, for example, we did not have a “Jewish parallel” from our memory bank to draw on? How many devastating floods or hurricanes have we literally experienced as a Jewish people? Should we sit those particular crises out? Of course not. We will and should respond because it is the right and humanitarian thing to do, and if it happens to have a Jewish proof text to “legitimize” the response, that is icing on the cake.

Fully 36 times, Torah calls us to help “the widow, the orphan, the poor, and the stranger.” Refugees of war-torn Syria, fleeing the violence of religious and tribal warfare, are all of these. As Jews, we must help: Jews bear history’s imprint of the homeless refugee and have been collective victims of political barbarism. For Jews not to help is to betray our history and miss a chance to redeem our own suffering: We are to love these people, for we were strangers in the land of Egypt (Deuteronomy 10:19).

It is doubly incumbent on Jews to aid our Syrian cousins. Who better to ease suffering brought by religious extremism than Jews, whom Syria’s warlords would murder if they could? What better vehicle for heart-healing and world-healing pluralism than for Jews, as Jews, to aid Syrians?

When Hagar and her son Ishmael were banished from the house of Abraham and Sarah to the wilderness, in danger of dying from thirst and looking for refuge, “God heard the voice of the boy” and saved their lives. The name “Hagar” contains the Hebrew word ger, which means a stranger, a sojourner—we might even say a “migrant.” Moses was also a ger when he fled for his life from Pharaoh and was taken in by a Midianite priest. He named his son “Gershom,” for, he said, “I have been a stranger in a foreign land.”

As Jews and as human beings, we have a sacred responsibility to the Syrian refugees and all refugees. We don’t have to go back to Egypt to remember that we have been in the same boat, so to speak. The St. Louis in 1939, carrying more than 900 Jews seeking refuge from Nazi Germany, was turned away from Cuba and the United States. More than 80 percent of Americans at that time opposed relaxing the immigration restrictions to save Jewish refugees facing almost certain death. Learning both from our Torah and our history, Jews should be at the forefront of advocating for the admission of Syrian refugees in the countries in which we live, and we should support our organizations such as the Joint Distribution Committee and others that have been leaders in this work.

“If I am only for myself, what am I?” These words of Hillel ring in my ears today as we consider the Jewish community’s responsibility to respond to the Syrian refugee crisis. This is not the first time we have faced this question. In the Cambodian and Vietnamese refugee crisis in the 1970s and 1980s, segments of the Jewish community joined together to sponsor and bring refugee families to their communities, providing support for years, even decades. We saw it as our responsibility to help the stranger and those in need, to offer a safe haven and home to those escaping danger.

Each morning, Jews around the world pray, “Praised are you, Adonai our God, Sovereign of the Universe, who lifts up the fallen.” As God’s partners in perfecting the world, we have an obligation to assist God in the work of lifting up those in need, aiding refugees who are in search of safety and new homes to call their own.

Jewish tradition makes it clear that we are obligated to help the downtrodden and those in danger. In addition to the biblical commandment to love the stranger, we know what it is like to be expelled from the place we called home. All four of my grandparents fled a hostile European environment to find a haven in America. As a result, we Jews should feel a special obligation to consider the refugees’ needs.

However, this obligation is not absolute. We are also commanded to remember Amalek’s surprise attacks. The Torah is clear that we must protect our material and physical security from Amalek and his descendants. The profound challenge to world Jewry is to determine whether these refugees are our enemies who have been taught to hate Israel and all Jews or innocent men, women and children who are trapped and seeking asylum. We cannot ignore the dire situation of innocent people, yet we must be careful not to put ourselves in harm’s way by allowing those who seek to destroy us to find asylum in our home. Jews should financially support humanitarian relief efforts for the Syrian refugees. Jews who live in countries where these refugees are attempting to find a home should support limited and careful efforts to shelter and care for those who have been vetted, particularly where children are involved.

Israel, which is still in a state of war with Syria, should not be expected to absorb any Syrian refugees. I am proud that Israel has offered humanitarian relief to those in need.

The Torah teaches that all humans are in the image of God and calls on us to repair the world to uphold their dignity and give them access to life’s necessities. In 1979, a quarter of a million boat people fled Vietnam. Israeli Prime Minister Menachem Begin cited the abandonment of Jewish refugees during the Shoah, and Israel was among the first countries to take in the refugees. This was a Kiddush HaShem—a sanctification of God’s name internationally.

If I were the prime minister of Israel, I would offer to take in a proportionate share of Syrian refugees—say, 5,000 to 10,000—and resettle them on the West Bank in Area C lands still controlled by Israel. This step would speak more powerfully than words as to Israel’s humanitarianism and its respect for all humans regardless of race, religion or nationality. It might well be opposed or even sabotaged by Arab groups. That would only make clearer to the whole world how, for a century, anti-Zionism and hatred of Jews have translated into policies that harm Arabs and degrade their societies.

What if the refugees return such kindness with hostility and anti-Israel activity? That is a risk worth taking as we search for future peaceful alternatives in the Middle East. It would parallel the current Israeli treatment of wounded Syrians in hospitals in northern Israel. This is being done without any guarantees because it is the right thing to do. I can’t help believing that the policy is having a positive impact on the Arab public as word gets around of Israel’s humane behavior in the midst of a maelstrom of civil war and cruelty.

After three generations post-Holocaust of asking our children rhetorically, “Where was the world when the nations shut their doors in our faces?” we certainly have a responsibility. Not to own up to it would be somewhere between irresponsible and hypocritical. That said, there’s nothing wrong with discharging responsibility responsibly. To throw open our doors willy-nilly without a plan of whom we can best serve, and how we can integrate them into America, is silly and ill-advised. We should differentiate between genuine refugees and migrants, with much more responsibility to the former than the latter. We have every right to protect ourselves from criminal and extreme religious elements that might be embedded within the populations we seek to welcome. Lastly, the idea of triage, both in saving lives and in charity, is not foreign to us as Jews. We have a set of principles that describe to whom our moral obligation directs us first, and who can best benefit from our largess when there are limited resources. I would argue on a number of counts that Jews should get behind giving priority treatment to persecuted Christian communities of Syria and Iraq, who will have no place to return to even if a political solution redraws the map of the Middle East.

When Chabad of Milan established Beteavon here in 2013, the first kosher soup kitchen in Italy, our goal was to provide hot, fresh and free kosher meals to those in need. I can’t say we knew that 1,000 refugees of war and poverty, many of them Muslims from Eritrea, Ethiopia, Sudan and Syria, would soon be pouring through our city daily. But since the influx began, we, together with the wider Jewish community of Milan, have thrown ourselves into sheltering and feeding these hungry and tired souls. Today, there are close to 50 African and Syrian refugees sheltered at Milan’s Holocaust memorial, eating fresh meals provided by Beteavon daily.

The religion or nationality of the refugees never crossed my mind. Helping people in need is something we simply need to do. Although there may be valid concerns about wider issues—the root of the crisis or risk of extremist infiltration—we choose to focus on what we can do to help unfortunate people in our city.

Conversely, many people like to join the latest cause célèbre, but the Jewish community needs to look into its own backyard as well. What has been done for Jewish refugees from Ukraine, or our own poor and needy brethren? We are happy to aid refugees passing through our city, and I believe it is a Jewish imperative to do so. But as we discuss aiding all those in need, we must never forget our fellow Jews who could benefit from some of our moral outrage—and help.