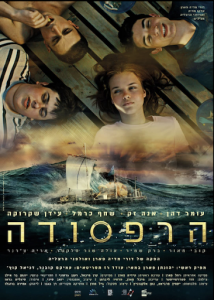 Director Oded Raz’s The Raft is a delightful drama suitable for all the family. While keeping his film gratifyingly devoid of sex and violence, Raz manages to inject plenty of excitement, along with some nerve-wracking scenes of adventure on the high seas.

The schoolboy best friends, Ido (Omer Dahan), Erez (Idan Shakroka) and Yoni (Shahaf Carmel)—along with Max, a pet white mouse, who plays a small but critical part in the plot—concoct a madcap plan to get to the game. Inspired by the Kon-Tiki expedition, a 1947 raft journey across the Pacific Ocean from South America to the Polynesian Islands, the teens’ version is a little less ambitious—aiming merely to get from Israel to Cyprus. Ido, whose recently deceased mother, Rona, was an accomplished sailor, has the necessary nautical skills to navigate such a vessel, but he is hesitant. Despite initially thinking it is “a stupid idea,” he is inevitably persuaded by Erez to change his mind, and the three friends start stealing items (a wheel, a sail, a mast, large water bottles) with which to construct their raft.

Enter a slice of romantic interest. Ido is in love with Sasha (Anna Zak), a stunningly beautiful Russian immigrant classmate who, as luck would have it, is also a fanatical Haifa soccer supporter. Sasha is an avid vlogger who produces regular online makeup tutorials. When she discovers the boys’ plan, she promises not to tell anyone on the condition she can film the raft’s construction. She keeps to her word, but wanting to continue her video project, she hides herself on the raft the night it sets sail and is only discovered once it is far out at sea—too late to make her disembark. Thus the scene is set for young love to blossom.

And then the real adventures begin. Plagued with assorted mishaps, the four teens have some tense disagreements, suffer a dangerous bout of food poisoning and endure a scary chance encounter with Lebanese fishermen after drifting off course. A DIY seafaring craft is, of course, death-defyingly unsafe, and the most dramatic scenes are shot during a ferocious storm that proves almost fatal for all four friends. Gripping sequences of the boys trying to take down the mast and sail, as well as the raft splitting in two, are guaranteed to have audiences on the edge of their seats.

Predictably, the adventurers’ respective parents are driven to distraction trying to locate the whereabouts of their rebellious children. This is made especially difficult given the false trail of clues left behind by the teens, including a fabricated story left on a computer leading the police to believe they are in the Israeli city of Eilat.

There are some lovely touches of humor in this wholesome, beautifully filmed coming-of-age adventure. And keep an eye out for Max the mouse, not exactly a natural mariner. But there will be no tears before bedtime among the younger audience members; Max somehow endures the terrors of the storm and mercifully is not lost to the waves.

Due to the requirements of filmmakers and distributors, the virtual viewing of some films is restricted to certain geographical areas. Restrictions vary but it is worth checking each film title on the internet. Most virtual films are only available for a few days.