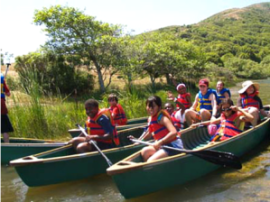 For centuries Jews have been the target of damaging stereotypes; yet in our effort to battle unfavorable myths, sometimes we overlook our own assumptions concerning the Jewish community. Perhaps this oversight is what makes Camp Be’chol Lashon so extraordinary. Located in the forested hills of Marin County—a short 35 miles north of San Francisco—the summer camp seeks to expand the borders of the Jewish community, to allow Jews of color to see themselves as an integral part of world Jewry. According to a New York Times article, Be’chol Lashon—which translates to “In Every Tongue”—has done in two short years what many Jewish communities have failed to accomplish: make the Jewishness of Jews of color a statement of fact, rather than a question. “If there’s Christians of all colors and all kinds, and Muslims of all colors and all kinds then why would Jewishness by any different?” explained Amalia Cymrot-Wu over a typical Shabbat lunch. The descendent of Brazilian and Chinese families, Amalia had helped lead the Torah service that morning. With help from her campmate Maya Campbell, who is half white and half black, she recited the b’rachah celebrating their place in the Jewish community: “Blessed are You, Adonai our G-d, Ruler of the Universe, who has made me a Jew.”

Although vibrant Jewish communities are scattered across the globe—from India to Ghana, Mexico to China—American Jewry has been dominated by its Eastern European majority since the early 20th century; it is their culture that has defined what it means to be Jewish in the United States, from the food we eat— latkes and gefilte fish—to the words we use—oy vey! Yet shortly after the turn of the century, demographers Gary and Diane Tobin determined that 10 percent of the six million American Jews are nonwhite; unlike many of their white peers, a large number of Jews of color have entered our community through conversion, adoption, and interracial parentage. The New York Times notes that other scholars have estimated the number of nonwhite Jews at approximately 450,000. Regardless, this is a significant numbers of Jews who do not see themselves in the self-generated archetypes of our community, even when being Jewish has nothing to do with skin color. Back at camp, Josh Rowen-Karen—born to black and Korean parents and adopted by an interracial Jewish couple in the Bay Area—emphasizes this fact. “Being Jewish isn’t looking a certain way,” he explains. “I could look at anyone and not know if they are or aren’t Jewish. You can’t know till you know the person.”

Camp Be’chol Lashon was born of the experience director Diane Tobin, who adopted her African-American son Jonah as an infant fourteen years prior. Raising Jonah in the Jewish community, she became concerned about how he would be accepted by his peers. “It was a sense of the Other, and we as a community are not great at dealing with the Other,” Tobin told the New York Times. “We had centuries of persecution making us wary. We have a tendency to be more suspicious than welcoming.” At the time of her husband’s death in 2009, the Tobin family had been hosting holy day gatherings and arranging retreats for multiracial Jewish families. This evolved in to Camp Be’chol Lashon, which kicked off last year with 18 children, ages 8 to 16. This year the number of campers has increased to 25, with children hailing from across the United States.

Perhaps the most surprising quality of Camp Be’chol Lashon is its sense of normalcy; the diversity of the campers is celebrated as an integral part of their Jewishness, rather than something that sets them apart. The kids attend services, make challah covers, play games, and spend a couple weeks in the woods, paralleling the summer activities of Jewish children across the country. Yet despite its common mission, Camp Be’chol Lashon helps remind us that Jewishness is not found in skin color, the curl in your hair, or the shape of your nose, but through community.