Home / Coronavirus / Zooming in on Jewish Practice After COVID-19 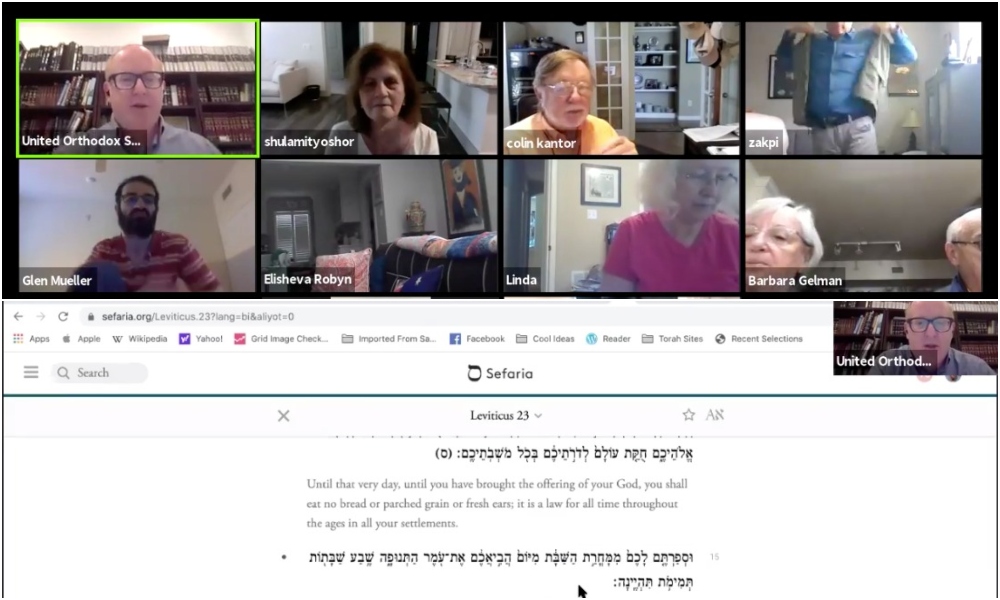 Fighting the mortal danger of COVID-19 might have posed an existential threat to the life of the Jewish people, were it not for the digital revolution. To fight the pandemic, Jews like everyone else have had to stay away from one another. But in God’s name Moses instructed the Israelites to assemble, to build a tabernacle in the wilderness to worship the God they had encountered. Following that precedent, as we have journeyed through the centuries of exile, oppression and periods of startling creativity, we have assembled, called our synagogues eydot, assemblies, of peace, of justice, of Israelites, of hope. There we have gathered to observe family rites: circumcisions, b’nei mitzvah, weddings, funerals; to pray; to observe the Sabbath, the festivals, the Days of Awe; to study and learn together; to laugh; to sing.

Suddenly a pandemic has forced us, as everyone else, to stay apart. How could we keep our mutual covenants? Indeed, how could we gather to do the ordinary business of an institution while remaining apart? Technology came to our rescue. Widely used in the business world, Jews in many communities began to live-stream religious events to home-bound congregants. But streaming is not joining; it is passive. When the pandemic came, overnight, many Jewish clergy and laymen learned to use Zoom, a technology that makes it possible to see and hear one another on a computer screen, to view a text, to hear a cantor chant, or a rabbi speak and occupy the entire screen of a computer, creating an intimacy impossible in a live gathering. At the same time, all participants can see live videos of themselves and others who have assembled one by one at their computers and even pass private messages to one another, or to everyone, under the radar. Intimacy can be enhanced further by moving one’s own “gallery” image next to the singer, speaker or text reader.

I was surprised at the impact. Even as an emerging adolescent and thereafter, I worked hard to understand the prayers and the readings from the Tanach (the Hebrew Bible). In later life I became a regular shul goer. Yet the Zoom experience significantly deepened and intensified my felt responses to the prayers, the passages and, at the shiva minyanim, the shared grief of families and friends of the one they had lost. My early learning, in fact, prepared me to accept the new forms of communal expression that fighting the coronavirus forced upon us. I learned to participate in Jewish life and learning in a religious school that taught that “Judaism,” the Jewish religion, did not spring from divine revelation but evolved over the millennia in response to the historical experience of the Jewish people, and the creative writing and teaching of rabbis, cantors and lay men and women. Will meeting by Zoom prove to be a momentary expedient, gone when the cursed COVID-19 departs, or a novel example of Judaism’s evolution?

Zoom and other forms of conference calls are likely to outlast the current pandemic as a medium for committee meetings and some regular classes because eliminating travel time would likely improve attendance and widen the field of congregants and staff who could participate. Similarly, where families are widely dispersed, as they are now, Zoom seders may persist because arranging to transport, feed and house everyone has become so costly in time and dollars that the advantages of meeting electronically may prove irresistible. But the differences between viewing a person or a group on a flat screen, and hearing them through speakers, and encountering them face to face are so profound that holding religious services and most religious, joyful or sorrowful family gatherings via the internet will likely end with the pandemic.

First, electronic meetings do not generate spontaneous exchanges such as small-group or one-on-one conversations while preparing meals, eating together or simply walking in or outside the walls of a meeting place. Gathering in person, whether at a seder, in a synagogue service or in a classroom is a collective enterprise that cannot be duplicated electronically. That is not just because of technological problems, such as the inevitable time lag between my speech and your hearing that prevents us from singing together, which we cannot in a Zoom meeting. Rather it’s because of fundamental, subtle characteristics of live gatherings. In life when we gather we have a collective experience that, though ephemeral, is very real and part of the warmth—or opposition—that ensues when we meet with others.

Second, in a Zoom gathering, each person is an avatar, rather than a living, breathing human being. A flat screen and a computer speaker cannot reproduce the subtleties of speech or capture an entire body, let alone simultaneously locate a person in a crowd and the crowd in a sacred space. Third, live gatherings generate intimacy; webinars enable only communication. That’s why rabbis and ministers responded with alacrity when the Governor of Maryland recently asked for suggestions about how safely to reopen churches and synagogues. Congregants, too, look forward to gathering in the natural way. It’s not just a hunger for “old-time religion.” Communities are the heart and soul of living religions. Technology may provide a short-term “fix.” It’s not a substitute.

Rabbi George B. Driesen is a senior scholar at Adat Shalom Reconstructionist Congregation and founding president of the Institute for Science and Judaism.