The Wisdom Project at Moment: Inspirational conversations with wise people who have been fortunate enough to live long lives.

This week’s conversation is with Martin Katz, 95, of Menlo Park, California.

Born in New York, Martin Katz moved to Palo Alto, California, in 1964 as a top pharmaceutical research executive with Syntex, a company that had moved from Mexico to the United States. Chemists in Mexico had been working on an oral contraceptive for women—”the “Pill” that would change the world. Katz was in charge of bringing it to market in the U.S. He is, as he likes to say, “the uncle of the birth control pill.”

The holder of more than 40 pharmaceutical patents, Katz also helped develop the non-steroidal anti-inflammatory drug naproxen, better known to headache sufferers as Aleve. He holds multiple advanced degrees in chemistry, pharmaceutical science and pharmacology from schools including Columbia University and the University of Sciences in Philadelphia. Following the tragedy of his son Barry’s suicide, Katz also began sculpting when he was 57. Initially he took classes at the Pacific Art League, but he also began attending sculpture workshops when he semi-retired in 1993. Now that he is fully retired at age 95, his works are primarily figurative, ranging from “very Realistic to Abstractive (not abstract),” he says.

Two of his major works are his bronze Moebius Loop Torah sculpture, which has two scrolls pointing upward, the parchment shaped in an infinite double twist, and Yizkor, three figures locked together in grief. Katz created Yizkor to honor his son; it has been featured in 9/11 remembrance exhibitions.

His wife of 66 years, Lee, of blessed memory, passed away in 2013. Besides his son, they have two daughters, Beth and Hallie. For the past eight years, he has shared his life with Gabriele Loosen, a watercolorist who worked for him at Syntex beginning in the 1970s.

How did you become “the uncle of the birth control pill?”

Three chemists in Mexico City developed the first molecules of norethindrone—a synthetic hormone similar to progesterone—in 1951. They held clinical trials in Puerto Rico in 1956. The company, Syntex, moved their headquarters from Mexico to the U.S. in 1960 and hired me. Here was this little bottle of steroid hormone that had to be converted into a tablet, manufactured, packaged and put through FDA approvals. That was my domain. So, the true father of the pill is the very renowned chemist Dr. Carl Djerassi, and I anointed myself its “uncle.”

Did you know it would change the world?

No! We were focused on getting this thing made! When we’d go out for beers, the discussion was primarily about what more sex would do for the country. Would it obliterate morality? Would people be fornicating in the streets, for crying out loud? We did not foresee how much it would empower women. We didn’t comprehend that at the time. And that’s been the pleasant surprise of my lifetime.

With the Supreme Court’s repeal of Roe v. Wade, how do you feel about the push in some states to make contraception harder to access?

I’m not in a position to talk about Roe v. Wade, except for the fact that I’m disgusted with the [politicians, legislators and judges] who are taking it away. But I don’t see how that relates to the oral contraceptive we introduced in 1964. The Pill was a much-needed product and people had a right to it. It did change the world, there’s no question. It gave women control of their lives. [Repealing] Roe v. Wade is a legalistic morass. It’s terrible. It’s horrible. It’s idiotic. We’re a country that’s going backward instead of forward.

What wisdom would you say you have acquired in life?

I have lived through four terrible tragedies in my life. Two suicides [my son and grandson]. Two deaths by automobile accidents of young children—all were under the age of 21. I’ve learned that there are three seven-year periods that one has to go through after a tragedy; it takes a biblical seven years to get through one stage to the next. You need to work to overcome grief. You don’t sit around feeling sorry for yourself. You’ve just got to go through it. That’s the toughest wisdom. Because of them, I am the sponsor of a study of suicide that’s being carried out at Ben-Gurion University.

How can people help others do the work of grieving?

If you see someone who is going through a bereavement, don’t try to run away or try to make believe it didn’t happen. Recognize it. Don’t avoid talking to them. And don’t say, “Oh, the weather’s nice today. Have you been to the bakery?” Their trouble is there with them.

How can mourners help themselves in times of grief?

I took up sculpture in 1984, as I was coming out of my son’s suicide in 1981. When I retired, I found even more new things to do. Now my and Gabriele’s mantra is, “If you don’t take a class, you’re not going to do it.” Time and time again, we encounter people who say things like, “Oh, I have some paints in the closet. I always wanted to paint.” Or, “I have some yarn sitting around. I always meant to knit.” Take a class!

We entrap ourselves saying we’re too busy and too busy, then suddenly we’re not. I see too many men walking in supermarkets following their wives around with the cart.

What  is it about classes that helps?

So, those are my two lessons in wisdom. Number one, grief, and number two, craft.

Have any of your beliefs changed with age?

I used to believe that most people in the world were good and wanted good things for people, and were conscientious and had consciences and wanted to help people. Unfortunately, in the last five years of politics in the United States, I’ve become rather embittered with people who are narcissistic, only concerned with their pocketbooks and don’t give a damn for anybody else.

How can there be somebody in the world today who’s against a vaccination? What is in their warped mind? I mean just that alone!

I would say to never stop learning. If I haven’t learned something new every day, it’s been a wasted day. I can’t miss a day at my age.

What do you want to do for the rest of your life?

I’m having lots of fun doing sculpture; the research, learning new techniques. Learning things from television and online. YouTube is fantastic. You’ve got a university at your fingertips!

What have you observed about people over your lifetime?

Is there a problem right now that science can fix?

You name me a world problem that can’t benefit from contraception. We have too many things coming at us and each and every one of them is attributable to too many people: climate change, air and water pollution, food and water shortages, depletion of natural resources… all this from too many people. We have to be able to educate everyone. We need more resources for everyone. I am the uncle of the pill that could help solve the problem. Take the damn pill! 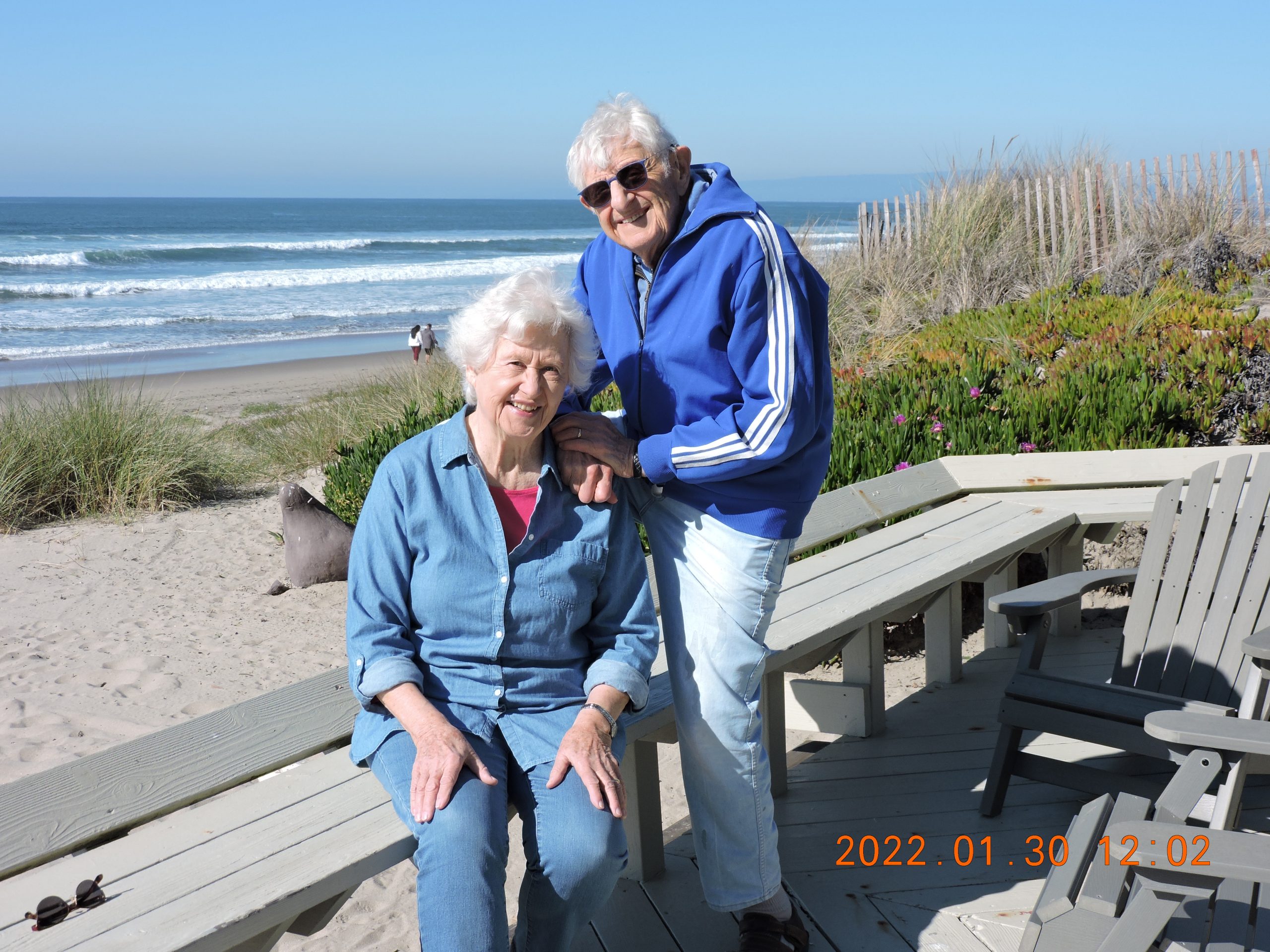 Martin Katz with his partner Gabrielle in 2022.

END_OF_DOCUMENT_TOKEN_TO_BE_REPLACED

At age 98, Ted Comet has served the global Jewish community for more than 70 years. He has no plans to stop.

END_OF_DOCUMENT_TOKEN_TO_BE_REPLACED

Nothing dampens the spirit of artist Aribert (Ari) Munzner, not even the 1,000 gallons of water that Minneapolis firefighters employed to extinguish the blaze that wrecked his art studio.

END_OF_DOCUMENT_TOKEN_TO_BE_REPLACED

Joan Gross Scheuer, a retired economist and education champion, is a pioneer in remedying inequality in public schools.