Home / Israel / What Would A Bernie-Bloomberg Match Look Like? 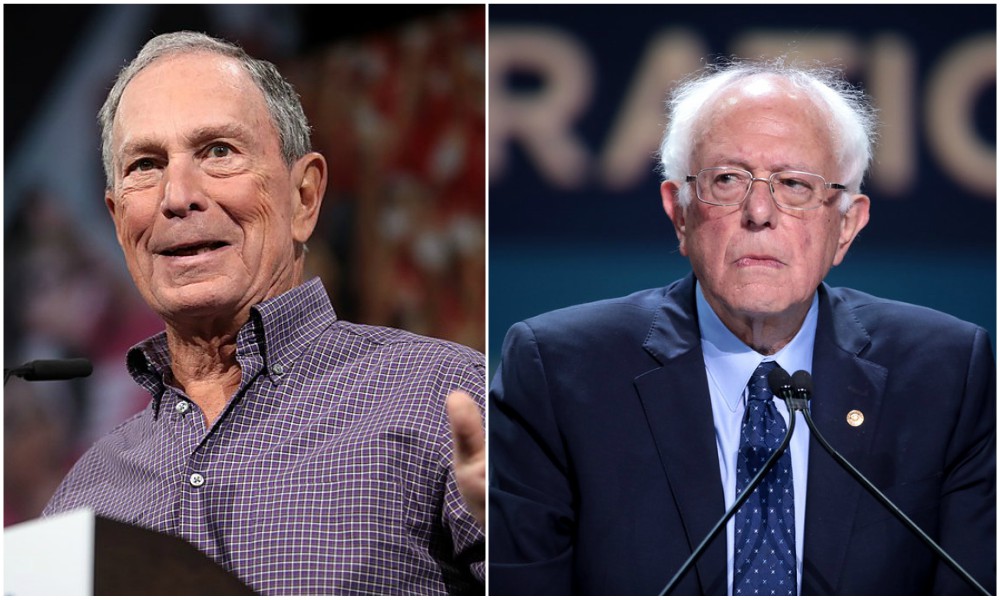 Jewish politics from the nation’s capital.
Sign up here to get DC Dispatch delivered to your inbox every Monday.

1.  In the Democratic primaries, it’s Jews vs. Jew vs. Jew

As Democrats move ahead with their lengthy process of choosing a presidential nominee, some questions cannot be avoided by American Jews, even by those who don’t believe every world event should be judged by whether it is “good for the Jews.”

There are two main issues on the community’s radar, both involving the frontrunner: Bernie Sanders.

First is the looming possibility of the Democratic race boiling down to two Jewish candidates: Sanders and Mike Bloomberg. As Joe Biden’s campaign continuously declines, it is not impossible that Bloomberg, the billionaire former New York mayor, will emerge as leader of the centrist pack, or at least as a strong contender.

Sanders and Bloomberg represent, of course, the two bookends of Jewish American politics–the old-time Jewish democratic socialist and the successful Jewish businessman. In terms of party politics, this is a choice that reflects the different forces pulling the Democratic Party in opposite directions. It is a chance for Dems to debate, fight and vote over the future path of their party.

In terms of the Jewish community, a Sanders vs. Bloomberg match would be a moment of pride mixed with a fair amount of communal oy vey. The pride part is obvious. The oy vey relates to the not unreasonable concern over the rise of anti-Semitic stereotypes relating to either candidate. Clearly, pride overpowers concerns about haters just using this as another reason to hate, but the ride would be a tough one.

The Democratic Majority for Israel (DMFI), a pro-Israel PAC spending six-figure sums on ad campaigns, has Sanders in its crosshairs. The group doesn’t agree with Bernie’s criticism of Israeli policies toward the Palestinians, but its ads, first aired in Iowa and now in Nevada, focus on his electability and his personal health condition.

The dovish lobby J Street, which did not endorse Sanders but supports many of his views on Israel, has called on DMFI to stop attacking Bernie. “DMFI has every right to publicly criticize the views of any candidate or elected official. But it has no right to claim to speak for a ‘Democratic majority’ of pro-Israel Americans as it takes sides in the Democratic primary,” J Street claimed.

DMFI’s founder Mark Mellman said in response that his group is “explicitly committed to advancing the interests of the Democratic party and to defeating Donald Trump” and that it has issues with Sanders’ views on Israel and his refusal to disassociate himself from anti-Semitic statements made by some of his supporters.

2. Does this in-fighting matter at all?

Well, yes. Because just as the battle between socialist Sanders and billionaire Bloomberg represents the bigger debate over the soul of the Democratic Party, the quarrel between Sanders and the pro-Israel PAC is a manifestation of the struggle to shape a new Democratic stance toward Israel.

DMFI’s attack ads against Sanders may or may not end up being an important factor in Sanders’ success or lack thereof in winning the party’s nomination. But this open, fierce and not-so-pretty-to-watch debate will help bring to the forefront the discussion tearing apart the Democratic camp, and it may eventually help shape a new consensus for the party, which can no longer ignore its internal fissure over Israel.

For better or worse, AIPAC, short for the American Israel Public Affairs Committee, the largest and most recognized pro-Israel advocacy group, found itself in the middle of the Democratic debate over Israel.

With the group’s annual policy conference just around the corner, candidates are being pressed on whether or not they’ll attend. Elizabeth Warren said she won’t, Bernie said he has nothing against attending, and Pete Buttigieg said he has scheduling issues (which, quite frankly, all the candidates have since AIPAC’s conference coincides with Super Tuesday) and Biden stood out in saying that he will attend.

Tonight, Elizabeth Warren nodded along and smiled as a questioner slandered AIPAC as “an unholy alliance” of “Islamophobes,” “anti-semites, and white nationalists” that perpetuates “bigotry”

Without blinking, Warren then agreed to boycott next year’s AIPAC conference pic.twitter.com/U2MJ6DCTdZ

NEW: “I haven’t made any scheduling decisions about that…I don’t even know when it is.” – @PeteButtigieg when asked if he will join @ewarren and #SkipAIPAC.

This guy doesn’t even know when your — er, @AIPAC‘s — Conference is 😉 pic.twitter.com/KbXPeIlg8O

But there’s more to Joe’s response.

Asked by an IfNotNow activist about the issue, Biden, who has been to numerous AIPAC events, said he would not boycott the conference, but that he would go there to “convince them to change their position.” Just about ready to board his bus, Biden was asked again about the issue and how he intends to convince AIPAC conference participants to support the Iran nuclear deal. The former vice president responded: “The way I did before when I made sure we got the deal done with Arafat.”

BREAKING: @JoeBiden refuses to #SkipAIPAC.
Instead he’s going to “convince them to change their position.”

Biden’s strategy that he’ll change AIPAC with a speech is as laughable & dangerous as his belief that he will be able to work with McConnell on bipartisan legislation. pic.twitter.com/VU4mgmKYAn

Yesterday, after being asked by an IfNotNow member in NV how he’s going to convince @AIPAC to change their agenda, @JoeBiden answered the same way he helped with “the deal with Arafat” pic.twitter.com/Tk21SIPhTu

So, to sum it up: Biden wants to go to AIPAC, he’s going there to convince them they’re wrong, and, for some reason, AIPAC people remind him of Yasser Arafat.

The Republican Jewish Coalition (RJC) was having a field day last week over a video of J Street president Jeremy Ben-Ami embracing Palestinian Authority President Mahmoud Abbas and giving him the customary Middle Eastern two kisses, one on each cheek. The meeting took place last Tuesday at the New York Grand Hyatt hotel, when Abbas dropped by to meet and share a press conference (well, not really a press conference, as he wouldn’t take reporters’ questions) with former Israeli Prime Minister Ehud Olmert. Olmert was in town for several speaking engagements, including one with J Street leaders.

“That is J Street’s president, Jeremy Ben-Ami, kissing Mahmoud Abbas, the Palestinian Authority leader—now in the 15th year of his 4-year term in office—who has made a career of funding the terrorist murders of Israelis and Americans,” an RJC petition based on the video reads. “Ben-Ami should be standing up for the hundreds of Jews that Abbas has ordered killed, instead of embracing him.”

Abbas was elected for four years and has since refused to hold new elections (though he’s clearly not the only Arab leader with a questionable approach to democracy; think of el-Sisi in Egypt or the Saudi royal family. No one in the pro-Israel world seems to have a problem meeting them.)

Under Abbas, the Palestinian Authority maintained the practice of paying salaries and benefits to prisoners and their families, including those convicted of carrying out terrorist attacks against Israelis and American citizens.

But to the point of questioning the legitimacy of meeting with the Palestinian leader—here it gets murkier. Abbas has met with all American presidents (including Trump), with all Israeli prime ministers (including Benjamin Netanyahu) and with American lawmakers (even on trips organized by AIPAC’s sister organization the American Israel Education Foundation.)

At the end of the day, it’s a question of optics, not of facts. And Ben-Ami’s embrace of Abu Mazen played straight into the hands of Republican Jews and other right-wing activists in the pro-Israel Jewish scene, who wish to equate Abbas with terrorism and J Street with Abbas. For their supporters on the left, it remains a no-brainer: a meeting with a leader all Israeli governments viewed as a legitimate leader and who has maintained robust security cooperation with the Israeli military.

5. Caucusing on Shabbat in Nevada

Nevada’s caucuses are scheduled for February 22 at noon, or in other words, midday Saturday, which is somewhat of an inconvenience for many Jews who attend synagogue, and a real problem for Orthodox Jews who do not drive on the Sabbath. With a Jewish population estimated at 76,000, Nevada is the first state with a significant Jewish population to vote in the Democratic primaries.

This isn’t enough for state party leaders (only the Democrats this time, since Republicans will not be holding caucuses in Nevada) to move the caucuses from Saturday to a day when Orthodox Jews can actually vote, but they did make a significant accommodation by allowing several days of early voting last week.

Is it enough to answer the needs of Shabbat-observing Jews? Probably. Though it would still cause a bit of a problem for a tiny sliver of Jewish residents in Nevada, who are Orthodox (about 10 percent of the national American Jewish population) and who vote Democratic (less than half of Orthodox Jews, according to polls) and who cannot make it to the early voting days.