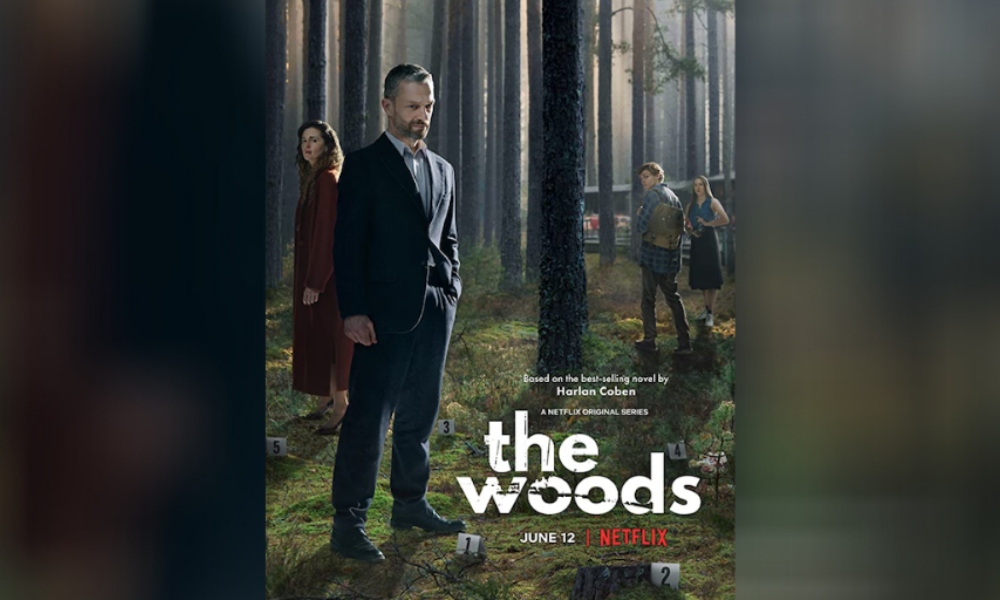 The next stop on our diaspora tour of lockdown streaming TV series brings us to Poland, although the route to this locale is a circuitous one.

In 2007, the best-selling American thriller writer Harlan Coben published a novel called The Woods. It was set in the 1980s at a Pennsylvania summer camp, and 25 years later in Essex County in northern New Jersey. Coben, a Jew and himself a former camp counselor with a history of summer romance, drew on these experiences for the novel.

The novel’s protagonist is a New Jersey prosecutor, Paul Copeland (formerly Pavel Copinsky), the son of a Jewish Soviet emigre, whose medical license was taken from him by anti-Semitic government officials. (Not surprising, in the land that produced Stalin’s Doctors Plot, in which only the dictator’s timely demise saved Jewish physicians further deadly persecutions.)

Twenty-five years earlier, in the 1980s, four young teens attending a summer camp named “Peace Love Understanding,” run by a Jewish hippie, snuck off into the woods. When they did not return, searchers found two of their bodies. But the others, including Copeland’s younger sister, simply vanished. Flash forward twenty -five years, when an event reopens the case.

This is the third Coben novel to be adapted to television, following The Stranger and Safe, and this incarnation of The Woods retains most of the major plot points from the novel. However, the Polish production company, with the help of the Polish Film Board, has transposed the action to Europe, setting it in 1994, and 2019, and has introduced a central Jewish plot element.

As the Netflix version of this six-part series graphically demonstrates, anti-Semitism, while certainly not everywhere in modern Poland, is never far from the surface. We Jews with Polish roots have, as they say, a history with that country, as they do with us. It is a familiar one, stretching back a thousand years, and includes the usual anti-Semitic calumnies—poisoning the wells to spread plague, using the blood of Christian children to make Passover matzahs.

And, yes, to be fair, it is a mixed history—not just pogroms and concentration camps. There is a rich vein of assimilation, acceptance and intermarriage. Some Poles have risked—and given—their lives in defense of their Jewish friends, colleagues and neighbors.

However, The Woods illustrates that it doesn’t take much for former Polish peasants and their descendants to default to historic anti-Semitism under stress. And some of this is very raw, vile and profane, which some viewers—and readers of this review—may find disturbing.

So it is, when the four teenagers in this version are killed or vanish from a sylvan summer camp affiliated with a high school whose principal is Jewish, he becomes the distraught parents’ obvious target. As someone who was overseeing the camp, he is singled out for blame in a vicious campaign of intimidation and harassment.

(And, while it’s a trivial point, it doesn’t help that the principal, David Goldstein, the English version of the Polish spelling, has perhaps the worst hair in television streaming history.)

“JEWS OUT” is painted on the hood of his powder-blue Mercedes. An angry neighbor says, “Jews, you’re only good with words.” Another says, “When they get their money they don’t give a shit about anything else.” A third chimes in, “Get out if you don’t like our country, kike!” Later, young people paint graffiti on his house: “Poland for Polish People Only,” with a Jewish star daubed next to the words.

“If you leave your fucking apartment I’ll fucking smash your Jew face in, you fucking Jewish swine,” one caller says.

The tormented principal, a single father, complains to a sympathetic, gentile neighbor, whose daughter is one of the missing, “I’ve never had to deal with such anti-Semitic nonsense…They’re trying to make a scapegoat out of us.”

Goldstein’s young teenage daughter, Laura, was having a summer romance with the same neighbor’s son, Pavel, who tries to defend her when the antagonism spills over to their school friends. He fights with one who says, “Goldstein’s a Jew and his kind ought to be killed.”

But Laura rebuffs Pavel’s efforts. “We don’t need help from anyone.”

As it turns out, they did need help. The principal is ruined financially by negligence damage suits, which leads to his physical and emotional decline.

Decades later, another murder, this one with an apparent link to the long-ago summer camp deaths and disappearances, draws the attention of Pavel, now a widowed public prosecutor. He reconnects with Laura, a married college professor, to try to solve the crime. She joins Pavel and, in the process of their investigation, her feelings for him are rekindled.

When it first aired in June, a reviewer for Forbes.com called The Woods “a beautifully shot captivating thriller.” It is that, notwithstanding some loose ends and inconsistencies in the plot. It is in Polish, available in both subtitled and dubbed versions, but for some reason, the version we watched was both subtitled and dubbed, and the dialogue did not always match. Still, I got the series’ entertaining and informative message—doubly.