‘May History Be Our Witness’
2018 March/April, Arts & Culture, Visual Moment

Even before the Jews in the Warsaw Ghetto (1940-1943) knew of the “Final Solution,” they understood that their story needed to be preserved. Under the leadership of Jewish historian Emanuel Ringelblum, a clandestine organization of about 60 researchers with the code name Oyneg Shabes (“the joy of Shabbat”) compiled and documented the experiences of the Jews of Warsaw under Nazi occupation. “It was an extraordinary act of civil resistance,” says historian Samuel Kassow, author of Who Will Write Our History: Rediscovering a Hidden Archive from the Warsaw Ghetto. “The Jews knew that the Germans wanted to control and determine how they would be remembered. They were determined to write their own history.” 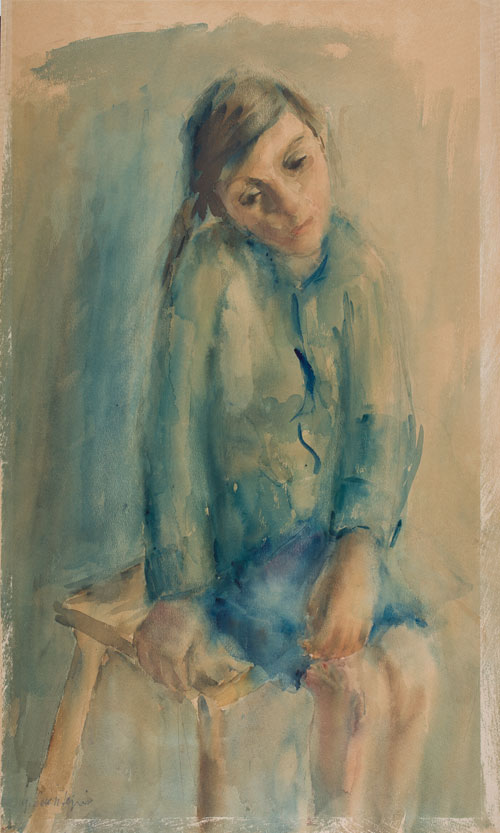 Some 300 paintings by Jewish artist Gela Seksztajn were included in the Warsaw Ghetto’s Ringelblum Archive. Seksztajn and her husband, Izrael Lichtensztejn, helped collect material for the archive.

Their goals evolved over time. When the project began in 1940, the researchers—a group that included historians, writers, artists, rabbis and social workers—simply wanted to collect information about the nearly 500,000 people imprisoned in the ghetto. They gathered diaries, essays, wills, photographs, poetry, paintings and items such as menus, concert tickets and candy wrappers to help record everyday life. But in 1941, as their fate became more evident, they distributed surveys that included questions on everything from the lives of Jewish women to corruption to religious life. The plan was to produce a book that would help people after the war learn from, and not repeat, the past. But on July 22, 1942, the deportations to the concentration camp Treblinka began, and Ringelblum hastily ordered the researchers to turn in everything they had in hand.

On August 2, 6,276 Jews were seized from the ghetto. Very early the next morning, the first part of the archive was buried in ten metal boxes in the brick foundation of an old school building at 68 Nowolipki Street. David Graber, age 19, placed a note inside the top of one box that read, “I would love to see the moment in which the great treasure will be dug up and scream the truth at the world. May the treasure fall into good hands, may it last into better times, may it alarm and alert the world to what happened…in the 20th century….May history be our witness.” Just hours later, 6,458 more Jews were deported, including Graber, who perished in Treblinka. 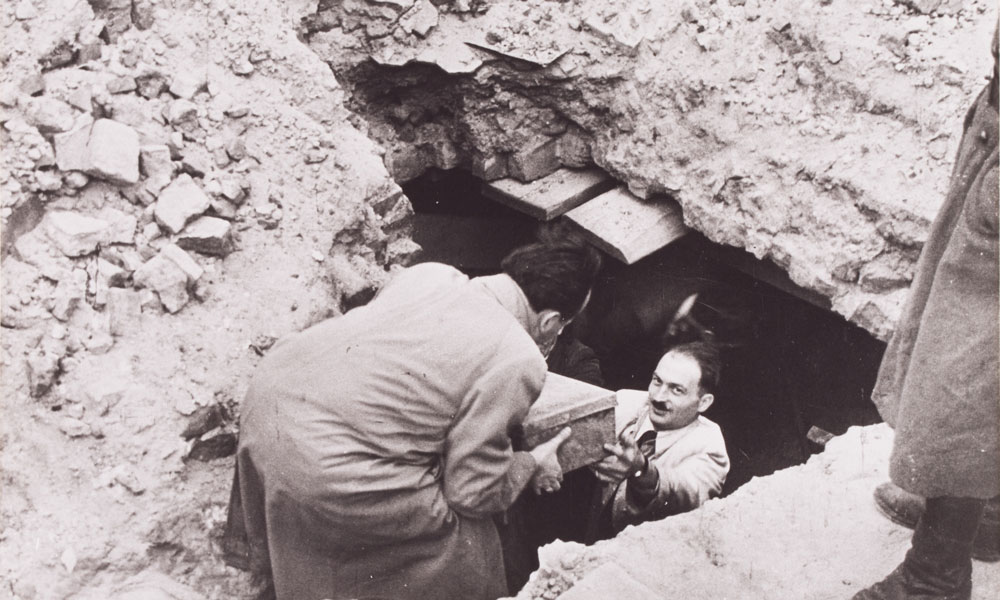 On September 18, 1946, survivors from Oyneg Shabes helped locate and unearth the first part of the archive assembled by historian Emanuel Ringelblum

To get word out about the genocide, the remaining members of Oyneg Shabes smuggled four reports to the Polish resistance that were shared with the British and American governments. The reports included detailed documentation of the mass murder in the concentration camps and contained a hand-drawn map of Treblinka. At the time, these reports were one of the West’s major sources of information about the “Final Solution.” Oyneg Shabes also buried two more caches of information, one in February of 1943, as residents of the ghetto starved and froze, and the last one just a week before the Warsaw Ghetto Uprising began on April 19, 1943. 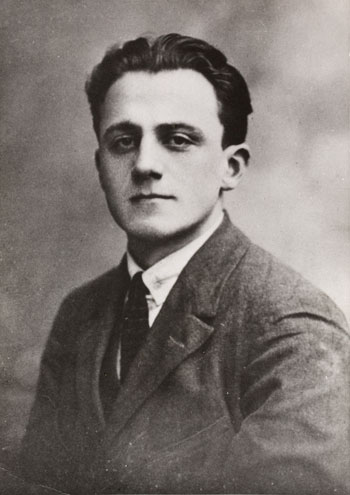 Emanuel Ringelblum as a young man

Only three members of Oyneg Shabes survived the war, and only one knew where the archive had been buried. In 1946, after months of careful calculating, a crew located the rubble of the old schoolhouse and dug beneath it to find ten metal boxes with documents intact, with only minor water damage. In 1950, construction workers at a new post-war housing complex in communist Warsaw accidentally stumbled upon two metal milk cans filled with documents, bringing the total number of items recovered, in what is now called the Ringelblum Archive, to 35,000. All efforts, however, to find the last and largest cache of documents have failed. In 2014, archaeologists excavated the garden of the Chinese embassy that now stands on what was Nowolipki Street, but they found only a few burnt pages of a diary. “Even so,” says Kassow, “the bottom line is that because of the Ringelblum Archive, you can write about the Jewish people as individuals with names. If we had to depend just on the German sources, they would be faceless anonymous victims.” 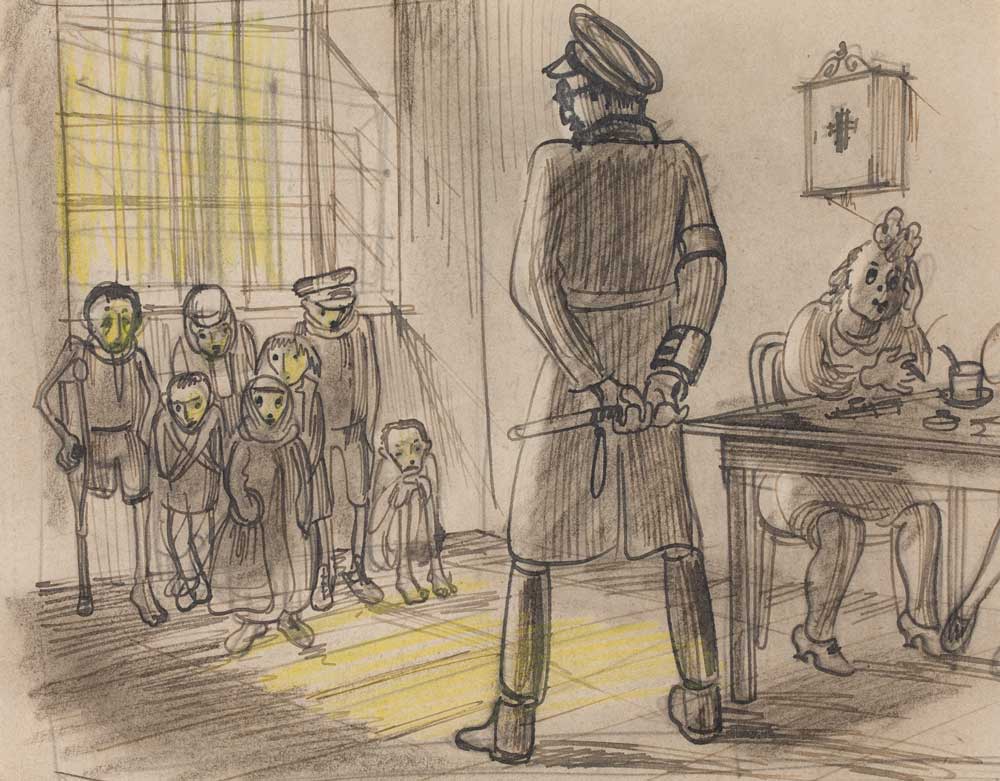 A sketch signed “Rozenfeld” and titled “Staging Point” (portraying the arrest of children for smuggling).

As the only collection of its kind, the archive has provided a critical foundation for Holocaust research. Last November, the Emanuel Ringelblum Jewish Historical Institute in Warsaw, which houses the archive, unveiled its permanent Ringelblum exhibition. The institute is in the same building where Ringelblum originally worked on the archive. This May is the 75th anniversary of the Warsaw uprising and of Ringelblum’s death. Books, exhibits, conferences and a documentary are planned to mark the anniversary. In the end, the archive has served its main purpose. “It was a major victory,” Kassow declares. “The archive shows that you can fight with pen and paper, not just guns. Ringelblum understood that history is not just about scholarship. It can be a very powerful weapon for the truth.”