On Monday, Gail Stalarow of Houston, TX received a text from an unknown number in a group chat a friend of hers had started.

“Alan Hoffman just called and said there are 850 shots at Methodist that need to be given out before noon today,” the text stated. It was 9:57 a.m.

After temperatures began to drop in Houston as freezing rain and sleet took hold of the city on February 15, Houston Methodist Hospital canceled vaccine appointments for that day and the following to keep locals off the now-dangerous, icy roads. But due to a fluctuation in the freezers that held the county’s supply of usable vaccines, hundreds of first doses of the Moderna vaccine would go to waste if higher-ups at the hospital didn’t act fast.

Similar vaccine gold rushes have occurred across the country.

“I had to make a game-time, quick decision,” says Stalarow, 56, who rounded up her husband, Norman, 63, and a friend who she knew had been struggling to get a vaccine appointment. The trio avoided the freeway and found a route to United Orthodox Synagogues (UOS), where the vaccines were being administered, that didn’t include any bridges.

“What can we do, and where can we do it?” Roberta Schwartz, executive vice president and chief innovation officer of Houston Methodist Hospital, remembers thinking when she got the call from Harris County officials about the extra vaccines that were going to expire in a matter of hours. She felt like a deer in headlights. 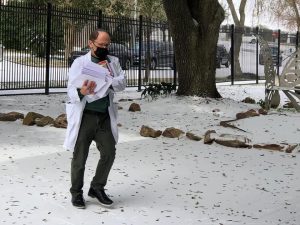 Schwartz quickly decided to call on the community of her congregation, United Orthodox Synagogues, and enlist Alan Hoffman, a fellow member and colleague at Houston Methodist Hospital, to coordinate an impromptu vaccine site at the synagogue. Hoffman then contacted 45 doctors, nurses and other volunteers to ask if they would be willing to act as medical directors. 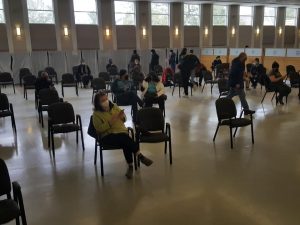 Those vaccinated rest for ten to fifteen minutes after getting the shot.

Thus, the spontaneous event was in motion: With the help of volunteers from the community, UOS rabbi Barry Gelman divided the synagogue into sections for Houstonians to register their personal information, receive the vaccine and rest afterward while volunteer doctors and nurses monitored for any adverse allergic reactions.

Over 350 people from the surrounding community were vaccinated on that day in the eight separate vaccination stations operated by two-person teams—a vaccinator and a scribe to take down personal information from each patient. Another 210 got the shot on Tuesday, February 16, at the second iteration of the event at UOS.

Along with the vaccine vials themselves, Hoffman had brought the necessary equipment to administer the shots, such as needles, vaccine cards, gloves and documentation from Houston Methodist Hospital. But other essential items—from EpiPens, steroids and Benadryl to curb allergic reactions, to stethoscopes to monitor vaccine recipients, and even pens and clipboards—came from the UOS doctors and nurses that volunteered at the event.

“Our community has so many medical professionals,” thanks to nearby Texas Medical Center, says MD Anderson oncologist and UOS member who helped administer vaccines at the synagogue, Ethan Ludmir. “Essentially, everyone said, ‘I can come, and I can bring X, Y, and Z with me,’” Ludmir says.

As the process got underway, Gelman made his way through the long line that had formed outside the synagogue to ask for people’s ages, move those who were 75 years and older to the front of the line and reassure those waiting that the line was moving. “A line like that can be very anxiety-provoking. I was concerned that maybe people would get nervous,” says Gelman, who made an effort to joke around with people in line.

Vaccine recipients, like Staralow and Ida Alyea, 50, neither of whom are members of UOS, were grateful for Gelman’s encouragement. “People were jovial there,” says Alyea, who cried tears of happiness when she got the vaccine. “Everybody felt that they were part of history.” 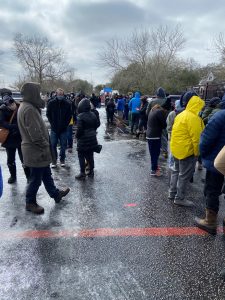 The line outside OUS.

Notably, UOS’s vaccination event (which was affiliated with Houston Methodist Hospital) follows a newsworthy vaccine controversy set in the same city: that of Hasan Gokal, who administered quick-to-expire doses of the vaccine to as many eligible people as he could find, including his wife. Gokal was swiftly fired from his job and charged with a misdemeanor for stealing ten vaccines.

“We were asked to give it out, and we were not given any restrictions,” said Hoffman, clarifying the differences between his coordination of the vaccine event at UOS and Gokal’s individual mission not to let vaccines go to waste. When speaking with The New York Times, Gokal said that he got the “OK” to administer the extra vaccines from a Harris county public health official.

Schwartz echoed Hoffman’s statement: “It’s more important that it gets used than it gets used perfectly for exactly the right people,” she says. “The county said to use these and was perfectly aware that to do that quickly, we would have to go out of order.”

Since the FDA approved both the Moderna and Pfizer vaccines, Gelman has encouraged his congregation to get the vaccine by bringing in doctors to speak to the community and focusing on Jewish principles like pikuach nefesh (“saving a life”).

END_OF_DOCUMENT_TOKEN_TO_BE_REPLACED

Since the pandemic began, DeSantis has aped Trump’s responses–and non-responses–to the crisis. He has refused to take significant state action to stem the now-record rising tide of COVID-19. This has included intransigent resistance to mandating the use of masks, closing the beaches and ordering a stay-at-home lockdown. Echoing Trump, he deferred to local authorities to take such action.