Spicy tajines and colorful Berber rugs beckon tourists to Morocco, but for the Jewish traveler, there is an added historic and spiritual lure. This North African Kingdom has a long tradition of tolerance towards Jews, who have called Morocco home for centuries. While most of its quarter of a million Jews emigrated to Israel, Europe and the U.S., 2,500 remain today. Traces of their deep-rooted culture stretch from the Mediterranean to the Sahara, a less-traveled region steeped in Jewish history.

Two major events brought Jews to Morocco. The first was the fall of the second temple of Jerusalem in 70 CE. The second was a cataclysmic decree in late 15th-century Spain, which forced close to 200,000 Jews to leave or convert. They had four months to decide; a mass exodus followed. Many Iberian Jews fled to the tip of Spain and sailed the seven miles across the Straits of Gibraltar to freedom in Morocco. Sephardic communities soon grew in the coastal cities of Tangier and Tetouan, introducing the Ladino language and red-roofed Andalusian architecture reminiscent of their homes in Granada. Jewish refugees ventured farther south to Chefchaouen in the foothills of the Rif mountains and, as if that wasn’t a long enough trek, they crossed over the High Atlas Mountains to settle in desert villages that bordered the Sahara.

These Megorashim, as Jews fleeing the Inquisition were called, left an indelible imprint on Moroccan society that remains today.

TANGIER: City of Refuge and Trade

This beautiful city, a short ferry ride from Spain, is shaped by the sea, sitting at the convergence of the Atlantic and the Mediterranean. Jewish settlers, taking advantage of this strategic location, played an important role in linking these two shipping routes, bringing these Megorashim great wealth, as well as political and social power.

“There were once 18 synagogues in Tangier,” explained tall, imposing local guide Mohammed Harrak, standing in Tangier’s busy medina, the old section of the city. “At its peak, the city had 22,000 Jews,” he added between greetings of Salaam Alaikum to passers-by. His Berber mother, he recalled, turned off lights for their Jewish neighbors on Shabbat. It seemed every local had some fond remembrance of a Jewish friend or family. Today most of them are gone; only 70 Jews remain. The synagogues have become museums.

Tucked away on a quiet street, the 19th century Moise Nahon Synagogue is filled with elaborate Islamic patterns and Arabic calligraphy in the Andalusian style. Glass chandeliers hang from its high ceiling lighting a balcony filled with centuries-old ketubahs. Silver candelabras and ancient Torahs are reminders of a once active community. Along with the smaller synagogue, Rabbi Akiba, both now host celebrations but do not hold services.

During World War II, the city was a crucial transit point for refugees streaming in from Nazi-occupied Europe. The nearby American Legation, the oldest American consulate, played an important role in processing them. A letter from Renee Reichmann, representative of the Joint Distribution Committee, is framed on a wall in the Legation Museum, thanking the Charge d’Affaires, J. Rives Childs, for helping obtain visas for 500 children and adults, all Hungarian Jews. The letter praises him for saving “1,200 innocent souls.” Childs carried that letter with him for the rest of his life.

Tangier’s old Jewish cemetery, Beit Hahayim, is an oasis of peace amid the traffic just outside the medina walls. With a view of the harbor, its palm trees shade over a thousand gravestones engraved in Hebrew, Spanish, Portuguese and French. Some stones date back to the 16th century, though many are badly eroded. 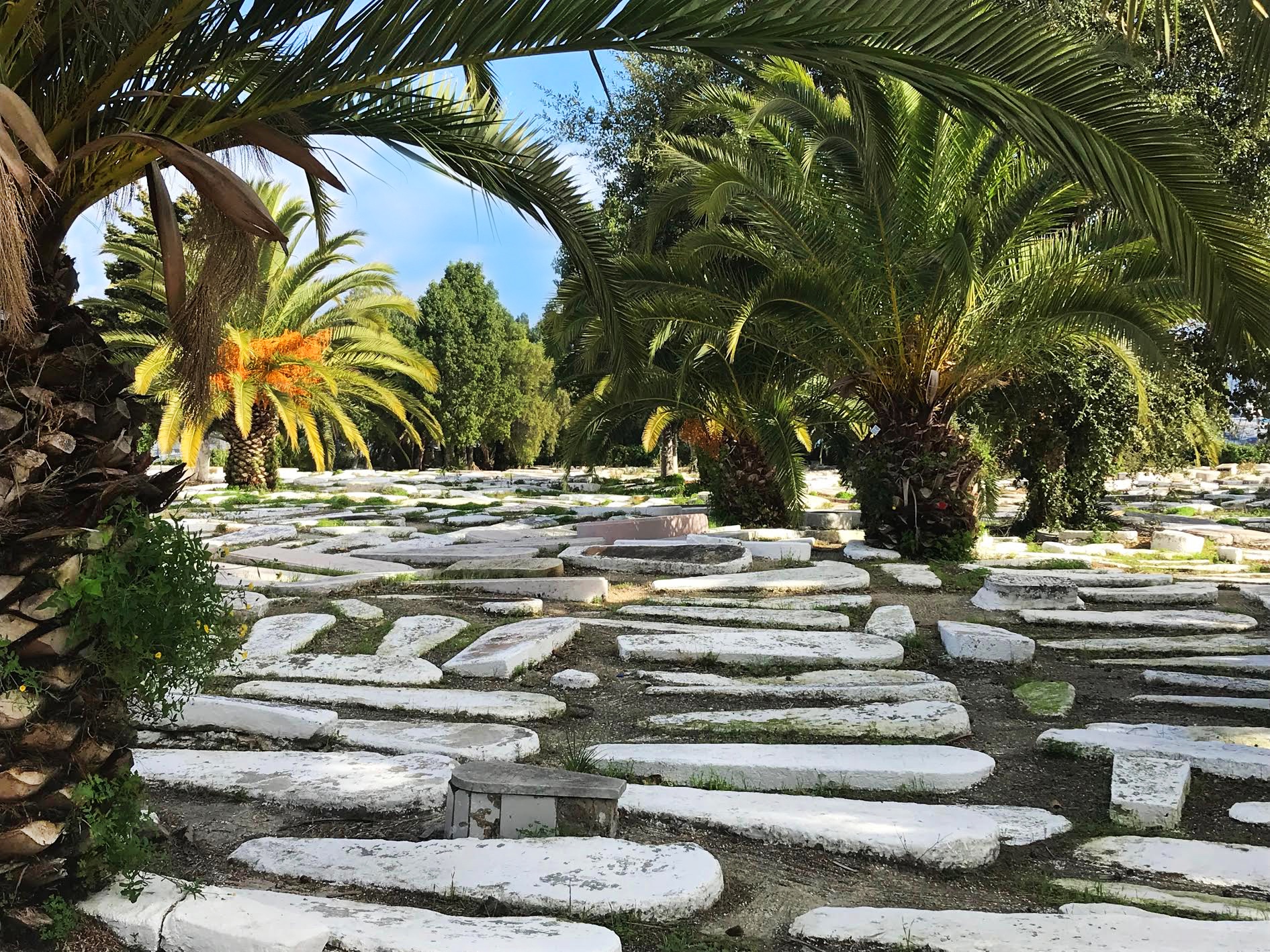 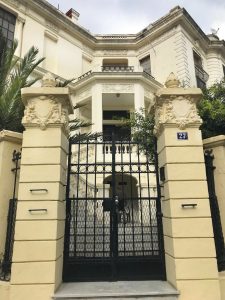 In Tangier’s newer sector, Chaar Refael is the one active synagogue for Tangier’s remaining Jewish community. Built in 1919 as a villa for wealthy Jewish businessman Raphael Bendriahm, it was converted to a synagogue in 1954. Its rabbi, Jacob Tordjman, was born in Erfoud, on the edge of the Sahara. On arrival in Tangier, this French-speaking rabbi was surprised to find a Spanish-speaking Jewish community. 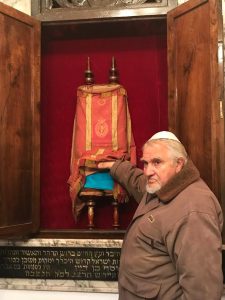 Eighty-year-old Leon Bentolila hurried through the narrow streets of Tetouan’s Jewish quarter with the keys to the synagogue. It was pouring, and the winding alleyways of the quarter, or mellah, were slick from a November rain. After passing streets named Bait Lahm, Sultana Cohen Street and Isaac Bengualid, he stopped at the thick wooden door of Isaac Ben Walid Synagogue.

Once called “Little Jerusalem,” Tetouan, just 40 miles from Tangier, was the heart of the Sephardi community in Morocco, representing almost half the city’s population. Tetouan was a thriving port. Trade remained exclusively in the hands of the local Jewish community, who prospered and built 16 synagogues.

Only one shul remains today. Bentolila is its caretaker; a stocky man with a twinkle in his eye, he is one of the last Jews of Tetouan.

The Isaac Ben Walid Synagogue is named after Tetouan’s beloved rabbi and revered tzaddik, Isaac Bengualid. A descendent of Spanish Jews, he devoted his life to Torah study and was thought to have kabbalah mystical powers. He led the rabbinical court in Tetouan. His namesake synagogue housed a legal court, a library, a matzah oven, and a mikvah.

Before 1968 there were more than a thousand Jews still living in Tetouan. Today, only ten old Jews call the city home—and Bentolila and his wife watch over them. The city’s Jewish cemetery is the place of rest for an estimated 35,000 graves. It’s the oldest cemetery in Morocco and one of the largest.

Staying close to his tzaddik is one reason Bentolila remains in Tetouan. “I’ve lived here for over fifty years with no problems. My neighbors are Muslim and we are all like brothers and sisters,” he said. Bentolila and his wife keep kosher, with kashrut provisions sent from Casablanca’s Jewish community.

The Bentolila children have all moved to Malaga in southern Spain, but their father insists, “I’m staying. I was born in Tetouan, my tzaddik is here and I will die in Tetouan.”

This beautiful village is set against the backdrop of the Rif Mountains, a location that made it a safe refuge for Jews and Moors fleeing the Inquisition in the late 15th century. It became a thriving merchant route, and the Jews of Chefchaouen (pronounced shef-sha-wehn)  prospered. 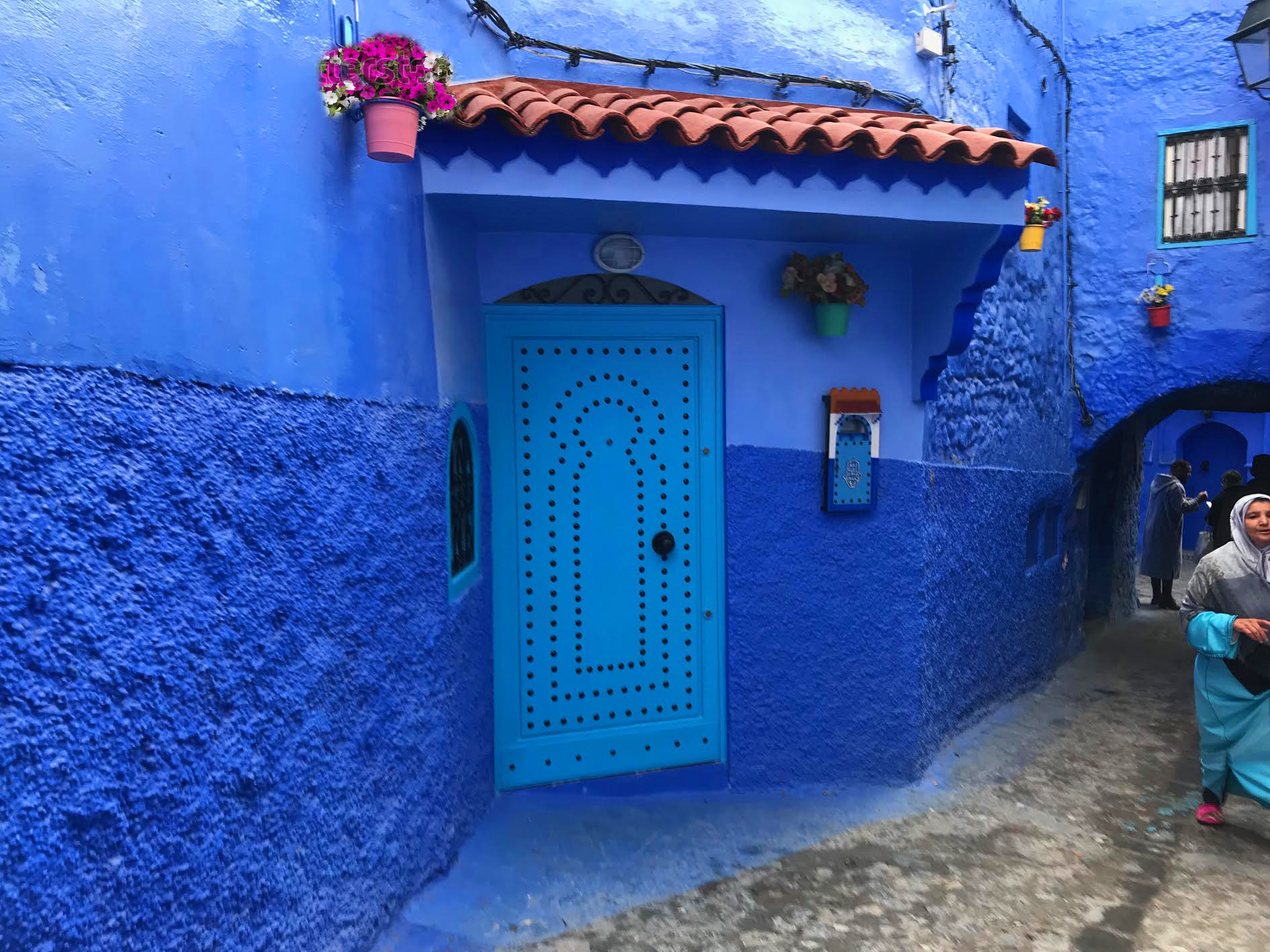 Of all the remnants of Jewish life in Morocco, Chefchaouen’s are the most visible. This city of steep steps and narrow winding streets is rinsed in blue, from its stucco walls to its weathered wooden doors. Conflicting stories say Chefchaouen’s Jews introduced the azure paint either upon arrival in the 15th century or in the 1930s while seeking refuge from Nazi persecution. Why blue? According to our guide, Yousef, it represents the sky, heaven and God’s ever-present power. He added, “Locals repaint the city blue before Ramadan every year, honoring the Jewish tradition.” The color is said to also repel mosquitoes and attract tourists (quite obviously from all the souvenir shops).

Yousef pointed out a sign reading El Mellah el Yadid, the Jewish quarter, where the last Jews left for Israel in 1968.

Windswept Erfoud was a major Jewish hub in Morocco’s largest Saharan oasis. Here, Jews financed the caravan trade with sub-Saharan Africa from the eighth century and worked as merchants and artisans. They intermarried with the local Berbers, who often embraced the Jewish religion. In the 1950s about a third of this desert town was Jewish. Shops would close on Shabbat; there was a local Talmud Torah Jewish day school and a new synagogue. 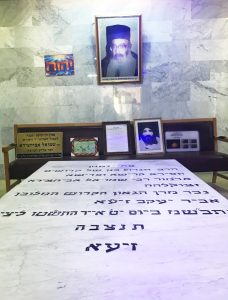 Annual hiloulas (pilgrimages) attract Orthodox Jews from around the world who converge on the graves of great Rabbis and Kabbalists—their tzaddiks. One of them is Rabbi Shmuel Abuhatzeira (also known as Baba Sali), the grandson of a legendary Moroccan rabbi, Abir Yaakov. His shrine, in the Erfoud cemetery, is visited by 100,000 followers each year on the anniversary of his death. A new synagogue on the cemetery grounds welcomes the faithful. 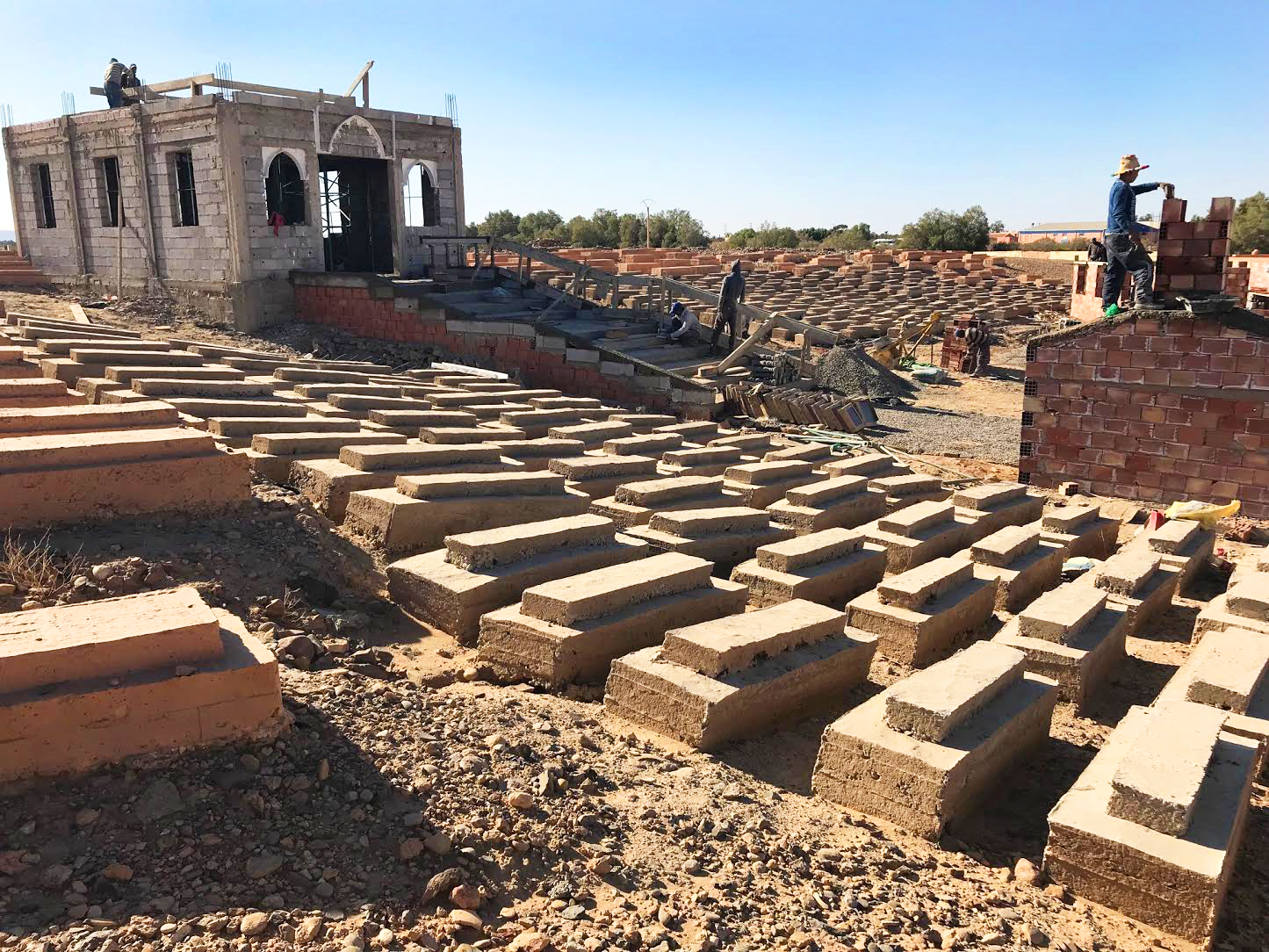 One of them, Casablanca born Reuven Elharrar, now of Montreal, comes to pray in Morocco twice a year. He is masterminding the construction of a hiloula site encompassing thousands of restored graves in a cemetery in nearby Rissani. It will include a synagogue, kosher kitchen and rabbinical housing. This small oasis town is the burial site of a relative of the Abuhatzeira family. Funds from around the world have poured in to build a mausoleum for the revered Rabbi David Abuhatzeira, who died in 1919. When completed, thousands will gather for an annual hiloula.

The 500-year-old Rissani cemetery sits on the northwest edge of the Sahara, containing 6000 tombs. Standing in the hot desert sun, Elharrar seemed wistful. “Many Jews used to live here, but now they are in Israel. They all donated to this project because they want to remember their ancestors.”

Elsewhere in the world Jewish heritage has been erased, but here, the spirit of these respected ancestors is woven into Morocco’s culture too tightly to be forgotten. 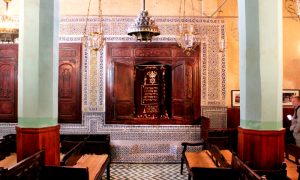 END_OF_DOCUMENT_TOKEN_TO_BE_REPLACED

The total population of Malta is 430,000, including about 150 Jews, most of whom live on the main island and make up one of the smallest active Jewish communities in the Mediterranean.

END_OF_DOCUMENT_TOKEN_TO_BE_REPLACED

2 thoughts on “Tracing Morocco’s Jewish Past”