Kahn's paintings are now on display in a new exhibit at The Phillips Collection in Washington, DC
Arts & Culture, Latest

Artist Tobi Kahn’s paintings and sculptures celebrate life and explore the realms of memory, spirituality and meditation. Contemplative and sensual, his works are in the collections of such prominent museums as the Minneapolis Institute of Art, the Solomon R. Guggenheim Museum and The Jewish Museum in New York City. His work has been the focus of more than 70 solo museum shows, as well as a number of traveling exhibitions. Kahn, who has been a professor at the School of Visual Arts in New York City since the mid 1980s, lives on the Upper West Side of Manhattan and has a studio in Long Island City. He is also a cofounder of the Artists’ Beit Midrash, a sacred text and art program at the Streicker Center of Temple Emanu-El in New York City. Recently, The Phillips Collection in Washington, DC, which owns seven of Kahn’s paintings, mounted an exhibition showcasing those works. Moment arts editor Diane M. Bolz recently visited the exhibition (on display until May) and interviewed Kahn about his work.

I was intrigued by the exhibition statement accompanying your current show at The Phillips Collection. In addition to highlighting the formal relationship of your paintings to American modernists such as Arthur Dove, Marsden Hartley and Georgia O’Keeffe, the statement notes that your work is “grounded in a tradition of spiritual abstraction in art” and is closely linked to Judaism and its ceremonies. Can you elaborate?

I don’t see a separation between any part of my work. I am a painter, a sculptor, a creator of Judaica. I create meditative and healing rooms, interfaith spaces and Holocaust memorials. Art is a holy act. I’ve always felt that. For the rites of passage in our family, I created the chuppah that my wife and I got married under, and our daughter just got married under the same chuppah. I’ve also created baby naming chairs for our son and daughters. 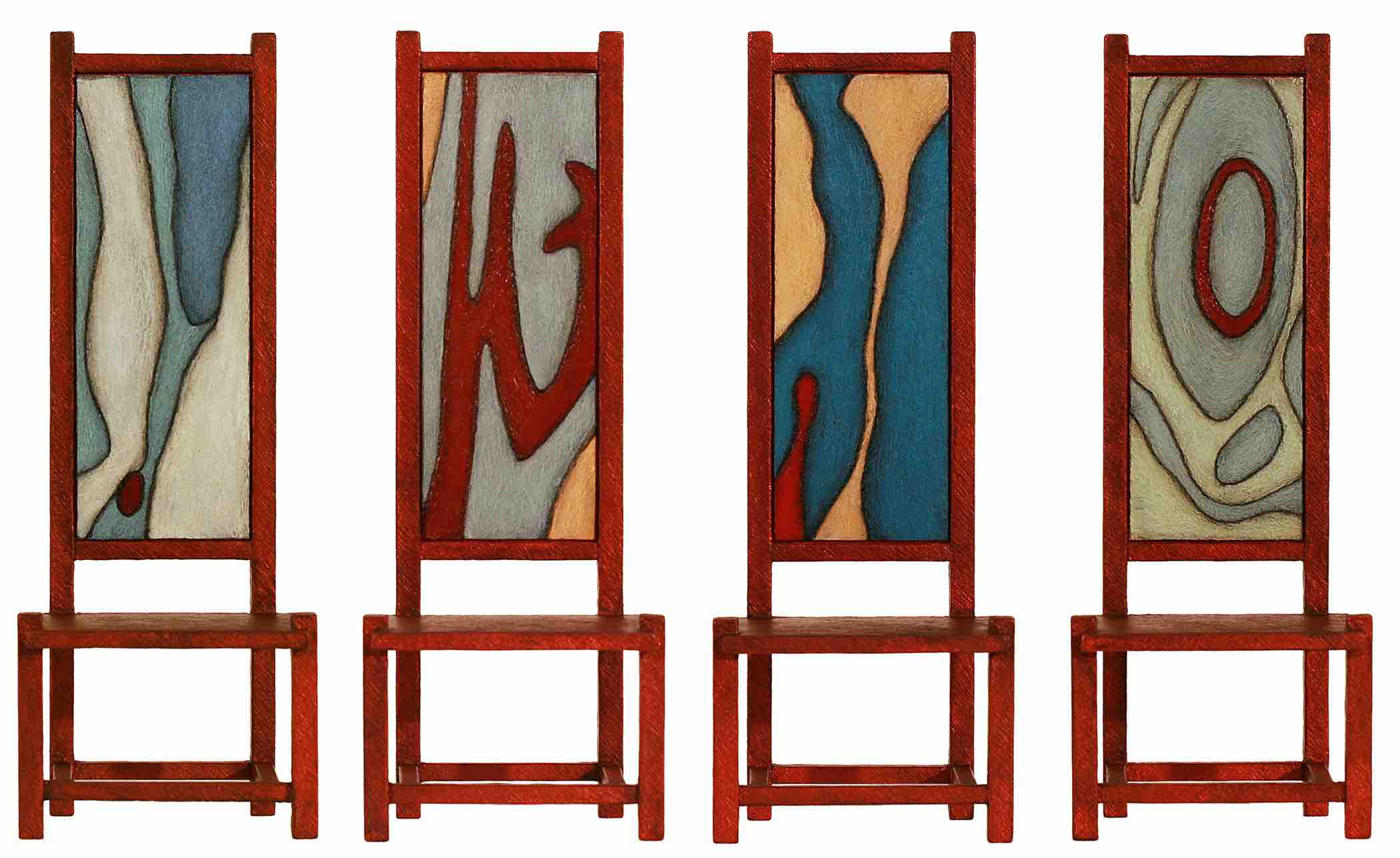 I believe in God, and I believe I was put on this planet to make art. My mentor, the art historian and curator Peter Selz, said that my work has a holiness about it. I don’t put on a different hat for my ceremonial objects or for my painting or for my interfaith work. So I think that’s what the wall text in the exhibition is referring to.

I’ve always loved the American modernists; the luminous painters as well. The exhibition text also mentions Russian artists Wassily Kandinsky and Kazimir Malevich, both of whom have influenced my work. Kandinsky wrote a beautiful and powerful manifesto about spirituality and art. My work is meant to make the viewer feel uplifted. I just completed a piece for the 9/11 museum. I was given the last two fragments of steel from the World Trade Center by the MTA to create a sculpture of memorial lights. I was very touched that they asked me to do it because they know that I’m very committed to making healing works of art.

You mentioned your mentor, Peter Selz?

He passed away several years ago. He was an extremely influential art historian, museum director and curator who specialized in German Expressionism. He was a curator of painting and sculpture at MoMA in the late 1950s and early 1960s and became the founding director of the Berkeley Museum of Fine Arts in California in 1965. Peter curated three traveling museum shows of mine. In fact, I didn’t think of it until just now, but the image on the cover of the catalog for his “Metamorphoses” exhibition of my work is one of the paintings now on view at the Phillips Collection. It’s the small, dark green and maroon and yellow work called SIDO, from 1989. “Metamorphoses “ traveled to eight museums around the country in the late 1990s.

In the Phillips show, every image has a title, but they are all rather enigmatic—“LYJE,” “INHA.” Can you explain how you title your works? What are you trying to capture or express in them?

I’m not interested in using the word “Untitled,” but as my work is abstract, so are the names. Titles are abstract distillations that bear the same allusive relationship to language as my images do to representation. The titles are meant to evoke a thought or a memory. They’re often based on Hebrew, but not always. My wife is the writer Nessa Rapoport, and we work together to create the titles, to come up with a name that tells that story without being explicit. I’m interested in the elusiveness of what a word can be.

The paintings I create are based on memories. They are derived from photographs that I’ve taken and then they’re transmuted into the memory of what I saw. I like the fact that the names are not literal—that you, the viewer, can think about them any way you want. I’m interested in you reading the painting, not the label. I want you to look at the image and then you can say, “Oh, ‘SIDO,’ that reminds me of this, or that.” The names are a way to get you into the image, but not tell you what the image is.

There’s one painting in the exhibit that looks sort of like a flower. Can you talk about that image?

The name of that piece is “LYJE,” and it was done in 1991. It is a flower. Rather, it’s based on a flower. I became interested in the regalness of individual flowers and how they looked throughout their life, and especially at the height of their life. The image is basically abstract, but I like that you said it reminded you of a flower. I am interested in what the viewer brings to an image. All my work is about showing you, the viewer, what interested me and you bringing that to the conversation. I’m committed to there being a dialogue between you, the viewer, and me, the artist. I want you to bring your own memory to the event.

There’s another painting that really intrigued me. It evokes a figure bending over as seen from the back. It is titled “INHA.”

That’s from a newer body of work that I recently completed. That show, “Formation: Images of the Body,” opened virtually in December 2020, but because of COVID it is now only opening in person on May 8 of this year. It will be at the Henry Luce III Center for the Arts and Religion in Washington, DC through August. It’s a solo exhibition and it is accompanied by a beautiful catalog.

I actually have two solo museum shows opening this year. The second one is called “Elemental: A Decade of Paintings by Tobi Kahn.” It will be opening November 19 at the Museum of Contemporary Art, Long Island, in Patchogue. The exhibition will feature ten years of work based on landscape and will be on view through January 29, 2023.

Can you fill me in a little bit about your background?

I was born in Washington Heights. I went to Jewish day school until 12th grade. Then I studied acting at Tel Aviv University. I continued studying in Israel for three more years, the last two at Yeshivat Har Etzion in Alon Shvut, near Jerusalem. I then returned to the United States and went to art school in New York City at Hunter College and Pratt Institute.

I’m a child of Holocaust survivors and I’m named for my uncle, Arthur Kahn. My middle name is Aaron, which was his Hebrew name. If you Google Arthur Kahn, you’ll see a book by Timothy Ryback called Hitler’s First Victims, which is about my uncle and three others—the first four Jews killed by Hitler in 1933. I think one of the reasons I’m so committed to doing interfaith work and healing work and hospital work is that he was an artist and a medical student. He was killed in his early 20s, and it’s very important to me that I’m not only representing my life, but I’m also representing his life. I am very committed to making sure that the world is left a better place than before I was born.

When you started out as an artist, were you primarily doing painting? Were you always involved in creating sacred objects, or was that a later development in your career? Can you talk about some of your Judaica work?

I received my BA from Hunter in photography and printmaking and an MFA from Pratt in painting and sculpture. But I’ve been making art since I was six years old. And I always made sacred objects. I just didn’t exhibit that work until I was older. In the late 1990s, Laura Kruger, the curator at the museum of Hebrew Union College, Peter Selz and others told me that it was important for me to show the Judaica I was creating, because they felt that if I didn’t show it, some people would feel that I didn’t take it as seriously as the rest of my art. And that is why I started showing that aspect of my work.

In 1999, Laura Kruger curated a show of my work called “Objects of the Spirit: Ritual and the Art of Tobi Kahn,” which traveled to more than 20 museums around the country. The exhibition featured more than 30 of my ceremonial objects, along with some of my paintings and sculptures.

“Tobi Kahn: Sacred Spaces for the 21st Century,” which opened at the Museum of Biblical Art (MOBIA) in New York City in 2009, was the second museum exhibition that concentrated on my Judaica. It featured all new ceremonial objects, and it also included models for eight wall murals, ark doors and other liturgical objects that I had created for a synagogue in Milwaukee. I was the first living artist to have a solo show at MOBIA, which was not a Jewish museum. The director at the museum felt that my commitment to holiness and religion made the work an excellent fit. 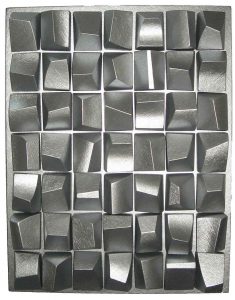 One of the ceremonial objects in the show was “SAPHYR,” the Omer counter I created, which has become the most well-known of my Judaica pieces. To date I’ve created 29 Omer counters, which are located all over the world. The Omer counter derives from the commandment in the Torah to count 49 days beginning from the day on which the Omer, a sacrifice containing an omer measure of barley, was offered in the Temple in Jerusalem, up until the day before an offering of wheat was brought to the Temple on Shavuot. The counting of the Omer begins on the second day of Passover.

I never dreamed that so many people would be interested in my Judaica work. I was shocked, to be honest. More people know me as a painter than anything else to this day, but now the ceremonial objects have gotten their own audience as well. I am an artist who does many different things. That’s how I see myself.