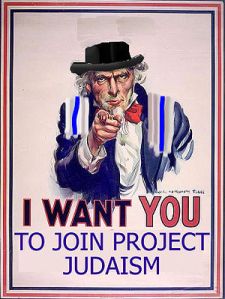 The CCAR, a group that represents over 2000 Reform rabbis, decided to turn the trend of interfaith marriage to their advantage by promoting conversion of non-Jewish spouses, reports the Washington Post. Though this seems a step in a favorable direction for intermarried couples, other rabbis and Jews are questioning whether they have the have the right to call people into the tribe, so to speak.

Jews do not have a history of proselytization. Unlike Christianity or Islam, which stress that a person can be saved from eternal damnation by converting, Judaism does not believe a person is doomed if they are not Jewish. And conversion to Judaism is a difficult process – potential converts are refused three times before they can begin the process. Sincerity is carefully gauged, and the learning process doesn’t stop after conversion is finalized. Given this level of difficulty, Jews seem happy to remain a small community.

What is interesting, however, as the Washington Post observes, is that the idea of Jewish proselytization is legitimized by the desire to avoid intermarriage, while Jews frown on Christian or Islam proselytization. If Jews can proselytize, then why can’t Christians and Muslims? It is hypocritical to judge others for something we might do. Perhaps it’s a numbers question. The Jewish population is smaller, therefore we should be able to bolster our numbers to be able to compete with the other major religions. But if we become swept up in competition, then the educational aspect of religion, the Jewish love of learning, will be forgotten.

There is no doubt that this is a question of survival. Jewish numbers have thinned over the years, and we should try to maintain our history and tradition. But forcing conversion on unwilling spouses will ultimately backfire, and might lead to children with no interest in religion. Proselytizing is not a bad idea, but it should be approached carefully. Sincerity and a willingness to learn, the main requirements for conversion, must be stressed. Better that the Jews gain a smaller crop of enthusiastic converts than a larger, indifferent group.

END_OF_DOCUMENT_TOKEN_TO_BE_REPLACED

Facebook Twitter Pinterest linkedin Telegram
I moved from Cleveland to the woods of Connecticut in 1981 to start a new job as an engineer for Uniroyal. It was February and freezing...

END_OF_DOCUMENT_TOKEN_TO_BE_REPLACED

Ask The Rabbis // Is it the job of rabbis to fight intermarriage?

Facebook Twitter Pinterest linkedin Telegram
INDEPENDENT Intermarriage is a reality of American Jewish life that isn’t receding, no matter how valiant the efforts to counter it. T...

END_OF_DOCUMENT_TOKEN_TO_BE_REPLACED

Losing (and Finding) My Religion

Facebook Twitter Pinterest linkedin Telegram
by Maddie Ulanow It’s always interesting when, on a particular Friday night, we get a new high turnout of students for the weekly Shab...

END_OF_DOCUMENT_TOKEN_TO_BE_REPLACED

All Converts Go To Heaven: The Case of Elizabeth Taylor

END_OF_DOCUMENT_TOKEN_TO_BE_REPLACED

Facebook Twitter Pinterest linkedin Telegram
by Steven Philp This past Saturday my family sat around the Christmas tree to unwrap presents. We have a particular system when it com...

END_OF_DOCUMENT_TOKEN_TO_BE_REPLACED

Facebook Twitter Pinterest linkedin Telegram
By Sarah Breger What you missed this weekend while playing in the snow: Chelsea Clinton agreed to wed a Jew. We rejoiced. We invest...