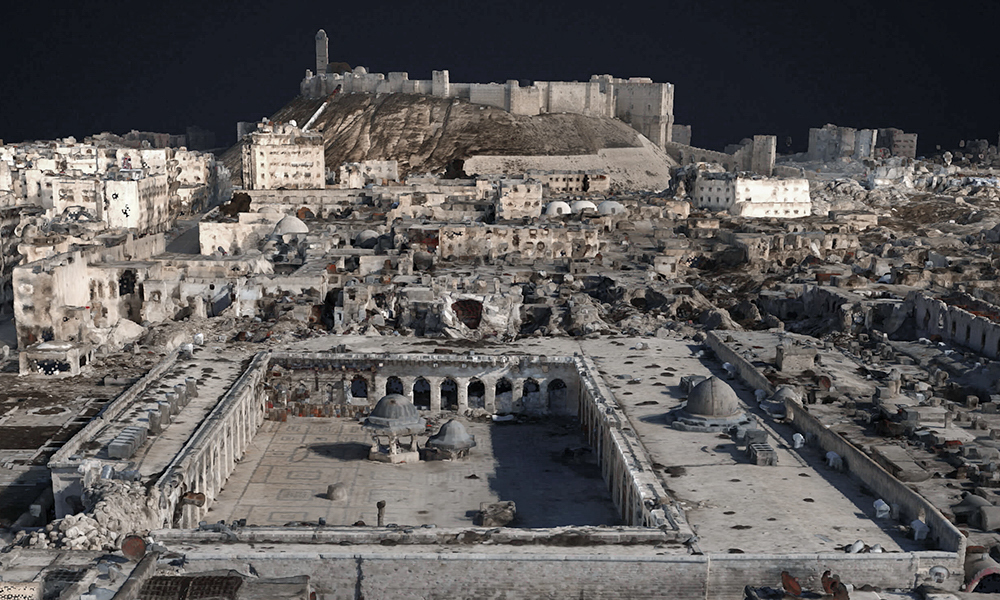 In a bare room adjoining the Arthur M. Sackler Gallery of the Smithsonian’s National Museum of Asian Art, Chief Curator Massumeh Farhad places a virtual reality headset over her eyes. She watches, flinches, then exclaims, “Oh, God—it’s so sad!” With the headset on, she’s time traveling: walking in the souk in Aleppo, Syria, once a world-famous tourist attraction, recently destroyed by the Syrian civil war. The virtual reality (VR) programming is part of an ambitious exhibition called “Age Old Cities: A Virtual Journey from Palmyra to Mosul,” created for the Arab World Institute in Paris by the tech startup Iconem. Until the coronavirus crisis, the exhibit was traveling the world to raise awareness of cultural destruction.The VR component can be viewed online at asia.si.edu/exhibition/age-old-cities-vr-360-video.

“It takes you right to the destruction, and that’s a good thing.”

The idea is clever, its promise seductive: Somehow, virtual reality technology will leapfrog us through time, allowing us to experience these incomparable sites despite their destruction. The visitor, the publicity materials say, becomes “a real person walking around exploring the sites…A subtle approach to sound, animation, lighting and special effects really revives these monuments, offering visitors the incredible feeling of being present on the premises, the impression of having been there.” The French company Ubisoft, creator of the popular video game series “Assassin’s Creed,” lent its graphics skills; intrepid staffers took tens of thousands of pictures in the war zones—some with drones, some in person—to stitch together into the immersive experience of walking in the souk, or the Temple at Baalshamin in Palmyra, or the Great Mosque of al-Nuri in Mosul, or three other lost landmarks. At the press opening, Jack Lang, head of the Arab World Institute and a former French culture minister, said the exhibit “gives us hope—hope that art will revive the will to protect these treasures of humanity.” The galleries show wall-size reimaginings of Palmyra’s classical temples. In wrenching videos, inhabitants describe the war and destruction they’ve witnessed.

Farhad, the curator, had visited the Aleppo souk many times; it was a place she loved. “You’d turn your head and there’d be a 14th-century wooden door,” she says. “It was amazing, everything jumbled up together.” But when she puts on the headset (I know, because I tried it), that’s not what she sees. The VR shows her the souk as it is today. Lumps of plaster and stone where centuries of ornamentation were stripped away. Black mold growing on the white stone of ruins. Heaps of rubble, occasionally dividing into pixels where the drone didn’t get enough data points and the digital rendering breaks down. The scene shifts, and you’re walking through the yawning, trash-filled nave of the Great Mosque. It’s spectacular—and heartbreaking. The VR can take us to the past, all right—just not always the past we want.

“It takes you right to the destruction,” Farhad says, “and that’s a good thing. We’re so far away from the Middle East, and the destruction is so vast. It’s easy to forget it’s real.” There are other ways of returning in imagination to the cities as they looked before their destruction—the Sackler also has matchless collections of photographs of Aleppo, Palmyra and Mosul taken by 19th-century travelers—and preservationists will doubtless avail themselves of these old-fashioned tools if and when they get the chance to rebuild. Memories can be made real. But so far, time travel still eludes us.